The question for the left, is whether we can transform the operation of the European Union. It's the same question asked by the left about any state institutions – whether it's the local council, the national government, or any transnational institution. We have the opportunity to re-route the referendum debate away from Tory Brexit and into a debate about the democratic future of Europe.

June 15, 2016 John McDonnell Ree Pepper
Printer friendly
It’s time for the left to save the Europe debate from the Tories Published June 15, 2016 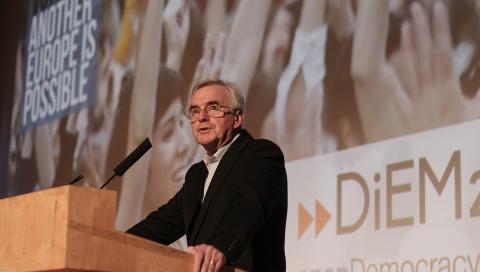 John McDonnell speaks to the Another Europe is Possible conference.,Steve Eason

The Tories seem to be transposing the gang warfare of the Eton playground and the battles over the Tory leadership succession on to our national political scene. It's rancorous, personal and bitter and has degenerated into name-calling and the hyperbole of Project Fear, with ludicrously exaggerated claims and counter-claims from both sides of the Conservative Party. Johnson's comparison of the EU with the Third Reich, and Cameron's claims of impending World War Three – they just beggar belief. The economic argument has degenerated into, on one hand, a description of economic paradise post-Brexit and outside the single market; and, on the other hand, a near Pompeii-like condition of the City of London and the economy if we leave the EU.

We just cannot go on like this. We cannot let the Conservatives and the rest of the right drag this debate into the intellectual gutter. Our country and our people deserve better than this. We must not allow the decision over the future role of Britain in Europe to become embroiled any further in the in-fighting over who is to be the next leader of the Tory Party; or the exploitation of people's insecurities by the far right.

Time to step in

So it's time now for those on the left and on the progressive spectrum to step in, and it's our job to retrieve this debate and save it from the right. The nature of the debate on the left should be in dramatic contrast to that on the right, and I think it already is. It has to be collegiate and, in Labour Party terms, comradely – a discussion among friends and allies who seek the same goal but offer a different route and a mechanism to achieve that goal. So let's appreciate that there are those on the left who have a principled, rational and coherent argument why we should vote to leave. But we just believe they're wrong.

Let's look at where we agree. First, on the left and on the progressive spectrum we all accept that many of the immensely critical issues we face are transnational and they require transnational political solutions. Second, our consciences don't end at the Channel, or at the North Sea.

I want to look at some of the examples of some of the transnational challenges we face. On energy, and creating the energy to light and warm our homes and power our industries: to be frank, I don't want to poison the air breathed by families in Paris, Madrid or Athens; or put their very existence, or their descendants’ existence, at risk of cataclysmic consequences of climate change. We know the EU is, and could be, an even more critical part of that much needed transnational architecture to respond to climate change. That's one of the reasons why we want to remain in.

On resources, to rise to the challenge of poverty and inequality both in Britain and across Europe, we need to harvest the resources of this rich continent effectively and fairly and wisely. How, in all conscience, can we turn a blind eye any more to the City of London effectively operating like a funnel to offshore tax havens for the taxes of transnational corporations and the super-rich. The taxes that should be paid to fund healthcare for the sick, the care for the elderly, the education of our young and tackling poverty – public funding that's desperately needed, not just in this country but right the way across Europe. We know that if we clamp down here, the tax evaders and avoiders will move elsewhere. That's why European agreements are necessary, and which form the basis of global agreements to track down and confront tax evasion and avoidance. That's why we need to stay in.

We shouldn't be able to sleep at night when we see refugee children's bodies washed upon the beaches of the Mediterranean. Memories are often sadly short. Europe learned the harsh truth, after the second world war, of the consequences of the barbarity of war and conflict. It faced then a refugee crisis on a scale never witnessed before. But by coordinated transnational cooperation across Europe, refugees in their millions were supported and resettled. It took time and concerted action across the whole of Europe. Vital lessons were learned about how to prevent, resolve and respond to conflicts. Setting up the Europe-wide institutions to bring people together was one of those lessons. If the European Union was eventually established for anything, to be frank, it was to ensure that we could come together effectively to rise to those humanitarian challenges on our shores. We should do nothing that puts at risk the institutions that enable us to take this coordinated response, to be organised to tackle the refugee crisis. That's another reason for staying in.

And it's important that on the left we don't avoid the issue of free movement and immigration, which is inevitably coming to the fore in this debate. None of us underestimate people's anxieties and emotions on this issue. We know that if we ignore it, we do so at our peril. So it has to be confronted head on.

The British have been and, almost certainly, will continue to be one of the greatest beneficiaries of the free movement of people across Europe. Whether it's the Brits retiring to the warmth of the sun, or the quiet countryside of rural France, or the beaches of Greece, or our young people increasingly opting to study and work across Europe, or British workers taking work elsewhere when our own economy is slowed, it's the British who are reaping the rewards of travel and settlement that free movement brings us. Inward migration often keeps our own economy afloat, filling the skills gaps and supporting an ageing population to pay its way. I speak as the grandson of an Irish immigrant and, I have to tell you, it's been the case for almost a century and a half that migrants have supported this economy and kept it afloat. I'm proud that it was often Irish men who built most of the infrastructure on which you travelled to get here today, many of the buildings we work in and hold these meetings in; and it was Irish women nurses who populated the NHS, cared for the elderly, taught in our schools, and worked in the factories that rebuilt the economy after the second world war and beyond. I'm proud of being the grandson of a migrant worker.

But we have to be straight with people as well. Of course migration, on any scale, presents its problems of integration and pressure on public services. But all of these problems can be readily overcome. The vast bulk of the evidence demonstrates that migrants pay more into the economy than they take out. And, despite general concerns about migration, all the evidence shows that on a one-to-one basis and within communities, the nature of British people is to be extremely welcoming to incomers. People generally just want to get on with each other and live in peace and harmony.

Austerity is to blame

We mustn't let the Tories use immigration as a smokescreen for the cuts in public expenditure that they've introduced as austerity. Our public services – the NHS in particular – and our housebuilding and infrastructure programmes would be in real difficulties but for the staff coming from across Europe. Where there are pressures in a particular area, the simple and obvious solution is specific programmes of government support to deal with them. It's not rocket science.

We have a duty also to address the issue of migration in a way that's positive in its view that a community can respond to receive the benefits of migration at the same time as overcoming some of the short-term issues.

The question for the left then, is whether we can transform the operation of the European Union. It's the same question asked by the left about any state institutions – whether it's the local council, the national government, or any transnational institutions. The strategy we pursued on the left, in the past and now, has been described traditionally as 'in and against the state'.

So, finally, that's the challenging question posed to the modern left. Can we, and how can we, democratically transform our European institutions? The optimism is based upon this: for the first time in over a generation there are movements and political forces mobilised and mobilising across Europe to respond to that challenge, but responding to it increasingly together. We have the opportunity now, from today, to re-route the referendum debate away from Tory Brexit; and into a debate about the democratic future of Europe, about 'another Europe': a Europe that is not just possible, but urgently and vitally needed.

John McDonnell is the Labour Party Shadow Chancellor.  He was speaking at the Another Europe is Possible Conference (speech transcription is by Ed Dingwall).