'Indian Point' directed by Ivy Meeropol takes an unblinking look at the dramatic debate over nuclear power by going inside the aging plant that looms just 35 miles from New York City. With over 50 million people living in close proximity to the facility, it has stoked a great deal of controversy in the surrounding community, including a vocal anti-nuclear contingent concerned that the kind of disaster that happened at Japan's Fukushima nuclear plant could happen here, 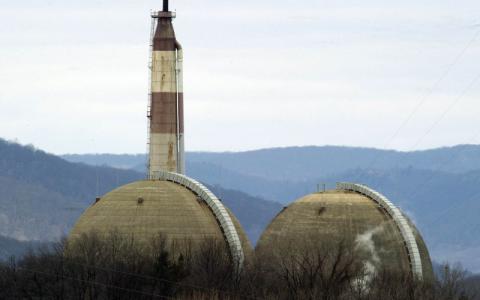 This new documentary shows the lengths the nuclear industry will go to put the public at risk.

Gregory Jaczko was chairman of the U.S. Nuclear Regulatory Commission when Japan’s Fukushima power plant suffered a major meltdown in 2013. An advocate of tightening safety controls at America’s aging nuclear facilities after the Fukushima disaster, Jaczko soon discovered that despite his concerns, the influence of profit-hungry corporations over the NRC was affecting its ability to adequately police the industry—and putting the public in danger.

“When I served as chairman [of the NRC], there appeared to be commissioners who were more interested in industry conditions, that the NRC’s job was to protect the industry from the staff of the NRC,” Jaczko told The Daily Beast. “A lot of times, they said the staff was being too aggressive.”

Jaczko’s concerns, and his eventual ouster from the NRC, are part of a larger story told in Indian Point, a new documentary that screened at the Tribeca Film Festival. Named after the electricity-generating nuclear reactor just 35 miles from New York City, the film is a cautionary tale about a technology once seen as an abundant and non-polluting energy source, but with downsides that could make oil spills and electrical brownouts seem as minor as a fender bender.

Nuclear technology entails “accident risks, security risks, and the long-term problem of what to do with toxic wastes,” says Philip Musegaas, a former attorney for the environmental organization riverkeeper.org, which has been concerned with the effect of Indian Point’s cooling systems on the Hudson River’s ecology. “All of these reactors are based on designs from the 1950s,” Musegaas, who appears in the film, told The Daily Beast. “It’s an old technology, expensive to maintain, and requires multiple safety systems. There are simpler, cheaper ways to generate power.”

The first nuclear power plant went online in Russia in 1954. Today there are an estimated 439 plants in 31 countries, 99 in the U.S. alone.

Nuclear provides nearly 20 percent of all power generated in this country, and more than 120 million Americans live within 50 miles of a nuclear power plant. Sometimes this proximity seems a little too close for comfort: the Limerick plant in Pennsylvania is only 21 miles from Philadelphia, and 6 percent of the U.S. population—about 19.3 million people—lives within 50 miles of the Indian Point facility.

“These plants are running smoothly for the most part,” says Ivy Meeropol, director of Indian Point, “but there’s that what if, if something happens.”Disasters like Three Mile Island, Chernobyl, and Fukushima have certainly made the public aware of nuclear’s volatility, but a 2013 poll found that 57 percent of the American public favors using nuclear power to generate electricity.

Yet Jaczko, whom the film alleges was ousted because of his views (his was the only dissenting vote on plans to build the first American nuclear plant in 30 years) is not alone in his concern about safety issues, and the industry’s reliance on old, outdated technology. Indian Point’s two reactors went online in 1975 and 1976, respectively, and, says Meeropol, “most of the plants in the U.S. are as old as Indian Point or older. Plants all over the country are having to replace major parts, they are just trying to fix things all the time. That’s a problem the entire industry has.”

Then there’s the issue of toxic waste. The fuel rods in these plants are highly radioactive, and can stay that way for 200,000 years. When they are spent, they need to be stored somewhere. The issue of what to do with this waste has never really been resolved, which means, says Musegaas, “Indian Point and other plants have become de facto toxic waste dumps for nuclear fuel.” According to the film, there is three times more toxic waste stored at Indian Point than there was in Fukushima.

Indian Point also delves into the environmental effect some of these plants have on our nation’s waterways. The fuel rods need to be constantly cooled, which means, in the case of a plant like Indian Point, 2.5 billion gallons of water are pulled from the Hudson every day, heated up when it passes through the plant, and dumped back in the river—a process that can kill millions of fish. “It’s mind-boggling how much life is going through the cooling system of this plant and getting toasted,” says Riverkeeper boat captain John Lipscomb in the film.

Given all these problems, it’s unsurprising that opposition to the Indian Point plant has been ongoing for decades.

Every nuclear facility has been licensed to operate for 40 years, and has the right to apply for a 20-year license extension. New York Governor Andrew Cuomo has gone on record opposing re-licensing Indian Point, wants the plant closed, and has been joined in the fight by activist groups.

In 2010, the New York State Department of Environmental Conservation ruled the plant was in violation of the Clean Water Act, because "the power plant’s water-intake system kills nearly a billion aquatic organisms a year, including the shortnose sturgeon, an endangered species.”

Because of this, Indian Point has been denied a water quality certificate, essential to a license renewal. Yet the plant is still operating.

Not all nuclear plants have the same issues and engender the same opposition. But there is little doubt that there is no energy-related industry that has the kind of downside nuclear has. Combined with the current cost to build a nuclear power plant—somewhere in the $2 billion range—this could mean that fuel alternatives like natural gas, wind, and solar will soon phase out the nuclear industry.

“Short term, you will see plants continue to operate,” says Musegaas, “but there is enormous economic pressure on these plants. In the long term, I think nuclear power is dead. You don’t see many new plants being built There is also regulatory pressure, upgrades after Fukushima, that will cost some plants some money.”

Adds Jaczko: “The best thing to do is to figure out how to close it down. The best solution is to negotiate a narrow period of operation, so you can transfer the electricity generation and do it in a responsible way. If you can’t get your neighbors in the community to accept the plant, something’s not working.”

First Run Features announces the US theatrical premiere of Ivy Meeropol's documentary IIndian Point  at The Film Society of Lincoln Center in New York on July 8, 2016, with Los Angeles to follow on July 22, 2016 at Laemmle Theatres.

First Run adds in its press release: "The debate at the center of 'Indian Point ' is more timely now than ever. In February of 2016, news broke that the groundwater below Indian Point had been contaminated with radioactive material, prompting a state investigation."