Why are Mexican Teachers Being Jailed and Killed for Protesting Education Reform?

They're peacefully resisting US-style neoliberal measures intended to crush the unions-a backbone of Mexico's social-justice movements. Taking union leaders hostage, murdering unarmed teachers and students, firing thousands, and closing one of Mexico's most progressive institutions are serious violations of human and labor rights, and of the rule of law itself. Now, 200,000 doctors to join teachers in Mexico national strike. 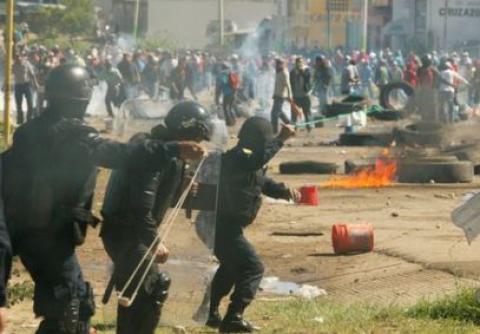 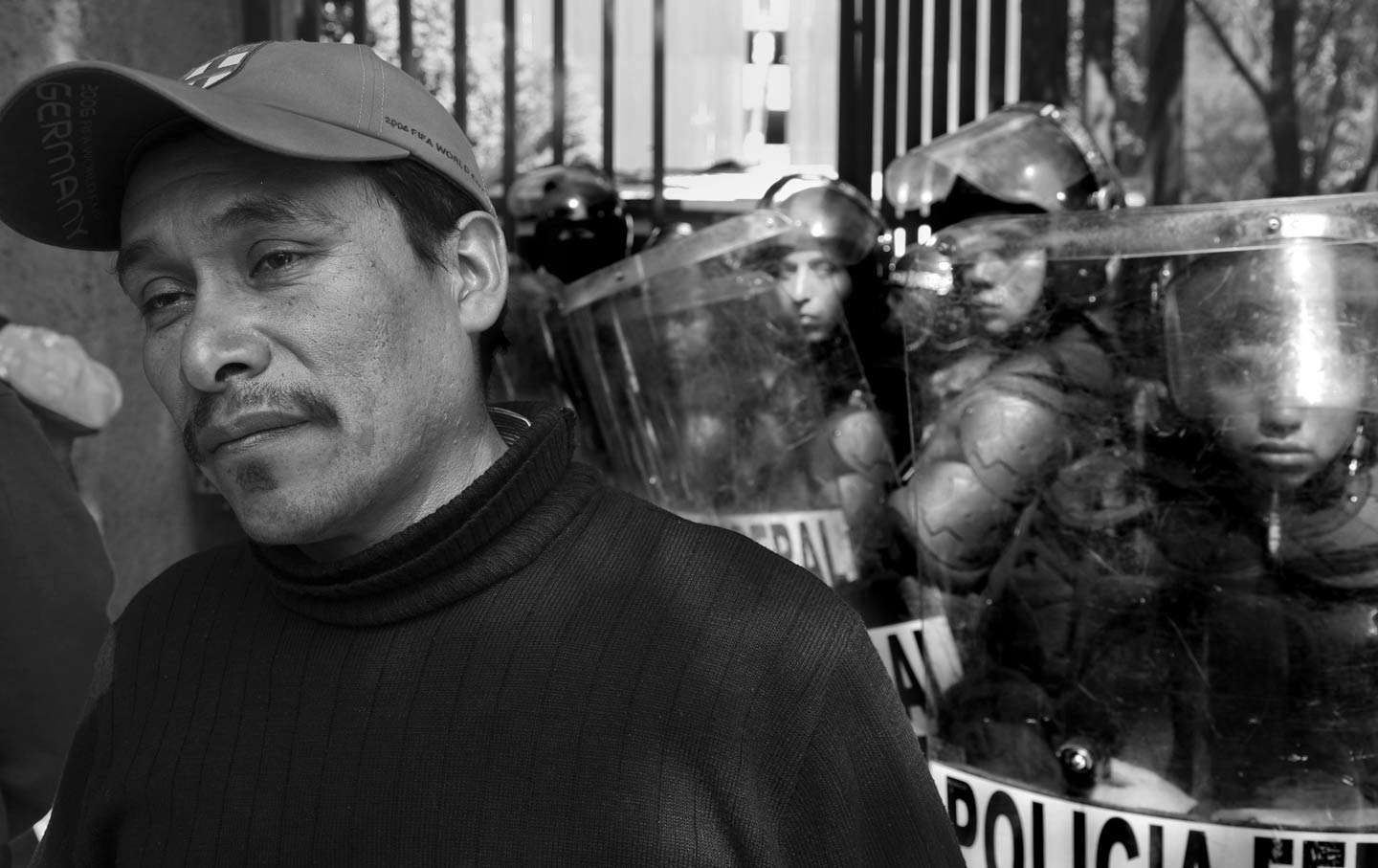 A striking teacher from Michoacán demonstrates in Mexico City in front of a line of police. Canadian and US teachers have organized the TriNational Coalition to Defend Public Education to support Mexican teachers' efforts to defeat proposals to introduce standardized testing and remove job protections, which have come from USAID and private foundations promoting corporate education reform.
Photo: David Bacon
﻿On Sunday night, June 12, as Ruben Nuñez, head of Oaxaca’s teachers union, was leaving a meeting in Mexico City, his car was overtaken and stopped by several large king-cab pickup trucks. Heavily armed men in civilian clothes exited and pulled him, another teacher, and a taxi driver from their cab, and then drove them at high speed to the airport. Nuñez was immediately flown over a thousand miles north to Hermosillo, Sonora, and dumped into a high-security federal lockup.

"Their detention is.a warning of what can happen to other teachers." -Luis Hernández Navarro, La Jornada

﻿Just hours earlier, unidentified armed agents did the same thing in Oaxaca itself, taking prisoner Francisco Villalobos, the union’s second-highest officer, and flying him to the Hermosillo prison as well. Villalobos was charged with having stolen textbooks a year ago. Nuñez’s charges are still unknown.

Both joined Aciel Sibaja, who’s been sitting in the same penitentiary since April 14. Sibaja’s crime? Accepting dues given voluntarily by teachers across Oaxaca. Sección 22, the state teachers union, has had to collect dues in cash since last July, when state authorities froze not only the union’s bank accounts but even the personal ones of its officers. Sibaja was responsible for keeping track of the money teachers paid voluntarily, which the government called “funds from illicit sources.”

The three are not the only leaders of Oaxaca’s union in jail. Four others have been imprisoned since last October. “The leaders of Sección 22 are hostages of the federal government,” says Luis Hernández Navarro, a former teacher and now opinion editor for the Mexico City daily La Jornada. “Their detention is simultaneously a warning of what can happen to other teachers who continue to reject the [federal government’s] ‘education reform,’ and a payback to force the movement to demobilize.”

The arrests are just one effort the Mexican government has made in recent months to stop protests. On May 19, Education Secretary Aurelio Nuño Mayer announced that he was firing 3,000 teachers from Oaxaca, Guerrero, and Michoacán for not having worked for three days.

All three states are strongholds of the independent teachers movement within the National Union of Education Workers–the National Coordination of Education Workers (the CNTE, or “Coordinadora”). CNTE teachers have been striking schools since earlier this spring to stop implementation of the government’s education reform program. While strikes in Mexico are hotly contested, there is no precedent for firing teachers in such massive numbers just for striking.

The night of the firings, federal police attacked and removed the encampment that teachers had organized outside Mexico City’s education secretariat. On June 11, the police in Oaxaca City moved to dismantle a similar encampment in front of the state’s education office. When 500 heavily armed police advanced shooting tear gas, confrontations spilled into the surrounding streets, reminiscent of the way a similar strike in 2006 was attacked, and then mushroomed into an insurrection that lasted for months.

One measure could end the system of teacher training schools, which have been hotbeds of social protest for decades.

﻿One controversial provision of the federal government’s education reform requires teachers to take tests to evaluate their qualifications. Those not making good marks are subject to firing. This year, when the government tried to begin testing, teachers struck in protest.

In March, when Nuño tried to give awards to “distinguished and excellent teachers,” one of them, Lucero Navarette, a primary-school teacher in Chihuahua, told him, “The results can depend on many factors and the personal circumstances each one of us live through…many don’t get the result they deserve, because the job they actually do at school is very different from what comes out in the test.” Journalist Hernández Navarro says educators have a tradition of egalitarianism and mutual support, and believe that “there are no first- or second- or third-class teachers. Only teachers.”

Similar measures have been advocated by a Washington think tank, with funding from USAID.

﻿On March 22 Nuño also announced a measure that would spell the end to Mexico’s national system of teacher training schools, called the “normals.” Instead of having to graduate from a normal, he said, anyone with a college degree in any subject could be hired to teach. Since the Mexican Revolution and before, the normals have been the vehicle for children from poor families in the countryside, and from the families of teachers themselves, to become trained educators. Returning to rural and working-class communities, teachers then often play an important role in developing movements for social justice. The normal schools themselves have historically been hotbeds of social protest and movements challenging the government.

Guerrero’s normal school in Ayotzinapa was the target two years ago of an attack that led to the disappearance and possible murder of 43 students, which has since galvanized Mexico. Recently a commission of international experts criticized the Mexican government for refusing to cooperate in efforts to identify the fate of the students, and pointed to the possible involvement of officials at very high levels in their disappearance.

Firing teachers and disbanding the normals is a not-so-hidden goal of the federal education reform. The Organization for Economic Cooperation and Development has called for abolishing the normal schools, and urged President Enrique Peña Nieto to fire teachers who get bad test results and exclude them from teaching. Similar measures have been advocated by a Washington think tank, the Partnership for Educational Revitalization in the Americas, a project of the Inter-American Dialogue with funding from USAID.

Both organizations work in cooperation with the corporate Mexican education reform lobby, Mexicanos Primero, headed Claudio González Guajardo, a member of one of the country’s wealthiest families. González instructed Peña Nieto that “Mexicans elected you, not the [teachers] union,” and told him to “end the power of the union over hiring, promotion, pay, and benefits for teachers.”

Oaxaca has become a target because Sección 22 proposed its own alternative education reform over six years ago, which concentrated on respecting indigenous culture and forging alliances between teachers, students, parents, and their communities (for more on the alternative reform proposals and the corporate sector’s attacks on teachers, see “US-Style School Reform Goes South)”). After the insurrection of 2006, the union became the backbone of the left’s effort to defeat the ruling Institutional Revolutionary Party (PRI), and in 2010 Oaxacans for the first time elected a non-PRI governor, Gabino Cué. Owing his election to the teachers, Cué agreed to begin implementing their reform instead of the federal one.

In 2012, however, the PRI regained control of the federal government. Under its pressure, Cué reneged on his commitment to Oaxaca’s teachers and announced that he would implement the federal reforms instead. Protests started immediately, and have escalated since then.

With the left in Oaxaca badly divided, the PRI regained control of the state government as well in voting on June 6. The arrests of the two top leaders of Sección 22 followed in less than a week.

Since the 1970s, when over 100 teachers were murdered during the years when the Coordinadora was organized, the CNTE has won control of the union in Oaxaca, Guerrero, and Michoacán, and it has a strong presence in several other states. Nationally, it has become an important base of the Mexican left. It is one of the most powerful opponents of the government’s embrace of free-market and free-trade policies. Weakening the union and the role of teachers in politics is therefore an important political goal for González and Mexico’s corporate elite, as well as the national political parties moving the country to the right.

When Hernández Navarro calls the leaders of Sección 22 hostages, it’s no exaggeration. On June 11, President Peña Nieto announced that he would only talk with the teachers if they agreed to two conditions. “The Government of the Republic repeats that it is open to dialogue only when they comply with two conditions: returning to work in the schools of Chiapas, Guerrero, Michoacán, and Oaxaca, and accepting the Education Reform.”

Taking union leaders hostage, firing thousands, and closing one of Mexico’s most progressive institutions are serious violations of human and labor rights, and of the rule of law itself. The support the corporate-friendly Mexican reforms get from US political institutions makes it incumbent on those institutions to speak out against these violations as well. It is time to stop that support. Instead, teachers in the United States, who are resisting similar reforms, should stand in solidarity and help free their Mexican colleagues, which would give them some breathing room as they continue their fight.

[David Bacon is author of Illegal People - How Globalization Creates Migration and Criminalizes Immigrants (2008), and The Right to Stay Home (2013), both from Beacon Press.]
Copyright c 2016 David Bacon. Reprinted with permission of the author.
200,000 Doctors to Join Teachers in Mexico National Strike
June 21, 2016
teleSur 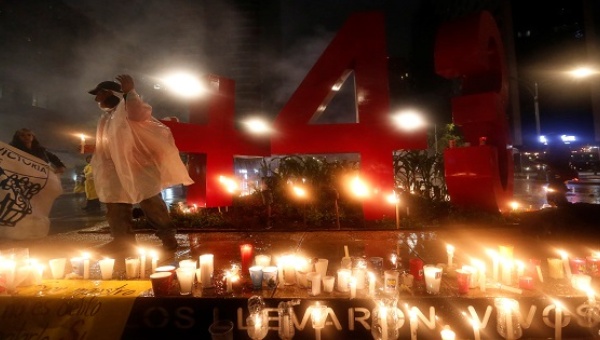 A protester from the CNTE teachers' union gestures during a vigil following clashes in southern Mexico over the weekend between police and teachers, Mexico City, Mexico, June 20, 2016.
Photo: Reuters // teleSur
Doctors' leaders have condemned the killings during a teacher's protest last Sunday in the state of Oaxaca.

As protests led by the militant CNTE teachers' union in Mexico continue, the country's doctors are set to join in the job action, calling for a national strike on June 22 to protest a neoliberal reform to the health system imposed by President Enrique Peña Nieto.

The group #YoSoyMedico17, which is comprised of doctors, pediatricians, surgeons, anesthesiologists and nurses, has been joined by more than 200,000 physicians from 32 states in opposing the so-called Universal Health System reform by Peña Nieto. The medical professionals say the measure is a "disguised way of privatizing health in Mexico," and said doctors were not consulted on the reform, according to Animal Politico.

Doctor’s also condemned the killing of at least eight people during a teachers' protest last Sunday in the state of Oaxaca, and denounced what they call intimidation and repression by authorities, as well as organized crime.

According to doctors, as violence has increased in Mexico they have suffered the consequences of crimes like kidnappings, enforced disappearances and killings that have gone unpunished by authorities.

President Peña Nieto has introduced a number of radical measures, including 11 neoliberal structural reforms in education, health and the energy sector, during his first 20 months.

Tens of thousands of teachers have been protesting since May, demanding a meetings with Peña Nieto and his ministers to discuss the education reform. However Peña Nito and his education minister, Aurelio Nuño, have refused to talk with the union leaders.

The doctors' protest will join the ongoing national general strike by teachers.