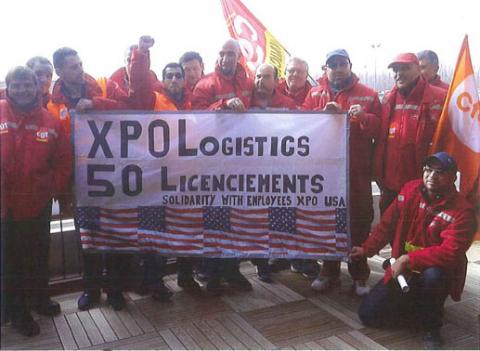 Workers in France demonstrate in solidarity with XPO workers in the U.S. last month.,

The drivers’ strike, which culminated in a march and demonstration in Wilmington Monday afternoon, is the most visible of an international series of worker actions. Workers struck at XPO Cartage and XPO Port Services, XPO Logistics subsidiaries that move goods between the ports and rail lines, warehouses and distribution centers. They serve clients in almost every industry, from retail to aerospace to the Department of Defense. [Drivers also struck K&R Transportation, California Cartage Warehouse and Intermodal Bridge Transport.]

XPO Logistics has expanded rapidly in recent years, mostly by gobbling up other companies. “Through 17 acquisitions in the past four years as well as internal expansion, XPO has gone from a company that didn’t exist in late 2010 to a $15 billion firm today,” DC Velocity reported late last year.

Upon the October purchase of Con-way, the largest of the acquired firms, XPO CEO Bradley Jacobs said, “We’re moving quickly to eliminate redundancies and leverage our scale to better serve our more than 50,000 customers.” Indeed, layoffs began shortly thereafter.

Earlier last year, XPO had acquired French logistics group Norbert Dentressangle SA, making it a major player in Europe as well as North America. French workers and their unions say XPO has broken a promise not to lay off any workers for at least 18 months.

The rapid series of acquisitions left industry watchers wondering if the company bit off more than it could chew, and the stock price has fallen more than 40 percent from its May 2015 high. [XPO Logistics has not responded to an invitation to comment.]

Catching up to the rapid expansion of XPO, workers and unions have begun working together. Interestingly, the purchase of Norbert Dentressangle made XPO Logistics into a double-breasted company at the international level, since a significant portion of their European workforce is unionized. The International Transport Workers Federation convened unions from Belgium, France, the Netherlands, Spain, the UK and the United States in April to study XPO and discuss strategy. The international coalition of unions took a united stance at XPO Logistics’ May shareholder meeting.

Jeff Farmer, national organizing director for the International Brotherhood of Teamsters, is optimistic about the potential leverage workers can bring about by working together across borders, particularly with the involvement of a unionized European workforce. “The company tried to divide us, telling the European unions ‘we have a good relationship [with you], but with the Teamsters it’s different.’ The other unions said, ‘if you don’t talk to the Teamsters, don’t expect to talk to us.’ The support is there one hundred percent, and it’s a two way street.”

A message from the London office of the International Transport Workers’ Federation to the Teamsters on the eve of the strike assured those in California that “we share your concerns over the company’s massive merger and acquisitions, which will lead to the loss of employment, lowered pay and benefits, social dumping, wage theft and degradation in safety standards…”

XPO Logistics is clearly at a precipice, having made a massive bet on expansion, both financially and operationally. The driver dispute in southern California could cause some serious pressure, as drivers claim they are misclassified as independent contractors, while XPO subsidiaries cling to a business model that lets them avoid the responsibilities and costs of actually employing drivers. According to union representatives, with 800 drivers’ pending claims against XPO subsidiaries and an average award of $261,000 per driver for those found to have been misclassified, XPO Logistics could be looking at a $200 million liability.