labor Tim Kaine Has a Troubling Record on Labor Issues

“Kaine did meet with union leaders in Madison. But he supported Virginia’s right-to-work laws during his gubernatorial campaign and his four years in office. Even the group that seeks to expand these laws [the National Right to Work Foundation] concedes Kaine did few things that troubled them.” 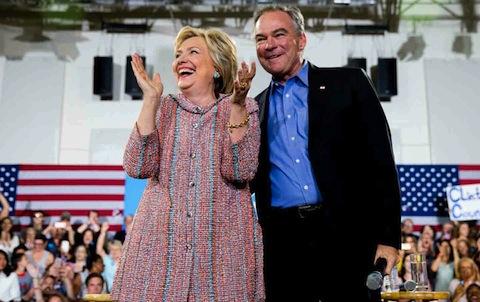 The Democratic Party platform that delegates are expected to approve at next week’s convention in Philadelphia absolutely endorses labor rights—spelling out clear support for union organizing and collective bargaining and pushing back against state-based and national attacks on the ability of workers to demand representation and a voice in the workplace.

“Democrats believe so-called ‘right to work’ laws are wrong for workers—such as teachers and other public employees who serve our communities every day—and wrong for America,” the document declares. It goes on:

We will continue to vigorously oppose those laws and other efforts that would eliminate dues check-off procedures, roll-back prevailing wage standards, abolish fair share requirements, restrict the use of voluntary membership payments for political purposes, attack seniority, restrict due process protections, and require annual recertification efforts. We oppose legislation and lawsuits that would strike down laws protecting the rights of teachers and other public employees. We will defend President Obama’s overtime rule, which protects of millions of workers by paying them fairly for their hard work.

That’s a fair expression of where most Democrats stand on labor issues—especially with regard to the fight against the noxious “right-to-work” laws that have been advanced by Republican governors such as Wisconsin’s Scott Walker and Michigan’s Rick Snyder.

But that’s not where Virginia Senator Tim Kaine has stood on labor issues—especially the fight against right-to-work laws. Kaine’s no anti-labor zealot; his Senate voting record is highly rated by the AFL-CIO. But, as The Washington Post noted when the former Virginia governor was preparing his 2012 US Senate bid, “Kaine has supported Virginia’s right-to-work law since he ran for governor in 2005, and his campaign says that position has not changed.”

Kaine, whom Hillary Clinton named as her vice-presidential running-mate Friday, is a congenial and well-regarded senior Democrat. He’s close to President Obama and has been a reasonably reliable member of the Democratic Caucus since his election to the Senate in 2012. A social-justice Catholic who took time off from Harvard Law School to work as a missionary in Honduras, he has in recent years earned high ratings from the Planned Parenthood Action Fund and NARAL Pro-Choice America. As a serious student of the constitution, he had pushed back against executive overreach, especially on matters of war and peace. He has worked with the American Civil Liberties Union, championed international human rights, and consistently advocated for racial justice in a Southern state that not that many decades ago mounted a “massive resistance” to integration.

Yet Kaine has a history of breaking with labor and progressives on economic issues—to such an extent that headlines refer to the senator as “a Democrat Wall Street can like.” He has argued for looser banking regulations and was a leading advocate of granting fast-track authority for the unpopular Trans-Pacific Partnership trade deal.

Charles Chamberlain, the executive director of the progressive group Democracy for America, said Friday night that, while his group remains committed to helping the Democrats defeat a Republican ticket led by Donald Trump (an ardent critic of the TPP), “Kaine’s support for fast-track authority for the job-killing Trans-Pacific Partnership and recent backing of bank deregulation will make our work more difficult.”

The independent Bernie Delegates Network—which surveyed Bernie Sanders delegates about vice presidential prospects—announced that “it is clear that Bernie delegates overwhelmingly disapprove of the choice of Tim Kaine as VP running-mate.”

Kaine is an able communicator who will, undoubtedly, reach out to the skeptics—with the explanations and clarifications that politicians frequently provide when they join national tickets. The AFL-CIO, which has already endorsed Clinton, will talk him up. But for a good many labor stalwarts, Clinton’s choice could be difficult to accept.

That’s because Kaine has such a long history of defending his home state’s right-to-work law. A decade ago, when he was serving as governor, Kaine referred to Virginia’s right-to-work measure as “a law I strongly support.”

Five years ago, when he was serving as chairman of the Democratic National Committee, Kaine met with union leaders in Wisconsin. A Virginia Republican legislator claimed Kaine had gone soft in his opposition to “right-to-work reform measures.”

PolitiFact Virginia checked things out and concluded: “Kaine did meet with union leaders in Madison. But he supported Virginia’s right-to-work laws during his gubernatorial campaign and his four years in office. Even the group that seeks to expand these laws [the National Right to Work Foundation] concedes Kaine did few things that troubled them.”