July 28 Chelsea Manning found out she is yet again being threatened with the possibility of indefinite solitary confinement. In a jarringly callous move, Army officials are charging Chelsea with “offenses” related to her suicide attempt earlier this month. If convicted, her punishment could be indefinite solitary confinement, reclassification into maximum security, and an additional nine years in medium custody. Her chance of parole may be negated. 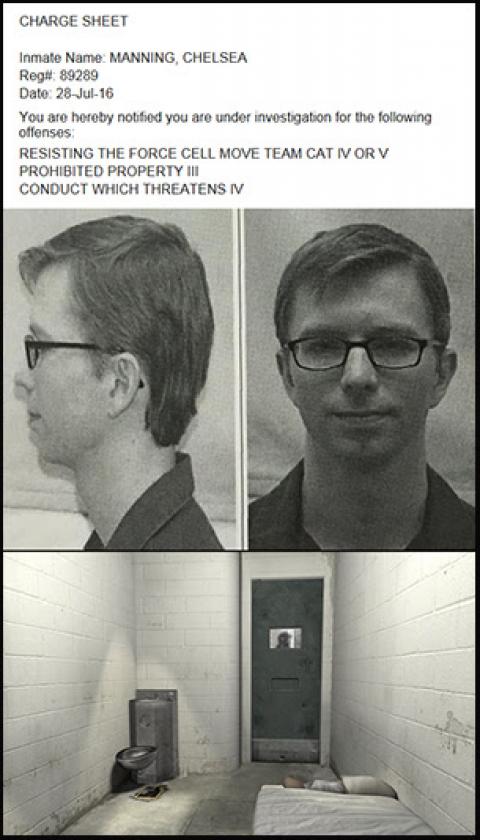 Read the charge sheet here, dictated over the phone by Chelsea to a Support Network volunteer.

“It is deeply troubling that Chelsea is now being subjected to an investigation and possible punishment for her attempt to take her life. The government has long been aware of Chelsea's distress associated with the denial of medical care related to her gender transition and yet delayed and denied the treatment recognized as necessary,” said ACLU Staff Attorney Chase Strangio.

“Now, while Chelsea is suffering the darkest depression she has experienced since her arrest, the government is taking actions to punish her for that pain. It is unconscionable and we hope that the investigation is immediately ended and that she is given the health care that she needs to recover.” Read more here

Chelsea has already faced indefinite solitary confinement threats last year, for innocuous institutional offenses, such as having an expired tube of toothpaste.

Our friends at Fight for the Future have created a petition where you can sign on to a letter condemning the US Army’s attack on Chelsea.

Write the Secretary of the Army

Pressure the Secretary of the Army to take a personal interest and dismiss these cruel and absurd charges against Chelsea.

This May, Chelsea's appellate team filed a brief beginning her appeal process. Your support is critical, not just to continue fighting these ongoing threats from prison officials, but to help challenge Chelsea's draconian 35-year prison sentence and her unjust Espionage Act conviction.

Thank you to those who have already contributed, and to everyone who continues to support Chelsea during this long and strenuous process.

Legendary whistleblower Chelsea Manning, who was sentenced to 35 years in federal prison for leaking documents to Wikileaks, attempted suicide in early July after years of mistreatment and abuse at the hands of the US government.

And now, US military officials have informed her that she faces serious new charges related to her suicide attempt – after denying her access to mental health care and holding her in conditions that the UN considers to be torture.

This is obscene: We can’t let the US government get away with this abuse of power.

If convicted of these trumped up charges, Chelsea faces:

There’s one reason that the US government is trying to punish Chelsea for attempting to take her own life: To silence her voice for good.

But we won’t be silent. And only our support can get the government to back off.

This is not the first time the government has gone after Chelsea Manning and threatened her with bogus charges.

Last year, we and our allies gathered more than 100,000 signatures when the government tried to put Chelsea in indefinite solitary confinement for having LGBTQ reading materials and an expired tube of toothpaste.

Only our outcry kept her out of solitary confinement then, and only our action can help Chelsea now.

Sign the petition: Tell the government to stop the harassment and drop these new administrative charges against Chelsea Manning now!

Fight for the Future

After years of extreme mistreatment, having been held in conditions that the UN considers to be torture, Chelsea Manning, the Guardian columnist and whistleblower who has been in prison for years serving a 35 year sentence for exposing some of the U.S. government’s worst abuses, attempted to take her own life July 5th, 2016.

Now, Army officials have informed her that she is facing serious new charges directly related to her suicide attempt.

This is an outrage. Click here to sign the petition telling the government not to charge Chelsea Manning with a crime for her own suicide attempt.

Chelsea called supporters on the phone to inform us of the new charges. They include:

1) Resisting the force cell move team (Chelsea was unconscious when this team arrived, which makes this charge particularly absurd.)

2) Prohibited property (For the items she used to attempt to take her own life.)

3) Conduct which threatens (For somehow putting the prison at risk while attempting to take her own life, quietly, in her own cell.)

If convicted of these bizarre “administrative offenses,” that are effectively charging her for attempting to end her life, she is facing indefinite solitary confinement for the rest of her prison term (another 30 years), “maximum security” classification (in the same facility), and nearly a decade before she can ever be classified as a “minimum security” prisoner.

The government has threatened Chelsea with torture like this before, but we mobilized and kept her out of solitary confinement. Now we need to do it again. Click here to sign the petition demanding that the government drop these now charges and provide her with adequate medical care.

It is unnecessarily cruel to threaten Chelsea with additional punishment while in this very vulnerable state. The government is trying to silence her important voice––for good. Chelsea has been systematically mistreated by the U.S. government since she was first taken into custody in 2010, including long stretches of extreme solitary confinement even before she had ever been convicted.

Chelsea is a transgender woman being forced to serve out her sentence in an all-male prison, which is in itself dehumanizing and exhausting emotionally. She is currently being denied medical treatment for her gender dysphoria, which experts have stated is the only course of treatment through which she would no longer be suicidal.

This is not the first time the government has harassed Chelsea with outrageous charges while in prison. Last year, they threatened her with indefinite solitary confinement for minor “infractions” including possession of LGBTQ reading materials and an expired tube of toothpaste. We gathered more than 100,000 petition signatures in response, and the outcry we generated kept her out of solitary. Now we need to do it again.

Please, click here to sign the petition, and then share and spread the word. Chelsea is depending on us. We need everyone to speak out right now.

Thanks so much, we’ll keep you posted on how Chelsea is doing.

-Evan at Fight for the Future