The Need to Stand with Black Liberation 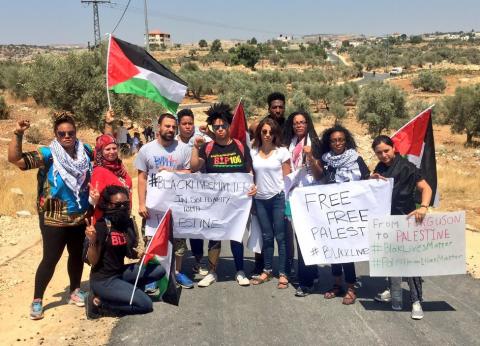 Delegates from the Movement for Black Lives in Bil'in, Palestine last month.,

On the second anniversary of Mike Brown's killing by a cop in Ferguson, we at the US Campaign to End the Israeli Occupation fully endorse the platform and recommit to the urgent work of dismantling the systems that dehumanize Black people, devalue Black lives, and allow for the state to kill Black men, women, and children with impunity. As an organization dedicated to equality, justice, and collective liberation, we stand firmly and proudly with the Movement for Black Lives.

As the platform so eloquently articulates: "We are a collective that centers and is rooted in Black communities, but we recognize we have a shared struggle with all oppressed people; collective liberation will be a product of all of our work."

The platform includes an endorsement of BDS (boycott, divestment, and sanctions) and reiterates the need for Black/Palestinian solidarity, an unapologetic and principled position that is forcing a critical conversation among those individuals and organizations striving to be progressive on everything but Palestine, including several pro-Israel groups who have responded by lecturing Black activists on how their struggle should be fought.

The #Vision4BlackLives is a reminder of the power of people to transform society. We strongly urge our supporters and member groups to show up and build with those who are reimagining and actively pursuing a world rooted in historic justice and free from all forms of oppression.

Read and share the policy platform, find campaigns you can support here, and reach out to Black organizers and Black-led organizations in your community, especially during Black August, a month of celebration and community organizing in honor of historic moments in the Black liberation struggle.

Support the Movement for Black Lives. We believe that we will win.