Fight for $15 organizers have a long list of grievances against SEIU. They say they themselves do not get $15/hour. They are worried about the instability of their jobs and a tendency of the union to ramp up staff for one campaign, then shift only some of the staff to the next project. Ultimately, some workers say, SEIU's position may undermine public support and open up lines for employer attacks. See SEIU's response below. 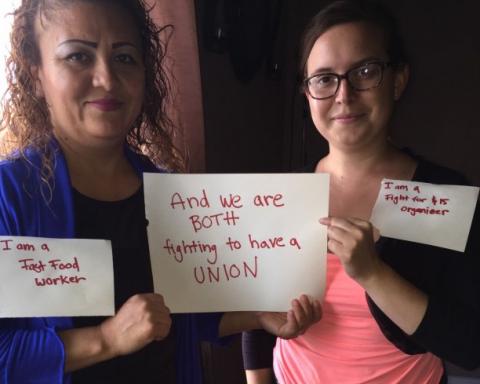 Emiliana Sparaco (R), a Fight for $15 organizer, and Roselva Gomez, a Burger King employee, both of San Diego. , Photo credit - Waging Nonviolence // In These Times

The start to this weekend’s Fight for $15 convention didn’t go as planned.

As roughly 10,000 conference goers gathered in Richmond, Va., to talk about unions and low-wage work, organizers behind the nationwide campaign demanded a union of their own.

On Friday, Jodi Lynn Fennell, a child care worker organizer from Las Vegas, attempted to deliver a letter from a Fight for $15 organizers asking the Service Employees International Union (SEIU) to acknowledge it was their employer and to give them the right to organize.

A small group of supporters accompanied Fennell as she approached the stage where SEIU President Mary Kay Henry was scheduled to deliver the keynote address. But security guards stopped them from delivering the letter and escorted them away from the stage. Later, according to the Union of Union Representatives (UUR), a supervisor told Fennell and four other organizers they had to fly back to Las Vegas early Saturday morning, at their own expense.

Roughly 75 SEIU organizers and other field staff outside of the union’s national headquarters belong to the UUR. But Fennell and UUR Vice President Nicholas Calderon say that SEIU has told the roughly 100 other Fight for $15 field organizers who might be eligible to join the staff union that it doesn’t employ them.

At first, Calderon says, SEIU maintained their employer was the payroll processing firm that handles their paychecks. Now, he says, the international insists they’re employed by the individual organizing committees that direct each city’s Fight for $15 campaign.

According to Calderon, nearly 99 percent of funding for Fight for $15 organizers, as well as vehicles and supplies, comes from SEIU.

"As we have said from the beginning, we are strong believers in the Fight for $15 campaign organizers and workers planned yesterday's action to try to minimize disruption while still having visibility,” Conor Hanlon, UUR president, wrote in a statement to In These Times on Saturday. “We have no interest in stopping the crucial work going on there but do think it important that workers and community allies are aware of how SEIU is treating the Fight for $15.”

“We are disappointed that SEIU chose to escalate and create divisions between workers and organizers rather than act on our shared principles and beliefs about the fair treatment workers deserve,” he continued. “Nonetheless, the Fight for $15 workers will not be silenced and UUR will continue to fight with them until they are recognized as SEIU employees and getting the treatment they deserve."

Fight for $15 organizers have a long list of grievances against SEIU. They are worried about the instability of their jobs and a tendency of the union to ramp up staff for one campaign, then shift only some of the staff to the next project. Others argue that because of the long hours, their relatively modest salaries do not amount to $15 an hour by the time their pay is divided by work hours, often much more than 40 hours a week.

But the biggest grievance organizers express is that SEIU pays them to advocate for the right of every worker to join a union but denies that same right to its own organizers. Ultimately, some workers say, SEIU’s position may undermine public support and open up lines for employer attacks.

Hypocrisy scars an organization, says Fennell, and could weaken the union in its important fight.

Asked to respond to the Fight for $15 organizers' complaints, an SEIU spokeswoman wrote:

SEIU strongly supports the Fight for $15 and a union which was started thanks to the fearlessness and courage of workers living on poverty wages who spoke up, joined together and demanded something better. SEIU supports the ability of all workers across our economy to join together in unions and have a voice at work to improve their lives and the lives of their families and communities, including organizers in the Fight for $15. Many Fight for $15 organizers are already unionized and have executed collective bargaining agreements. Some of the regional fast food unions whose staff are not yet organized have reached out to interested unions to offer a fast and fair process to determine whether organizers wish to be represented by a union. SEIU fully supports that approach.

The initial organizing of Fight for $15 focused on fast-food workers in New York but quickly spread to other occupations and across the country. It includes workers in child care and elder care, early childhood education, university research and teaching, manufacturing, fashion and other building services, many of whom may move frequently from low-wage job to low-wage job over their lives.

The campaign, almost entirely funded by SEIU, can claim credit for raising pay for about 17 million of the roughly 64 million workers less than $15 an hour, with 10 million on the path to $15.

Its progress has come mainly from winning stronger state and local laws—not from any dramatic uptick in low-wage workers forming unions. That is true even in the low-wage industries that, unlike fast food, were already often organized to varying degrees by SEIU and others.

Although the strategy for establishing unions is unclear, Fight for $15 appears committed to expanding the range of workers that SEIU is able to mobilize for direct action. Tactics include strikes at fast food outlets and legislative campaigns for higher minimum wages, whether across the board or piecemeal.

For the past couple of years, the campaign’s emphasis on politics has increased, as illustrated by the choice of Richmond, Virginia, for this weekend’s meeting—billed as the organization’s first convention.

The decision to meet in the capital of the Confederacy also reflected an intensification of efforts to link the problems of America’s low-wage economy to continued structural racism with its roots in slavery. Fight for $15 must fight for both racial and economic injustice, SEIU president Mary Kay Henry told the opening session of the meeting.

“You can’t have one without the other,” she said.

Likewise, you can’t advocate effectively for unions, some Fight for 15 organizers say, without having the right to join one yourself.

It is true that over the labor movement’s long history, many unions have fought with their staff over whether staff could or should organize.

But a movement like the Fight for $15, which is founded on the right of every worker to join a union, is more likely to win broad support if it follows the old adage: Practice what you preach.

At a time when the labor movement is especially vulnerable, unions need to avoid any grounds that could cost them public support—especially in a campaign as promising and crucial as the Fight for $15.

[David Moberg, a senior editor of In These Times, has been on the staff of the magazine since it began publishing in 1976. Before joining In These Times, he completed his work for a Ph.D. in anthropology at the University of Chicago and worked for Newsweek. He has received fellowships from the John D. and Catherine T. MacArthur Foundation and the Nation Institute for research on the new global economy. He can be reached at davidmoberg@inthesetimes.com. ]