Does Henry Kissinger Have a Conscience?

Last week, the first tranche of those declassified documents was released. The documents revealed that White House and U.S. State Department officials were intimately aware of the Argentine military’s bloody nature, and that some were horrified by what they knew. Others, most notably Henry Kissinger, were not. 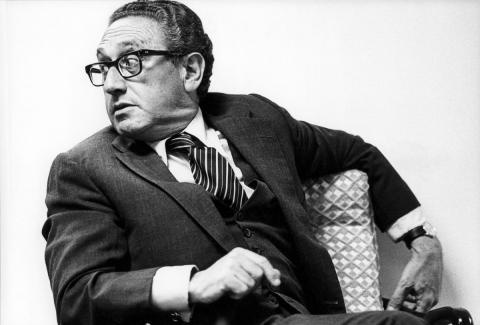 Last March, when President Obama travelled to Argentina to meet with the country’s new President, Mauricio Macri, his public appearances were dogged by protesters who noisily demanded explanations, and apologies, for U.S. policies, past and present. There are few countries in the West where anti-Americanism is as vociferously expressed as in Argentina, where a highly politicized culture of grievance has evolved in which many of the country’s problems are blamed on the United States. On the left, especially, there is lingering resentment over the support extended by the U.S. government to Argentina’s right-wing military, which seized power in March of 1976 and launched a “Dirty War” against leftists that took thousands of lives over the following seven years.

Obama’s visit coincided with the fortieth anniversary of the coup. He pointedly paid homage to the Dirty War’s victims by visiting a shrine built in their honor on the outskirts of Buenos Aires. In an address he gave at the shrine, Obama acknowledged what he characterized as American sins of omission, but he stopped short of issuing an outright apology. “Democracies have to have the courage to acknowledge when we don’t live up to the ideals that we stand for,” he said. “And we’ve been slow to speak out for human rights, and that was the case here.”

In the run-up to Obama’s trip, Susan Rice, the President’s national-security adviser, had announced the Administration’s intention to declassify thousands of U.S. military and intelligence documents pertaining to that tumultuous period in Argentina. It was a good-will gesture aimed at signalling Obama’s ongoing effort to change the dynamic of U.S. relations with Latin America—“to bury the last remnant of the Cold War,” as he said in Havana, during that same trip.

Last week, the first tranche of those declassified documents was released. The documents revealed that White House and U.S. State Department officials were intimately aware of the Argentine military’s bloody nature, and that some were horrified by what they knew. Others, most notably Henry Kissinger, were not. In a 1978 cable, the U.S. Ambassador, Raúl Castro, wrote about a visit by Kissinger to Buenos Aires, where he was a guest of the dictator, Jorge Rafael Videla, while the country hosted the World Cup. “My only concern is that Kissinger’s repeated high praise for Argentina’s action in wiping out terrorism may have gone to some considerable extent to his hosts’ heads,” Castro wrote. The Ambassador went on to write, fretfully, “There is some danger that Argentines may use Kissinger’s laudatory statements as justification for hardening their human rights stance.”

The latest revelations compound a portrait of Kissinger as the ruthless cheerleader, if not the active co-conspirator, of Latin American military regimes engaged in war crimes. In evidence that emerged from previous declassifications of documents during the Clinton Administration, Kissinger was shown not only to have been aware of what the military was doing but to have actively encouraged it. Two days after the Argentine coup, Kissinger was briefed by his Assistant Secretary of State for Inter-American Affairs, William Rogers, who warned him, “I think also we’ve got to expect a fair amount of repression, probably a good deal of blood, in Argentina before too long. I think they’re going to have to come down very hard not only on the terrorists but on the dissidents of trade unions and their parties.” Kissinger replied, “Whatever chance they have, they will need a little encouragement . . . because I do want to encourage them. I don’t want to give the sense that they’re harassed by the United States.”

Under Kissinger’s direction, they certainly were not harassed. Right after the coup, Kissinger sent his encouragement to the generals and reinforced that message by expediting a package of U.S. security assistance. In a meeting with the Argentine foreign minister two months later, Kissinger advised him winkingly, according to a memo written about the conversation, “We are aware you are in a difficult period. It is a curious time, when political, criminal, and terrorist activities tend to merge without any clear separation. We understand you must establish authority. . . . If there are things that have to be done, you should do them quickly.”

Argentina’s military forces had launched their coup in order to expand and institutionalize a war that was already under way against leftist guerrillas and their sympathizers. They called their campaign the Process of National Reorganization, or, simply, “el proceso.” During the Dirty War, as it became known, as many as thirty thousand people were secretly abducted, tortured, and executed by the security forces. Hundreds of suspects were buried in anonymous mass graves, while thousands more were stripped naked, drugged, loaded onto military aircraft, and hurled into the sea from the air while they were still alive. The term “los desaparecidos”—“the disappeared”—became one of Argentina’s contributions to the global lexicon.

At the time of the coup, Gerald Ford was the caretaker U.S. President, and Henry Kissinger was serving as both Secretary of State and national-security adviser, as he had done under Nixon. Immediately after the Argentine coup, on Kissinger’s recommendations, the U.S. Congress approved a request for fifty million dollars in security assistance to the junta; this was topped off by another thirty million before the end of the year. Military-training programs and aircraft sales worth hundreds of millions of dollars were also approved. In 1978, a year into Jimmy Carter’s Presidency, mounting concerns about human-rights violations brought an end to U.S. aid. Thereafter, the new Administration sought to cut the junta off from international financial assistance. In early 1981, with Reagan coming into the White House, however, the restrictions were lifted.

There have, in fact, been no legal consequences whatsoever to Kissinger for his actions in Chile, where three thousand people were murdered by Pinochet’s thugs, or for those in Vietnam and Cambodia, where he ordered large-scale aerial bombardments that cost the lives of countless civilians. One of his foremost critics was the late Christopher Hitchens, who in 2001 wrote a book-length indictment entitled “The Trial of Henry Kissinger.” Hitchens called for Kissinger’s prosecution “for war crimes, for crimes against humanity, and for offenses against common or customary or international law, including conspiracy to commit murder, kidnap, and torture.”

While Argentina’s Dirty War was taking place, of course, its generals habitually denied that anything untoward was occurring. Questioned about los desaparecidos, the coup leader, General Videla, explained with chilling vagueness, “The disappeared are just that: disappeared. They are neither alive nor dead. They are disappeared.” Other officers suggested that missing people were probably in hiding, carrying out terrorist actions against the fatherland. In fact, the vast majority were being brutalized in secret prisons by government-salaried employees, and then, more often than not, executed. As happened in Germany during the Holocaust, most Argentines understood what was really going on, but kept silent out of a spirit of complicity, or fear. A see-no-evil national refrain was adopted by those Argentines who witnessed neighbors being dragged from their homes by plainclothes men, never to return: “Algo habrán hecho”—“they must have done something.”

We have repeatedly reviewed evidence of Kissinger’s callousness. Some of it is as inexplicable as it is shocking. There is a macho swagger in some of Kissinger’s remarks. It could, perhaps, be explained away if he had never wielded power, like—thus far—the gratuitously offensive Presidential candidate Donald Trump. And one has an awareness that Kissinger, the longest-lasting and most iconic pariah figure in modern American history, is but one of a line of men held in fear and contempt for the immorality of their services rendered and yet protected by the political establishment in recognition of those same services. William Tecumseh Sherman, Curtis LeMay, Robert McNamara, and, more recently, Donald Rumsfeld all come to mind.

In Errol Morris’s remarkable 2003 documentary “The Fog of War,” we saw that McNamara, who was an octogenarian at the time, was a tormented man who was attempting to come to terms, unsuccessfully, with the immense moral burden of his actions as the U.S. defense secretary during Vietnam. McNamara had recently written a memoir in which he attempted to grapple with his legacy. Around that time, a journalist named Stephen Talbot interviewed McNamara, and then also secured an interview with Kissinger. As he later wrote about his initial meeting with Kissinger, “I told him I had just interviewed Robert McNamara in Washington. That got his attention. He stopped badgering me, and then he did an extraordinary thing. He began to cry. But no, not real tears. Before my eyes, Henry Kissinger was acting. ‘Boohoo, boohoo,’ Kissinger said, pretending to cry and rub his eyes. ‘He’s still beating his breast, right? Still feeling guilty.’ He spoke in a mocking, singsong voice and patted his heart for emphasis.”

McNamara died in 2009, at the same age Kissinger is today—ninety-three—but his belated public struggle with his conscience helped leaven his clouded reputation. Now that he is nearing the end of his life, Kissinger must wonder what his own legacy is to be. He can rest assured that, at the very least, his steadfast support for the American superpower project, no matter what the cost in lives, will be a major part of that legacy. Unlike McNamara, however, whose attempt to find a moral reckoning Kissinger held in such scorn, Kissinger has shown little in the way of a conscience. And because of that, it seems highly likely, history will not easily absolve him.

Jon Lee Anderson, a staff writer, began contributing to The New Yorker in 1998.