52 Years Ago, This Speech Changed the Course of Black Voting Rights in America

Fannie Lou Hamer was 'sick and tired of being sick and tired,' and she told the 1964 Democratic National Convention 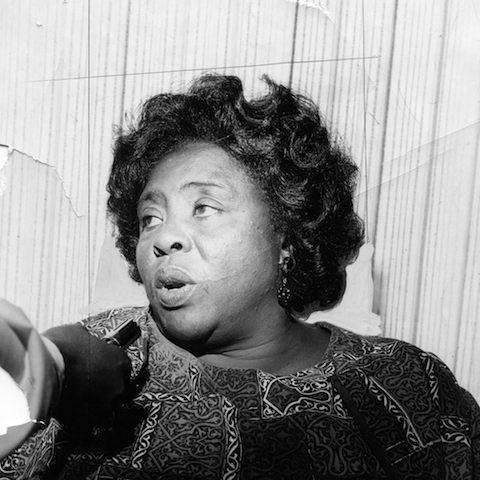 Fifty-two years ago, on August 22, 1964, Fannie Lou Hamer delivered arguably the most significant speech of her political career. The fiery civil rights activist known for her iconic line, “I’m sick and tired of being sick and tired,” spoke before a televised audience at the 1964 Democratic National Convention (DNC), held in Atlantic City, New Jersey.

She had traveled all the way from Mississippi on behalf of the Mississippi Freedom Democratic Party (MFDP)  — an organization that was established in April 1964 to challenge the all-white Mississippi delegation to the DNC. Her televised speech, delivered before millions, addressed two central issues that remain relevant in contemporary black political discourse: voter suppression and state-sanctioned violence.

Born in 1917 in Montgomery County, Mississippi, Hamer was the granddaughter of slaves and worked as a sharecropper for much of her life. In 1962, activists in the Student Nonviolent Coordinating Committee (SNCC) held a voter registration in Hamer’s hometown of Ruleville, Mississippi. She was surprised to learn that black people had been granted voting rights according to the US Constitution — a fact that white supremacists worked hard to shield from black Mississippians. When SNCC members asked for volunteers to register to vote, Famer jumped at the opportunity. “The only thing they could do to me was to kill me,” she later remarked, “and it seemed like they’d been trying to do that a little bit at a time ever since I could remember.”

In 1964, Hamer joined a group of 64 delegates to the DNC to petition the convention’s credentials committee for four seats on the convention floor. In her memorable speech, Hamer described the scare tactics and violence she and other African Americans experienced in Mississippi and their lack of access to the Democratic Party.

First, she addressed the issue of black voting rights. She told the story of how when she went down to the courthouse in Indianola, Mississippi to register to vote in 1962, she was confronted by one roadblock after another. When she finally succeeded, she returned home, where the owner of the plantation on which she worked as a sharecropper, gave her an ultimatum: “If you don’t go down and withdraw your registration, you will have to leave.” And leave she did.

In her 1964 speech before the DNC, Hamer went on to describe the persistent acts of racial violence black men and women faced on a daily basis in the Jim Crow South. She told the stories of shots being fired at the homes of those who supported her stance on voting. And then she told the story of her own experiences with state-sanctioned violence.

In 1963, she and a group of other activists got off a bus in Winona, Mississippi to grab a bite to eat. They had been traveling back home after attending a voter’s workshop in Charleston, South Carolina. To their dismay, but not their surprise, Hamer and her colleagues encountered resistance from the owners of the restaurant who made it clear that blacks were not welcome. Hamer returned to the bus but then decided to re-emerge when she noticed police officers shoving her friends into police cars. When a white officer grabbed her and started kicking her, fear rose within her — she knew full well that this encounter would not end well.

Later at the police station, officers, aided by prisoners, unleashed a brutal beating on Hamer. The beating would have a permanent impact on Hamer’s physical health. As she later explained, “They beat me till my body was hard, till I couldn’t bend my fingers or get up when they told me to. That’s how I got this blood clot in my left eye — the sight’s nearly gone now. And my kidney was injured from the blows they gave me in the back.”

By recounting this painful story at the 1964 DNC, Hamer sought to shed light on the challenges black men and women in Mississippi faced in their struggles for citizenship rights. Similar to many other black women activists of the Civil Rights-Black Power era, including Rosa Parks and Joan Little, Hamer understood the power of public testimony in the fight for the rights and dignity of black people.

The 1964 DNC speech was certainly an opportunity for Hamer to demand the inclusion of black delegates in the Party. But, even more, it was an opportunity to empower black men and women and to send the message that silence in the face of degradation and violence was simply not an option. This was a powerful message — so powerful in fact that President Lyndon Johnson intentionally interrupted Hamer’s testimony to give an impromptu press conference. The entire speech later aired on the evening news.

Fifty-two years later, black men and women across the nation continue to face many of the same challenges Hamer described. Despite the political gains of the Civil Rights Movement — most notably, the passage of the Voting Rights Act and Civil Rights Act — racism and discrimination persist in all aspects of American society. North Carolina’s voting laws  — which were recently struck down — mirror many of the earlier efforts to discriminate against black men and women and thereby limit their right to vote. Moreover, the systemic problem of police violence and brutality in black communities across the nation mirror the pervasive acts of lynchings of the Jim Crow era. Today, black Americans die at the hands of police at a rate that is almost equivalent to the number of documented lynchings during the early 20th century.

As she reflected on her own painful experiences and the experiences of other black men and women, Fannie Lou Hamer could not help but to “question America.” “Is this America,” she asked as tears welled up in her eyes, “the land of the free and the home of the brave, where we have to sleep with our telephones off of the hooks because our lives be threatened daily, because we want to live as decent human beings, in America?” These crucial words, delivered by a passionate civil rights activist at the 1964 Democratic National Convention, shook the nation to its core — as they should now.

Keisha N. Blain, Ph.D. is assistant professor of History at the University of Iowa and co-editor of Charleston Syllabus: Readings on Race, Racism, and Racial Violence (University of Georgia Press, 2016). She is one of the co-developers of #Charlestonsyllabus, a crowdsourced reading list on Twitter relating to the history of racial violence. Blain’s research has been featured on CSPAN and her writing has appeared in The Huffington Post, The Feminist Wire, and Public Books. Follow her on Twitter @KeishaBlain.