The Heavy and Unsustainable Price of Chile's Privatized Water

Promoted by the World Bank and the International Monetary Fund, the Chilean model for the commodification of water has changed the way water is valued and managed globally. But with water availability to Chile’s capital predicted to fall 40% by 2070, Chileans are demanding the government prioritize human and ecological needs over profit and scrap the neoliberal scheme that began with the privatization of the nation’s water under the Pinochet dictatorship. 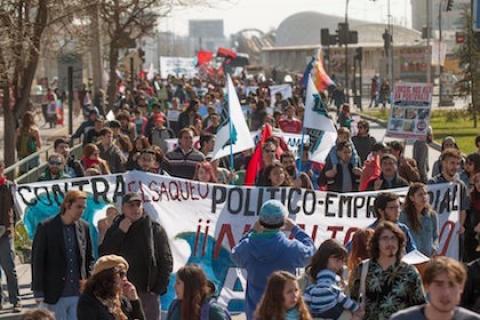 When it comes to water, Chile is failing its citizens. In Santiago, the nation’s capital, millions of people are regularly left without running water for days at a time and experts are warning of water scarcity to come across the country as temperatures rise and glaciers retreat.

“What we need is a transformation away from the private model of water ownership and to recognise water as a human right,” says Francisca Fernández, spokeswoman for the Movimiento por la Recuperación del Agua y la Vida (Movement for the Recovery of Water and Life), which campaigns for public ownership of water. The organisation emerged four years ago at a time of mounting climatic stress in Santiago.

A recent protest saw at least 2,000 people take to the capital’s streets to demand the repeal of laws that privatised Chile’s water supply. At the heart of the protest and others like it in recent years lies frustration that the privatisation of water has kept prices unnecessarily high, delivered poor service and done little to address concerns over insufficient supply in the future.

With water availability to Santiago predicted to fall 40% by 2070, residents are right to be concerned about the future of their water. For Fernández, while climate change poses a serious threat to the city’s water supplies, she believes the issue is principally political: “The root of the problem lies in the commodification of the nation’s water under [Pinochet’s] dictatorship,” she said.

The process of water privatisation in Chile which began in 1981 under General Pinochet established a model for water management that strengthened private water rights, adopted a market-based allocation system and reduced state oversight. That model became emblematic of neoliberal reforms heavily promoted by the World Bank and International Monetary Fund.

These reforms fundamentally changed the way water is valued and managed globally. No longer a mere necessity for human survival, water has become an object of international financial speculation and experts predict that “blue gold” will soon become the most important physical commodity worldwide, dwarfing oil and precious metals.

Pinochet’s political demise in 1990 was not the end of Chile’s faith in a privatised water supply. If anything, that faith deepened following the return to democracy, with legislation in 1998 clearing the way for international firms to buy up the nation’s water utilities.

Aguas Andinas, for example, a subsidiary of transnationals Agbar and Suez, monopolises Santiago’s market today, selling water to 6 million of the city’s 7.2 million residents at one of the highest tariffs in Latin America.

Jonathan Barton, principal researcher at the Center for Sustainable Urban Development at the Pontifical Catholic University in Santiago, says there have been various attempts to deal with Chile’s water issues over the past 15 years, but he doesn’t believe they have had any influence. A government body – the Water Directorate – is meant to be in charge of water planning, but Barton says it has no control over water, “beyond basically giving it away to private owners”.

But there are signs of a government change of heart, perhaps spurred by public sentiment: a new poll suggests that 74% of Chileans support a return to the public ownership of water. The Chilean government’s special committee on water resources recently proposed reforms to national water laws. Those proposals, now under discussion in congress, would prioritise human consumption over commercial use and grant the Water Directorate new oversight powers.

The private sector is resisting reform, however. The Confederation of Production and Commerce, representing the Chilean private sector, made its opposition clear in a statement (pdf) last month. By declaring water a “public good”, it said, the proposed reforms had “a clear intent on expropriating [private] water rights”.

If private interests are frustrating solutions to Santiago’s water crisis, the city is far from alone. In a study that began at MIT and looked at cities across the world, we found growing signs that private influence over services such as water is leaving poor communities more vulnerable to climate change.

Despite resistance from the business community, experts warn that Chile’s neoliberal water model cannot be sustained. Barton says climate change requires “radical change” if future water crises are to be avoided and he doesn’t believe that change will happen within the current privatised water system.

Chile’s legislators should begin by listening to the demands from the streets. It makes sense to prioritise human and ecological needs over profits. It also makes sense to have a serious conversation about reforms to water ownership and oversight in the search for a durable solution to the country’s water troubles.

[Daniel Gallagher is a PhD student in the Department of Urban Studies and Planning, Massachusetts Institute of Technology.]