film I Am Not Your Negro

Raoul Peck's new film 'I Am Not Your Negro' about James Baldwin has a powerful structure utilizing rare videos and photos and personal writings of Baldwin, and at the same time aligning them with contemporary issues of police brutality and race relations, creates a mesmerizing awareness of the continuity in the struggle for civil rights. 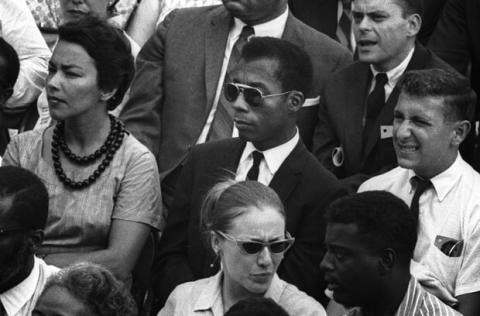 One of the most artistic and daring political statements at this years Toronto International Film Festival, was the world premiere of Haitian-born Raoul Peck’s I Am Not Your Negro, based on James Baldwin’s unfinished book Remember This House.  Not surprisingly the film won the People’s Choice Documentary Award for its “radical narration about race in America today.” Peck is from Haiti and has created one of the most progressive filmographies in cinema history. He actually received privileged access to the Baldwin archives because the family knew of his outstanding works on the Conga leader, Patrice Lumumba, specifically the 1990 political thriller Lumumba: Death of a Prophet and the 2000 award winning drama on the same subject, Lumumba. They trusted in his ability to accurately represent Baldwin’s life and writings, and so he took 10 years to bring this masterpiece to the screen, after being rejected by every American studio he approached. And public agencies said “this is public money so you have to present bothsides!” Thus, his ability to produce this film through his own successful company and a supportive French TV station ARTE, allowed him to make a film exactly like he wanted, with no censorship, and no one telling him to rush the film or mellow the message.

Peck “didn’t want to use the traditional civil rights archives.” He chose to avoid the talking heads format and picked Samuel L. Jackson to embody the spirit of Baldwin in the potent narration. The film’s powerful structure utilizing rare videos and photos and personal writings of Baldwin, and at the same time aligning them with contemporary issues of police brutality and race relations, creates a mesmerizing awareness of the continuity in the struggle for civil rights.

Baldwin made a deep impact on the young impressionable Haitian filmmaker. Peck remembers back in the 60s when mostly white Americans were honored in pictures on walls, and that “it was Baldwin who first helped me see through this myth of American heroes.” He felt that Baldwin had been forgotten or overlooked, while James Meredith, Medgar Evers, the Black Panthers, Huey Newton, Malcolm X and other Black leaders were either killed off, imprisoned, exiled or bought out. There were rare exceptions on commercial TV,  once where Baldwin talked on the Dick Cavett Show for an hour uncensored.

Baldwin, although a literary giant and a close friend to many leading activists, rarely appeared at events and mass rallies, and declined membership in parties or groups such as the NAACP, Panthers, SNCC, etc.  And although he was homosexual, rarely focused on the issue of gay rights, which would have been even more isolating in those decades. Rightfully, this film brings to life Baldwin’s poetry and passion for justice, and regains his importance in the field where art intersects activism.

While addressing the enthusiastic audience in the Q&A, director Peck mentioned, “I hope this film will help rephrase what is called the race conversation, which deep down is a class conversation.” Although class wasn’t developed as much as race in this film, not coincidentally, Peck is now in post-production on a drama about young Karl Marx(!) –  a major historical figure who has rarely if never been a subject in America cinema. And all of Peck’s previous films are imbued with a deep sense of awareness in the class struggle.

The director was a special guest at a TIFF Talk entitled Race and History where he covered many of the points mentioned here about taking control of your own artistic project. He defended the idea that an artist has a point of view and shouldn’t be forced to compromise his political message, whether it’s acceptable or not. Near the end of the conversation I was able to ask him a question about how difficult it is to market films on race and class. He responded by saying “I come from a generation that was more political and where the film content was more important… I tried to keep the content but provide a great movie… All my films are political but I make sure I tell a story, that it’s art and poetry and that the audience will enjoy it.” He confesses that he’s privileged having his own company and that his films don’t always have to make money. “It’s about financing your movie, not making a profit. . . It’s difficult to have those two sides in your head, because you know that having to make a profit means you often have to compromise…Once I have people trust me with their money, I am obliged to give them a great film — I’m not obliged to give them profit.”

And he gave us a great film! I Am Not Your Negro was recently purchased by Magnolia Pictures for North American distribution, where they praised Peck for crafting a “profound and indelible statement that couldn’t be more timely or powerful.” And let us all anxiously await his new biopic on Karl Marx!

[Bill Meyer is a musician, writer and producer of progressive multimedia events. He travels worldwide performing jazz with several groups. A longtime political activist and aficionado of progressive cinema, Meyer usually writes on the culture pages of the People's World and other journals, and primarily reports on film festivals.]