The analysis shows the wealthiest top 1 percent of taxpayers’ share of the tax cut would be 44 percent. Apparently Donald Trump just can't get enough tax breaks. 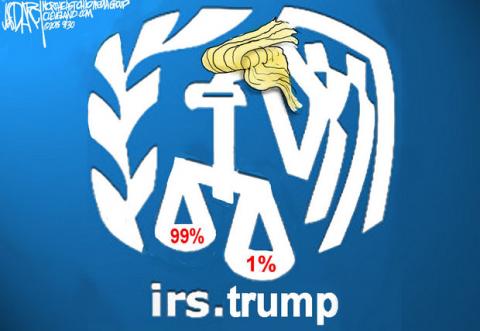 A new Citizens for Tax Justice (CTJ) analysis of the revised tax plan proposed by presidential candidate Donald Trump in September finds that the plan would reduce federal revenues by at least $4.8 trillion over the next decade while cutting taxes for all income groups. The analysis also shows the wealthiest top 1 percent of taxpayers’ share of the tax cut would be 44 percent.

Trump’s revised tax proposal would reduce federal revenues by $4.8 trillion over the next decade. Of that, $2.1 trillion would be due to personal income tax and payroll tax cuts; $2.4 trillion would be due to corporate tax cuts, and another $0.3 trillion in revenue loss would be due to repeal of the federal estate tax. It is important to note that this revenue estimate does not factor in the effect of reducing the personal income tax rate on “pass-through” income to 15 percent, a provision that Trump has irregularly indicated would be part of his plan. Adding a 15 percent pass-through rate would add as much as $1.6 trillion to the ten-year cost of the plan, bringing its total cost to $6.4 trillion. 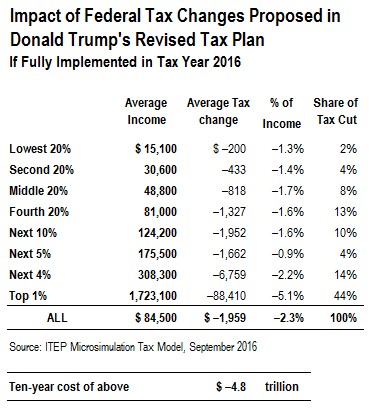 The revised Trump plan would cut taxes overall for each income group. The largest tax cuts, as a share of personal income, would go to those in the top 1 percent of the income distribution. This group, with incomes averaging $1.7 million in 2016, would receive tax cuts averaging 5.1 percent of their income or $88,000.

However, not all families within each income group would receive tax cuts. Some middle- and low-income families’ taxes would go up under Trump’s plan because the bottom income tax rate would increase from 10 to 12 percent under the plan, or because their taxable income might increase.

Those potentially seeing tax hikes include:

Childless Couples Who Itemize. Trump’s proposal would repeal personal and dependent exemptions and replace them with an expanded standard deduction and generous new deductions for dependents. Since childless couples with large itemized deductions would benefit from neither of these tax breaks, the loss of personal exemptions could result in substantial tax increases that are not offset by reductions in tax rates.

Heads of household. Unmarried taxpayers with dependents, including single parents, can currently claim “head of household” status for tax purposes, which gives them larger exemptions and deductions and broader tax brackets than those available to other single taxpayers. Trump’s plan would eliminate this status. Taken on its own, this change would increase taxes for many heads of household. For example, under current law single parents pay at the 25 percent marginal tax rate on taxable income exceeding $50,400. The Trump plan would apply the 25 percent tax rate to single parents’ taxable income exceeding $37,500.

Families with Children Over the Age of 13. Trump proposes to replace personal exemptions, which are given on a per-family member basis, with a larger standard deduction—which does not increase with family size. While Trump’s proposed new dependent care tax breaks will help offset this tax hike for many families, the new breaks are available only for children under the age of 14. This means families with older children are more likely to see a tax hike under this plan.

Itemizers. One of the revenue raisers in Trump’s plan is a provision capping the total value of itemized deductions at $200,000 for married filers ($100,000 for all others). For some upper-income families, this provision will reduce their deductions and make more of their income subject to tax. For middle- and lower-income families who itemize, the expansion of the standard deduction will offer less, and sometimes no, benefit, increasing the likelihood that these families will see tax increases overall.

On the personal income tax side, Trump proposes to:

Trump would also repeal the federal estate tax, but would disallow stepped up basis for estates valued at more than $10 million. This analysis excludes the impact of the stepped up basis provision due to insufficient data. 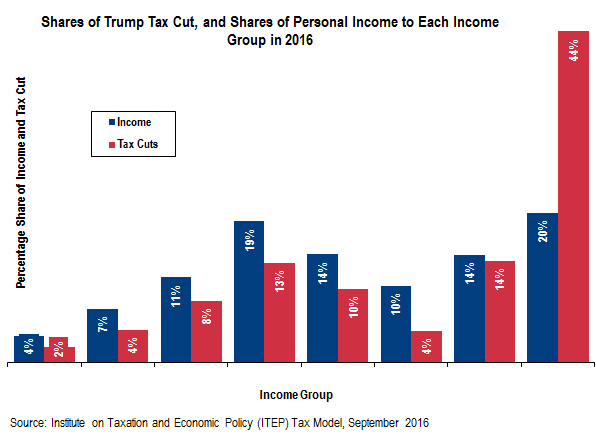 This analysis excludes some components of the Trump plan, either because these components have not been fully specified or because data limitations prevent analysis. Most notably, the analysis excludes the rate reduction for “pass through” business income that Trump previously announced because the candidate has provided incomplete and conflicting details on how this tax cut would be structured. The analysis also excludes the proposed deduction for elder care due to data limitations, and excludes the plan’s savings incentives because of difficulties in forecasting taxpayers’ response to these incentives.

One of the most important new tax provisions under Trump’s plan is a deduction and credit associated with dependent care. While the deduction is nominally based on a capped amount of actual expenses on dependent care, the campaign’s web site says the tax break “would be provided to families who use stay-at-home parents or grandparents.” Because this means stay-at-home parents could claim the maximum deduction available in each state, we assume all parents of eligible children would claim the maximum deduction, rather than simply deducting their actual dependent care expenses. This assumption increases the projected tax cuts for families with eligible children, and also increases the projected 10-year cost of the plan. The analysis also assumes taxpayers will be allowed to choose whether to claim the proposed deduction or credit or continue to use the dependent care credit that currently exists.