Of Latino voters, Mexican and Mexican American voters are particularly strident in opposition to Trump because this campaign has targeted them and members of their families and has fostered the growth of right-wing and militia groups, particularly in border states. This kind of populist right-wing white nationalism is what passed California Proposition 187 in 1994, Arizona bill 1070 in 2010, and similar anti-immigrant legislation around the nation. 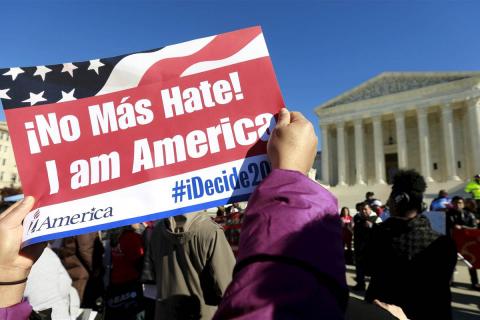 Immigration issues along with the changing composition of the U.S. electorate will shape the 2016 Presidential and Congressional races, as well as many state races.

While working class non-union white voters in the upper Midwest appear to be abandoning the Clinton-led Democratic Party in response to immigration and neo- liberal trade policies, Latino voters are putting some traditional Republican and swing states in play, noticeably Arizona, Nevada, Colorado and Texas.  In these states with a close electoral contest, the Latino vote may make the decisive victory.

The U.S. electorate in 2016 will be the country’s most racially and ethnically diverse ever. Nearly one in three eligible voters  (31%) will be Latino, African American, Asian or another racial or ethnic minority, up from 29% in 2012.  Much of this change is due to strong growth among Latino voters, in particular U.S.-born youth. Latinos will constitute an estimated 11.9% of the total electorate.

According to Pew Research, the projected number of eligible voters will be:

White – 69%; African American  12%; Latino 12%; Asian 4%.  (For a detailed description of the various national  groups within the Hispanic category  see  here)

Latino millennials will account for nearly half (44%) of the record 27.3 million Hispanic eligible voters projected for 2016. (Pew, 2016) 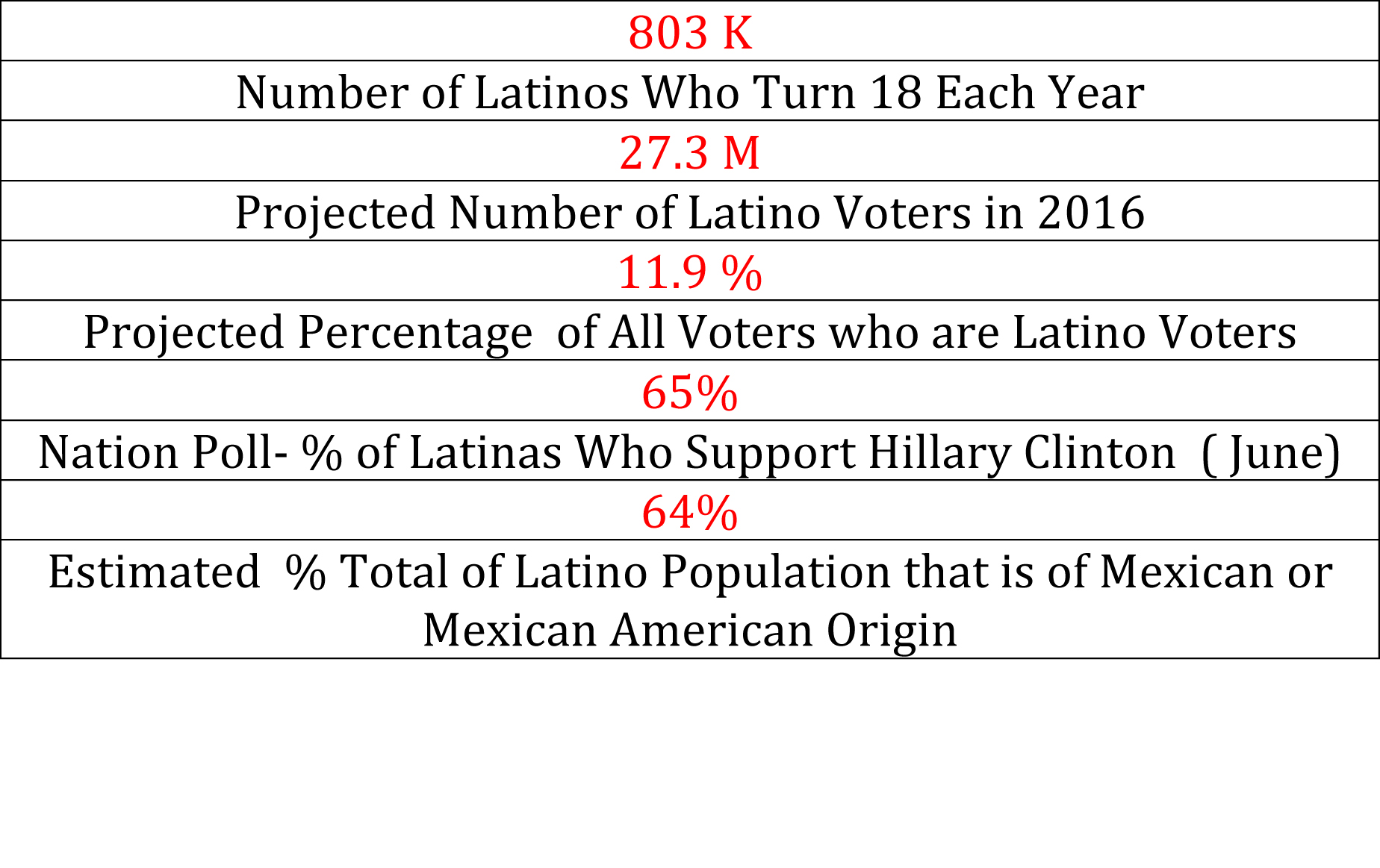 Donald Trump began his campaign for the Republican nomination with an assault on Mexicans and Mexican Americans in the U.S. This was his strategic choice.  He has expanded his assault to encompass additional immigrant groups including Muslims and other Latino immigrants (but not Cubans).

Trump has a cynical and conspiratorial view of immigration: calling for building  walls, breaking up families,  and deporting  people.  This fear-mongering political message has found a very receptive base within our society among some alt-right nationalist and angry conservative older voters.

Trump’s “immigration proposal “ is as deceptive, poorly constructed and poorly informed as his proposals on the military and seizing oil from Isis. He proposes that most of the 11 million immigrants already here without documents be deported to their home country and required to apply for readmission, without changing the visas laws.  He calls this a humane approach.

Best estimates are that this would require at least 6.5 million people to be deported, of which at least 3,900,000 (estimate 60%) would be from Mexico.  Of those deportable, some 40% live in families with U.S. citizen children (which would make them promptly admissible if they were from most nations on earth).

U.S. law limits the total number of immigration visas per year to 675,000 with a limit that no more than 7% can be from any one country.   Of the total, only 226,000 are eligible for immigration on the basis of family unification.  So, best estimate, if Trump deports 6.5 million people, and they apply for readmission under current law, it will take more than 100 years for most of them to be eligible for readmission.

In 2015, there were 1,344, 429 people who already had filed visa applications from Mexico.  It would take 84 years to clear the present backlog before anyone deported by Trump could receive an immigrant visa.  This long waiting list is one of the basic reasons why so many migrants come to the US from Mexico, the Philippines, and India, among others, without legal visas.

As you can see, Trump’s proposal is a campaign talking point developed to please his nativist base, not a realistic plan.  Trump’s anti-Mexican, anti-immigrant campaign is dangerous.  It mobilizes right-wing  anti-immigrant forces. Trump’s campaign is not just racism – it is a strategy to magnify racism to win the election .

The Trump campaign provides an example of strategic racism, which is a system of racial oppression created and enforced because it benefits the over-class, in this case the many billionaire funders of the Republican Party.   These groups foster and promote interracial conflict and job competition as a strategy to gain white votes and to keep wages and benefits low.  White nationalists support this campaign to promote their continuing white supremacy.

Of the Latino voters, Mexican and Mexican American voters are particularly strident in opposition to Trump because this campaign has targeted them and members of their families and has fostered the growth of right-wing and militia groups, particularly in border states.  The organization and mobilization of an anti-immigrant right wing will  continue to grow.

The Trump campaign has already fostered the growth of naked racism, xenophobia, and authoritarianism.  This kind of populist right-wing white nationalism at the ballot box is what passed California Proposition 187 in 1994 , Arizona bill 1070 in 2010, and similar anti-immigrant legislation in states  around the nation.

Historically, anti-immigrant campaigns led to the Chinese Exclusion Act, the incarceration of the Japanese during WW II, deportation of over one million Mexicans (including U.S. Citizens) during the Great Depression , and the deportation of over one million Mexican workers in 1952.  A surge of right-wing voters this year  will further  doom efforts for humane  immigration reform for at least a decade.

American Prospect editor and DSA Vice Chair Harold Meyerson points to a Sept. Washington Post poll of the 50 states to note that while Clinton is weak in several industrial heartland states (Michigan, Wisconsin, Ohio) she is surprisingly strong in and challenging in normally red states including Arizona and perhaps even Texas.  He notes that Texas and California have essentially the same share of Latino residents (38.5 % each), but Texas has long been an anchor of  the GOP’s electoral bloc and  recently a source of anti-immigrant campaigns.  Notably, both states have a predominantly Mexican American population as a numerical base of their Latino votes.

California has voted strongly Democratic since the 1994 assault on Mexican immigrants by the Republicans under then-Governor Pete Wilson.  In the state  election of Nov. 1994  Governor Pete Wilson won re-election  during a recession with over 56% of the vote.  His campaign was based in large part on promoting  a mean-spirited, divisive, and racist campaign, with virulent ads for Proposition 187,  directed against Mexican and Mexican Americans. The Prop. 187 campaign created a state law to prohibit undocumented immigrants from receiving public benefits such as health care, public education, and food assistance.  It was passed decisively by the then-majority of white voters.   California Prop. 187 was later ruled unconstitutional by the federal courts, since immigration law is a federal matter not a state arena and the exclusion of children from schools in 187 violated a prior Supreme Court decision (from Texas) of Plyler v. Doe.  While the California state law was suspended, most of the elements of the law – except the public school requirements – became federal law and policy in the  1996 federal immigration reform and welfare reform legislation.

In response to their defeat, Latinos in the state coalesced as a voting force after the passage of Prop. 187.   Working with major Latino-led labor unions, California Latinos have come to predominate in the state legislature and contribute to electing Democrats at all levels.

During this same period, Texas shifted sharply to the right,  elected more Republicans, and  gave  the nation the Bush dynasty.   Republicans in control of state government used well-funded campaigns,  redistricting and voter suppression  to gain near total control of the state and to impose austerity.   However, now, with the Trump assault on immigrants, the presidential race in Texas is surprisingly a near tie, according to the Washington Post poll.

Latino organizations in the nation argue that the example of Latino mobilization in California in response to passage of Prop. 187 can be reproduced in Mexican American voter mobilizations against Trump, perhaps changing the voting patterns of  Arizona, Texas,  and  Colorado.  It will definitely be more difficult to grow the Latino vote in anti-union states such as Texas and Arizona than it was in California.

While the number of Latinos eligible to vote has increased dramatically since 2000, the percentage of eligible voters who actually register and vote is low.

Further, according to Voto Latino in 2012, 41% of Latinos who were eligible to vote did not register. And, 18-29 year olds are the least likely to register and to vote.

For example, in Texas, which has the second-largest Hispanic population in the U.S. after California, 2.2 million Hispanics are registered to vote, while 2.6 million are eligible but not registered.

To be clear, Latino voters do not vote only on immigration issues.  They expect politicians to have progressive positions on a number of policy issues.   A paper by Latino Decisionsshows that, overall, their policy preferences are quite close to those of all voters: protection from terrorist attacks, immigration, climate change, equal pay, family leave, college affordability, and corporate tax reform.

Persons promoting voter registration need to recognize that the Puerto Rican and Cuban communities do not have an immigration issue, so the Trump Wall is less urgent, less offensive to them as a campaign issue than it is to Mexican Americans. For example, a September  poll by Univision shows that Clinton out-polls Trump among Latinos  by 68 % to 18% in Arizona, by 62 % to 17% in Colorado, by 65% to 19 % in Nevada, but  only by 53% to 29 % in Florida.

As of September 17, in Florida Trump leads Clinton among all likely voters by 47.4%  to 45.6% .  Clinton leads among Hispanics by 53% to  29% , but Trump has developed  an outreach effort among Cuban Americans (24%) and Venezuelans (0.05%) to reduce Clinton’s lead.  Mexicans and Mexican Americans make up only a small 7% of likely voters in the state.  With Trump’s support among Cubans and Venezuelans, and his strong lead among  non-Hispanic white voters, he may well win the state and its critical votes in the Electoral College in spite of the  Democratic vote of the growing Puerto Rican-born  community (20%).

The scandal started by Trump over Venezuelan born actress Alicia Machado, a Miss Universe for 1996, which developed Sept. 28-30,  along with the Newsweek article showing that Trump used his corporations to negotiate with the Castro government in violation of the embargo of Cuba during the 1990s has thrown the Hispanic vote in question in Florida.  If Trump loses Florida, he loses the election.

A number of Latino and Muslim organizations are already engaged in (often non-partisan)  voter outreach, including  the League of United Latin American Citizens, the Labor Committee for Latin American Advancement, the Southwest Voter Education Project,  the National Council de la Raza, and local  and labor organizations.  The group Voto Latino focuses its effort on online outreach, while Mi Familia Vota has targeted swing states with both media efforts and media outreach, particularly to the Spanish-speaking and bilingual audiences.  Media firms Univision and Fusion have developed  television and web-based voter outreach projects.

Dolores Delgado Campbell is a DSA member and professor emerita of women’s history and Mexican American history at American River College in Sacramento, California. She is a Chicana, and was the Co-Chair of DSA’s Latino Commission from 1982-2004.

Duane Campbell is a professor emerita of bilingual multicultural education at California State University Sacramento, a union activist, and past chair of Sacramento DSA. He is coordinating a Defeat Trump Latino outreach campaign in Sacramento. Materials are available for DSA chapters. Contact: campd22702@gmail.com