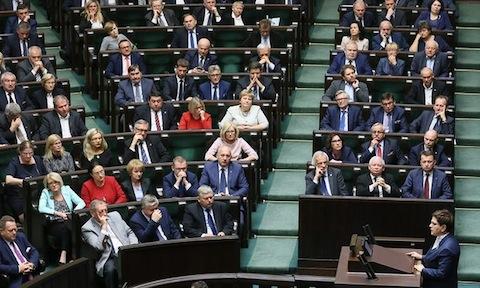 Poland’s parliament has overwhelmingly rejected plans for a near-total ban on abortion after mass protests by tens of thousands of women, marking an embarrassing setback for the conservative government and the powerful Catholic church.

The ruling Law and Justice party (PIS) had originally backed the draft proposals drawn up by an independent anti-abortion campaign group but was badly shaken by Monday’s protest rallies across Poland, attended by up to 100,000 women dressed in black.

Poland already has one of Europe’s most restrictive abortion laws but the new proposals would have limited it only to cases where the mother’s life was in direct danger – a step too far even for many women who helped vote PiS into power a year ago.

Under the rejected plan, women and doctors would have faced up to five years in jail for performing an abortion.

“PiS continues to back the protection of life,” Jaroslaw Kaczynski, the party leader and a devout Catholic, told parliament on Thursday. “And it will continue to take action in this respect, but it will be considered action.”

In the vote 352 lawmakers rejected the proposals against 58 in favour, but liberal opposition deputies warned of possible further attempts to tighten the law by the PiS government, which has a big parliamentary majority.

“We have to remain vigilant because we don’t know what the future holds for abortion rules in Poland. We can’t be sure that PiS won’t come up with a new proposal,” said Joanna Schmidt, a lawmaker with the new liberal Modern party.

Under current rules, enshrined in a 1993 law that ended the liberal approach of communist times, abortion is allowed in cases of rape, incest, danger to the mother’s health or when prenatal tests show serious, irreversible damage to the foetus.

But activists say women are sometimes denied an abortion in cases when a doctor invokes moral or religious objections.

Poland remains one of Europe’s most staunchly Catholic nations, although the clergy has seen its influence steadily eroded by more than two decades of democratisation and market reforms since the 1989 fall of communism.

Before Thursday’s vote, the bishops’ conference said: “We support all law proposals that call for the full protection of life from conception to natural death. But we do not support rules that would punish women who have an abortion.”

Explaining her party’s U-turn, the prime minister, Beata Szydlo, said the government would introduce fresh proposals by the end of the year but hinted that any new restrictions would be modest, if any.

She also announced more money to help families with disabled children.
Also on Thursday deputies withdrew draft legislation that would have severely restricted access to IVF procedures for infertile couples.

PiS managed to win last year’s election by broadening its appeal beyond its traditional base – mainly poorer, rural, less educated voters – to include more women and younger people attracted by its promises to introduce family benefits and increase other forms of public spending.

The PiS candidate for the presidency, Andrzej Duda, was also elected head of state last year on a similarly broad platform.

“PiS voters have included conservative people who previously voted for the centrists or those voting for the leftists who support the PiS welfare ideas,” said Zuzanna, a 35-year-old educator from Warsaw who voted for Duda.

“This proposal [on abortion] could have led to a decline in support among those whom they had attracted with welfare programmes,” she said.

PiS may have already suffered consequences. An opinion poll by Millward Brown conducted after Monday’s protests showed support for PiS easing to 30% from 33% in July, though it remains well ahead of its rivals.

Earlier this year its popularity barely budged when it tried to reform the constitutional court in moves critics – including the European Union – said undermined democratic standards.