One in 40 Americans can't vote because of a criminal conviction. But the rules aren't exactly fair 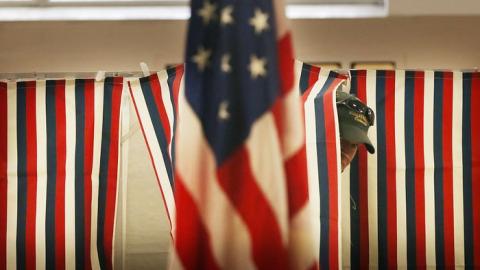 The United States is one of just four countries in the world that enforces post-release restrictions on voting., Spencer Platt/Getty

On July 7th in Staten Island a few months back, Ramsey Orta, the man who filmed the death of Eric Garner, sat in court conferring with his family. He was about to agree to plea deal on drug and weapons charges that would send him to prison for a while.

The term – four years – had already been settled. But some specifics were left up to him. In particular, he was given a choice as to which of his many drug charges he could swallow.

Ramsey looked around, paused to consider the randomness of the moment, then nodded finally.

He walked back to the front of the courtroom, and soon after formally pleaded guilty. The judge ordered him to be sentenced in the fall. That date came around this week.

This past Monday, Orta was formally sentenced in Staten Island Supreme Court. A convicted felon, he now becomes part of a community of about 6.1 million Americans who are not eligible to vote.

Some people might want to compare Orta's situation to that of Daniel Pantaleo, the police officer who killed Eric Garner. Pantaleo is not only still eligible to vote, he recently got a $20,000 pay raise while on desk duty in the NYPD. Some $13,000 of Pantaleo's $120,000 income last year was from "unspecified pay," which can include bonuses.

But to me the more damning comparison is with the executives of global banking giant HSBC. The bank four years ago entered into a $1.92 billion deferred prosecution agreement with our federal government.

Among its offenses was laundering $881 million for the Sinaloa and Norte del Valle drug cartels.

No executives were charged individually in that affair. So nobody lost voting rights for laundering hundreds of millions of dollars for the world's worst drug gangs.

Meanwhile, for selling a few bags of this or that, Ramsey Orta will not vote.

It's hard to overstate the absurdity of the divide between corporate offenders and everyone else, when it comes to the limits on democratic influence.

It isn't just that the executives from companies that are caught for serious offenses are almost never charged criminally, meaning that they seldom lose their voting rights.

What really rounds out the picture is that these same companies almost all become major campaign contributors.

But their executives all get to retain full voting rights. The companies will also keep their professional licenses. And election cycle after election cycle, they get to keep exerting enormous influence by donating millions of dollars to candidates.

Many of these companies are longstanding repeat offenders who've been censured by the government over and over again. Citigroup, for instance, which broke its own promise not to violate the same antifraud statute at least four times between 2000 and 2011, has donated over $37 million to candidates since 1990, and spent over $108 million on lobbying since 1998.

Pariah bank HSBC this year was also one of the top lobbying banks in Washington, spending over $1.8 million on such efforts. The bank's employees have donated more to Republicans than Democrats this year, but it should be noted that HSBC is also one of many banks to have hired Bill Clinton for a six-figure speech in the past.

Hell, Quicken Loans was being sued by the Justice Department for defrauding the Federal Housing Administration even as the Republican National Convention was being hosted in the Quicken Loans Arena in Cleveland.

Most of us can understand the rationale for not allowing murderers, rapists and pedophiles to vote, although not every country subscribes to that practice.

But the United States takes the practice political disenfranchisement to incredible levels. We are one of just four countries in the world (Croatia, Belgium and Armenia are the others) that enforces post-release restrictions on voting. Over three million Americans who've already served their time and are out of prison remain ineligible to vote.

In this country, whether or not you lose the right to vote for committing a crime mostly depends on who you are, not what you did, especially when it comes to nonviolent economic offenses.

If you got caught selling something bad in a plastic bag, you have a good chance of being forced to sit out this election.

If the bad thing you sold came with a prospectus, you're probably fine.

Just another reason to hate the political process as we head into this most disgusting of all presidential elections. The alien invasion can't come too soon.