Last week, hours after the disclosure of #TrumpTapes, and the gloating predatory and misogynist language Donald Trump used, New York Times best-selling author, survivor, and Twitter legend Kelly Oxford asked sexual assault survivors to share their stories. The result is nothing short of harrowing. Teen Vogue magazine shared some of the most immediate responses the next day. Today, there are even more allegations of Trump's sexual assualts and the defense by GOP leaders. 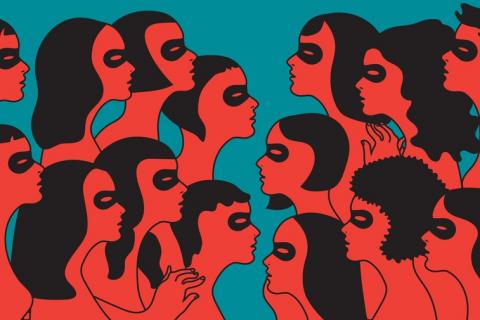 Lydia Ortiz // Teen Vogue,.
Women Share Rape Stories in Response to Donald Trump's Disgusting Comments
By Vera Papisova
October 8, 2016
Teen Vogue
It's only been a few hours since #TrumpTapes, and internet users are rightfully outraged by the predatory and misogynist language Donald Trump used in a recently discovered recording of a conversation that took place in 2005. In the recording, he bragged about sexually assaulting women. What may be even more disturbing than his comments are that some people continueto support him and even deny that rape culture exists. In response, New York Times best-selling author, survivor, and Twitter legend Kelly Oxford asked sexual assault survivors to share their stories. The result is nothing short of harrowing.

The truth is Donald Trump's inexcusable statements are the definition of rape culture, which is a very real thing that does exist. His remarks are not only offensive, but they add to Donald'slegacy of degrading girls and women. His consistent disregard for women actually enables violence against them by perpetuating — you guessed it — rape culture.

Kelly initially responded to the recording with a Tweet saying, "This is rape culture. This is what we hear and live." Predictably, this was met with salty reactions from people like this guywho not only claims that rape culture doesn't exist, but also asserts that "82% of women don't like feminists." Meanwhile, a recent poll shows that 72% of Americans actually believe that men and women should be social, political and economic equals (this is the definition of feminism.) 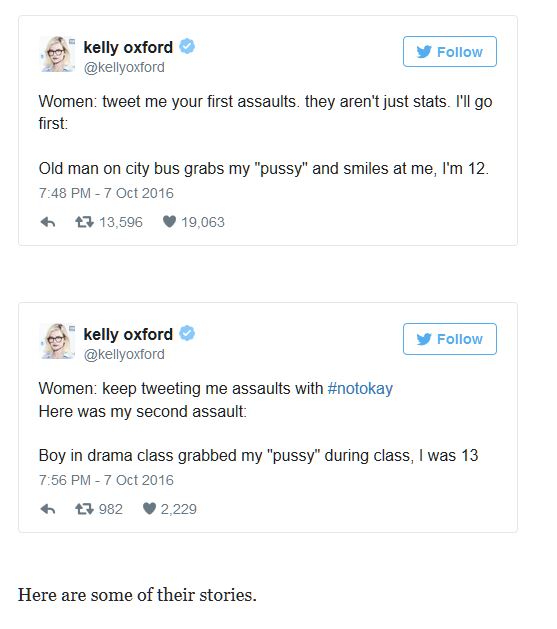 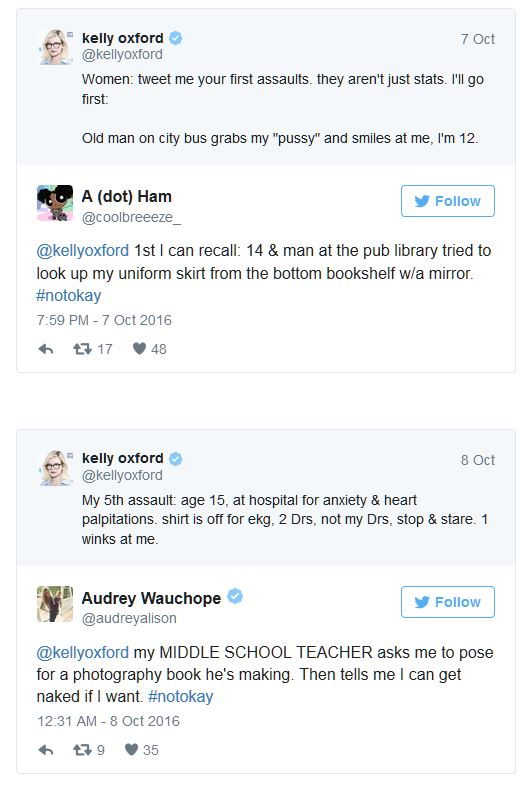 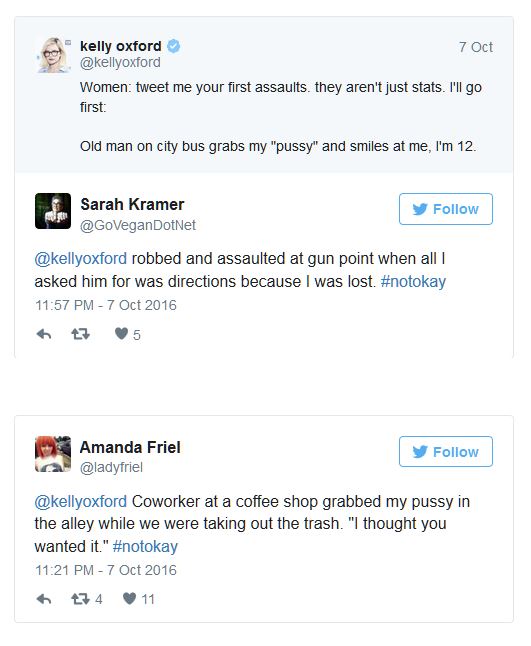 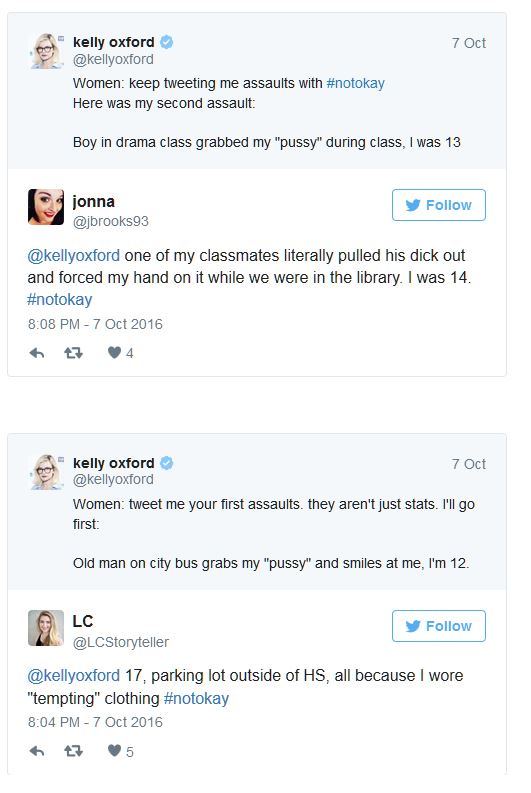 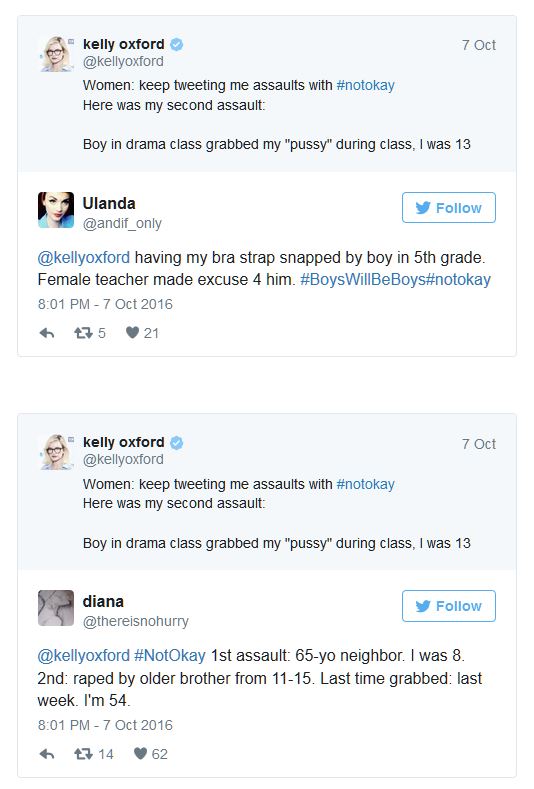 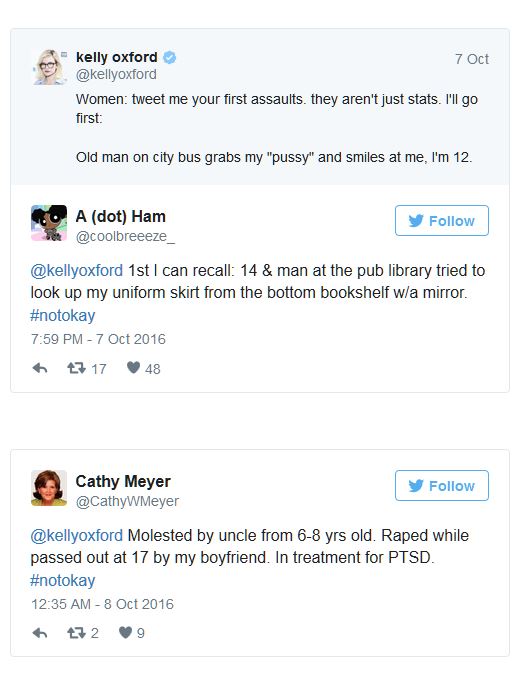 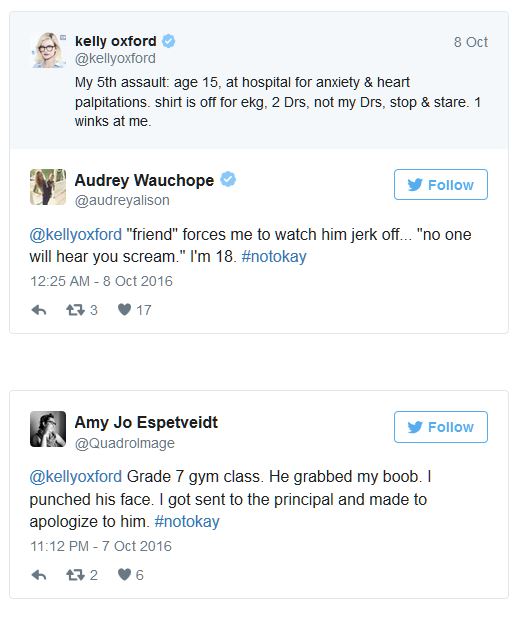 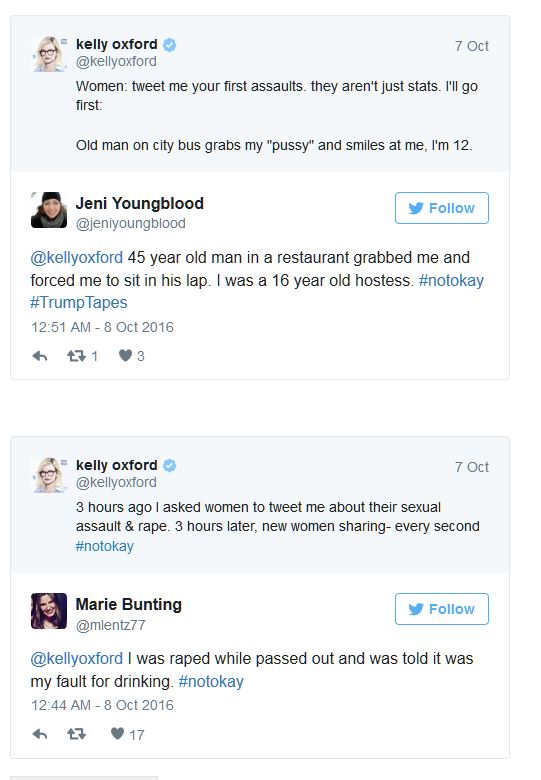 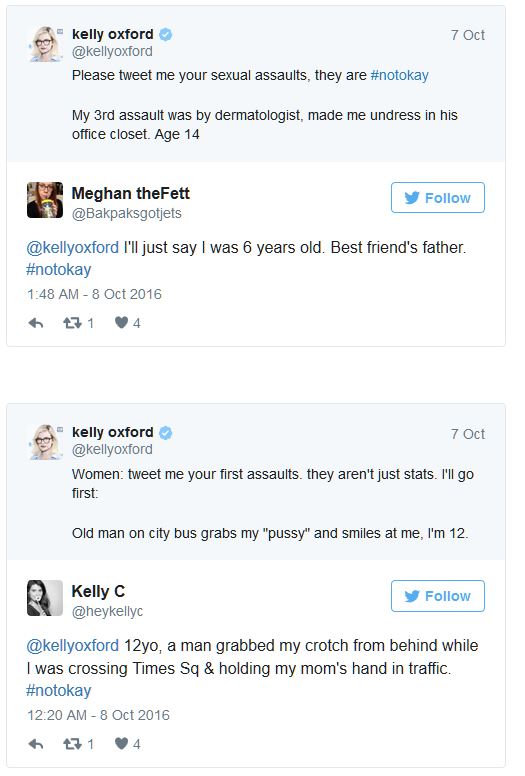 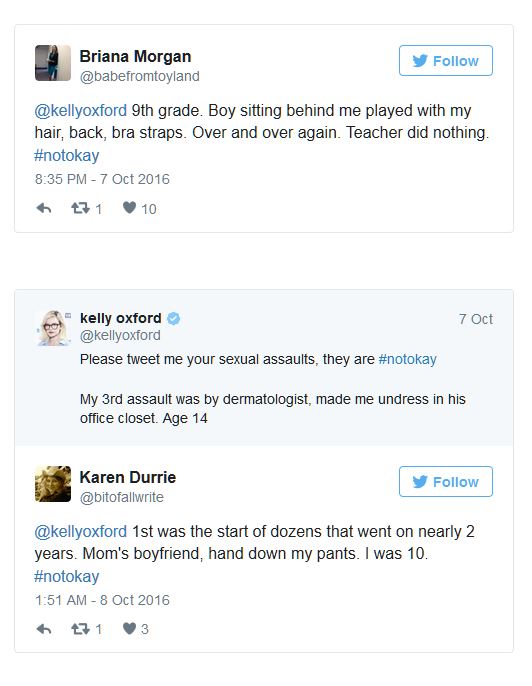 Shortly after asking survivors to share their experiences, Kelly said "thousands" of stories have already been shared. 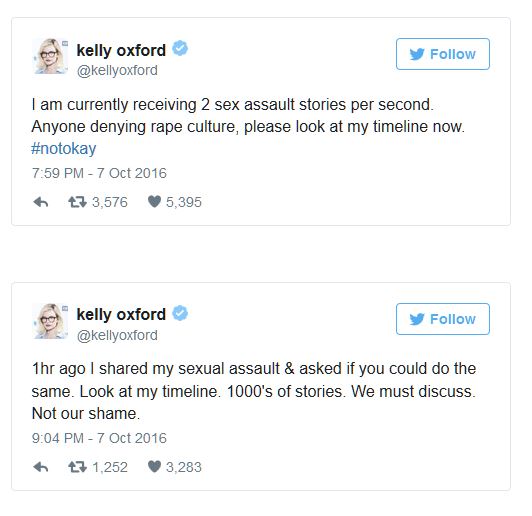 This should surprise no one.

Nearly one in four women will experience sexual assault in her lifetime, and the majority of rape survivors are young women and girls. And when we say young, we mean young — 80% of rape survivors are under age 30, 42% of female rape survivors were first raped before age 18, and girls ages 16-19 are four times more likely than the general population to be survivors of rape or attempted rape. About 15% of freshman women reported an attempted or completed rape during their first year on campus — 18.6% when researchers accounted for women who reported more than one event, according to a recent study published in the Journal of Adolescent Health.

If you're not white, your narrative is missing from much of the discussion surrounding sexual assault, even though women of color experience higher rates of sexual violence over the course of their lifetime. Approximately 40% of black women report coercive sexual contact of some kind by age 18. According to the Department of Justice, Native American women and girls are 2.5 times more likely to be raped than other populations. One in three Native women reports having been raped. This is almost double the rate at which white women are raped: 17.7%. 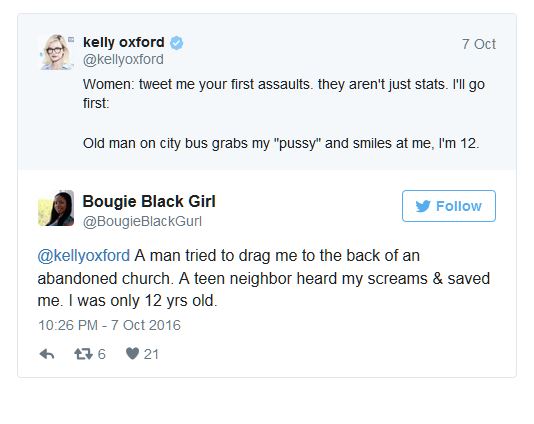 The chances of being sexually assaulted are so high for Native girls that the Native American Women’s Health Education Resource Center has created a guide called “What To Do When You’re Raped.”

In general, members of the LGBTQ community are disproportionately affected by violence as compared with their heteronormative peers. Studies show approximately 1 in 8 lesbian women (13%) and nearly half of bisexual women (46%) have been raped in their lifetime. Nearly half of bisexual men and 4 in10 gay men have experienced sexual violence other than rape in their lifetime. A horrifying 64% of transgender people have experienced sexual assault in their lifetime, and a 1 in 10 transgender individuals have been sexually assaulted in a healthcare setting.

The prevalence of sexual assault among various communities is a testament to how many people are affected by it. The sexual assault epidemic affects everybody. It not only affects women, but it affects men and people of all gender identities, ethnicities, and socioeconomic backgrounds. It will continue to be this way until we identify and acknowledge what rape culture is.

Rape culture is promoting the idea that men and boys are incapable of controlling their sexual urges around women and girls, because "boys will be boys," which actually implies that all men are inherently rapists. All men are not rapists, and they should be taught that they are very capable of not sexually assaulting anyone.

Listen here.
Another form of rape culture is victim blaming, of which common iterations include saying "they were asking for it" and asking questions like "what were you wearing?" after learning about a sexual assault. If you're really not sure if someone was asking for it or not, don't worry — we checked. We asked survivors of sexual assault what they were wearing when they were raped, and here are the results. If someone is sexually assaulted, it is never their fault, regardless of what they were wearing or how they were acting. It might be uncomfortable to admit that you can't do anything to prevent sexual assault from happening to you. That's OK. We can collectively prevent sexual assault if we all work together to make sure everyone understands what healthy and safe sex is, including what consent looks and sounds like. 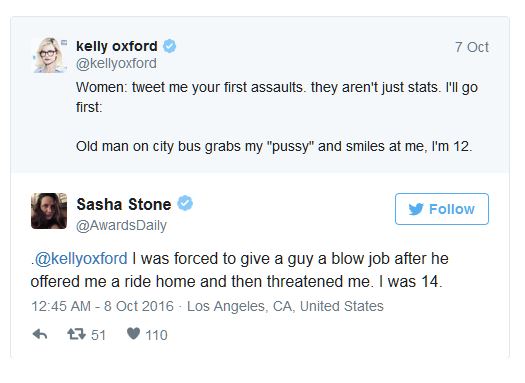 By the way, denying sex education to young people also keeps rape culture alive. Young people around the world say they want to learn more about sex, and they should be able to. Everyone should have access to information that will help them not only protect themselves but also respect each other's bodies.

The issue is not that people have sex. The issue is that people have sex without learning how to do so safely and in a way that is comfortable and positive for everyone involved. Sadly, the Guttmacher Institute reports that in the United States, sex education is only required in 24 states and the District of Columbia, and only 13 states require that sex ed is medically accurate. It should surprise no one that Donald Trump doesn't know what consent is, because most people don't know what consent is. 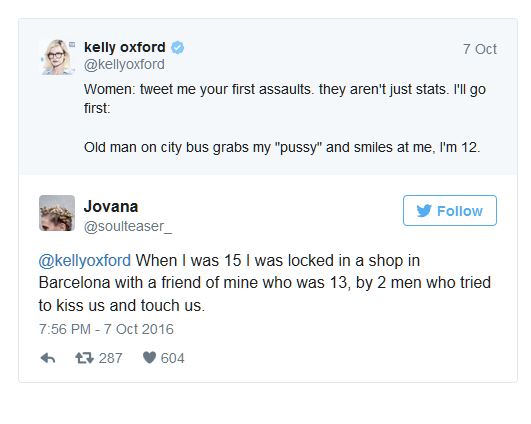 And yet, despite overwhelming public support, many states ban teachers from advocating sex ed in any way. Abstinence-only education ends the conversation about healthy sex before it even starts. There is currently zero evidence supporting abstinence-only sex education, yet in the past 25 years, Congress has spent over $1.5 billion on abstinence-only-until-marriage programs. If politicians and lawmakers continue to support these programs, we will continue to live in a world where a 12-year-old girl can be slut shamed by her principal because something she was "distracting boys" by wearing a skirt.

The first step in ending rape culture is admitting that rape culture exists. The next step is making comprehensive, body positive sex education accessible to as many people as possible. But first, register to vote and then vote. 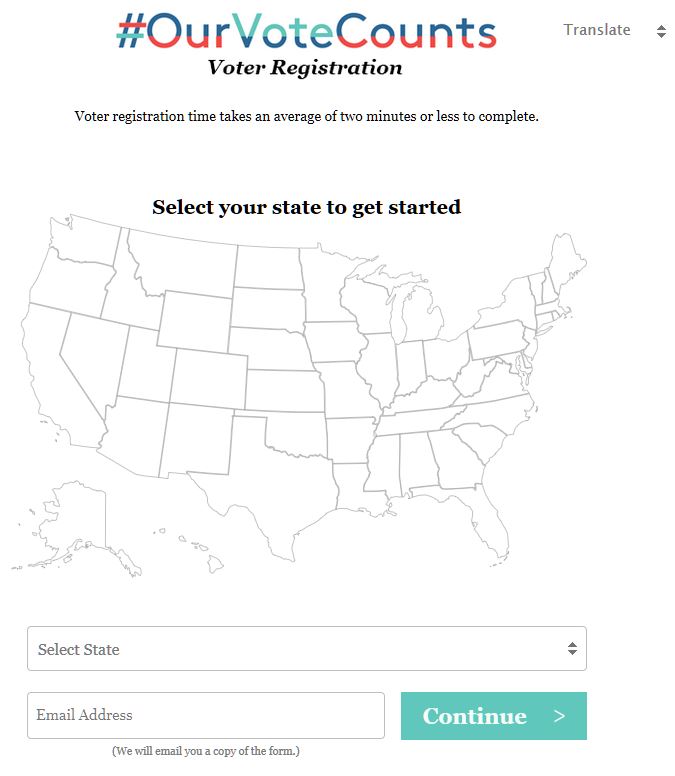 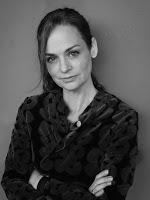