'A bank CEO should not be able to oversee a massive fraud and simply walk away to enjoy his millions in retirement,' said Sen. Elizabeth Warren 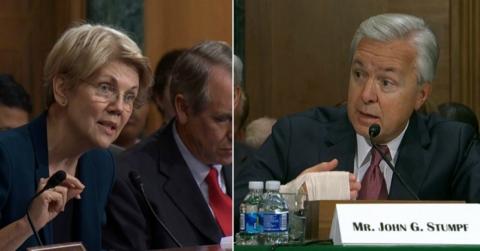 Elizabeth Warren told John Stumpf: "You should resign, you should give back the money you took while this scam was going on and you should be criminally investigated.", AP

The announced retirement of Wells Fargo CEO John Stumpf on Wednesday wasn't enough for U.S. Sen. Elizabeth Warren (D-Mass.), who said the top executive must face more consequences for his role in the recent fake-account scandal.

According to a Wells Fargo statement released late Wednesday afternoon, Stumpf had informed the company's board he was stepping down, effective immediately. The bank said its president and Chief Operating Officer (COO) Tim Sloan would take over as CEO.

While Stumpf doesn't receive a special retirement payout, executive-pay tracker Equilar estimates he'll walk with $134.1 million. The package remains that large even after Stumpf last month agreed to a $41 million clawback following a grilling he received from the Senate Banking Committee reprimanding him for not taking responsibility. He agreed to give up unvested stock, but still owns shares vested in previous years.

At that committee hearing last month, Warren skewered Stumpf for what she described as "gutless leadership."

"This is about accountability," Warren said at the time. "You should resign, you should give back the money you took while this scam was going on and you should be criminally investigated by both the Department of Justice and the Securities and Exchange Commission."

In a series of tweets and a statement on Wednesday night, Warren noted that only one of those objectives had been achieved.

"Wells Fargo was caught in a massive, years-long scam that cheated thousands of customers while senior bank executives made millions of dollars," the senator wrote on Facebook. "As I said at the hearing last month, Mr. Stumpf should resign, return every nickel he made while this scam was going on, and face an investigation by the Justice Department and SEC. So far, he's one for three."

"If Mr. Stumpf is leaving with all of his ill-gotten millions, that's still not real accountability," Warren continued. "A bank teller would face criminal charges and a prison sentence for stealing a handful of 20s from the cash drawer. A bank CEO should not be able to oversee a massive fraud and simply walk away to enjoy his millions in retirement."

This echoed a letter Warren signed onto earlier this month, in which a group of Democratic and Independent senators demanded the Justice Department, as part of its probe into the scandal, investigate whether Wells Fargo top brass should face criminal charges.

Not doing so, they warned, could reinforce "the notion that the wealthy and powerful have purchased a higher class of justice for themselves."

Indeed, as Public Citizen president Robert Weissman said Wednesday, Stumpf's forced retirement "is essentially an admission of wrongdoing that only reinforces the need to continue tough criminal investigations of the actions of Stumpf as well as other top executives."

Beyond that, Weissman declared: "Americans are beyond sick and tired of Big Banks and their executives escaping accountability. With Stumpf removed, attention will now turn to the U.S. Department of Justice to see if it will do its job. Of course, individual accountability is not enough: this too big to manage bank must be broken up."

Meanwhile, Dealbreaker reported Wednesday on how the appointment of Sloan to take Stumpf's place was not exactly reassuring.

According to his bio, Dealbreaker noted, Sloan has been at Wells Fargo longer than Stumpf and served as boss to Carrie Tolstedt, the former executive who ran the fraudulent program. Indeed, as Reuters reported, "he had oversight over Wells' retail division, where employees opened up to 2 million accounts without customers' knowledge, some of them during his tenure as COO."

"Promoting a guy that had arguably closer ties to the creation of at least 2 million unauthorized accounts, and then acting like it's a symbol of institutional change, is the kind of thing that makes Elizabeth Warren salivate with righteous rage," Thornton McEnery wrote at Dealbreaker.

"Wells Fargo's problems go from top to bottom," Khalid Taha, a former Wells Fargo personal banker who left the bank in July after suing them over sales pressures, similarly told Reuters. "Sloan is part of that problem. I can't see him as a solution."