Tens of thousands of women rallied across Argentina in response to a call for a national strike against gender violence. The labor strike also aimed to emphasize the crucial role of women in the country's economy as well as highlight the fact that they have been the first victims of massive layoffs by the current right-wing government. Organizers highlighted the link that makes poor and disadvantaged women more vulnerable to sexual violence. 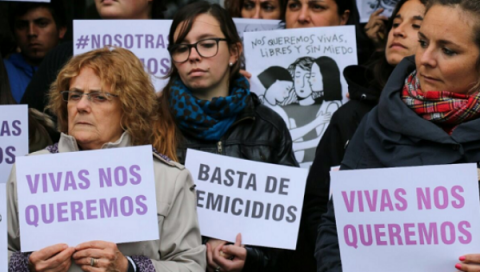 Tens of thousands of women across Argentina walked off the job Wednesday to "make noise" against gender violence and economic inequalities in the first women's national strike in the country's history in the wake of a brutal gang rape and murder of a teenage girl that has reinvigorated the fight against femicide and gender violence across the continent.

In the Argentine capital of Buenos Aires, women gathered around the downtown Obelisk monument at 5 p.m. local time and are now heading to the historical Plaza de Mayo, the city's main square in front of the Presidential Palace. On the main thoroughway, July 9 Avenue, women are also providing public sexual education classes in order to prevent sexist violence, as well as a soccer game with all-female teams in order to fight stereotypes about women and sports. In schools and kindergartens, the strike is taking the form of sexual education for children, with families welcomed to participate.

Demonstrations are also taking place in dozens of other towns in Argentina and internationally, including Mexico, Uruguay, Paraguay, Peru, Ecuador, Honduras, Guatemala, El Salvador, and U.S. and Spanish cities. "Ni Una Menos" marches are also occurring in Santiago, Chile, and at least 32 other cities Wednesday, according to local media, just days after 9-year-old Florencia Aguirre was beaten and burned alive by her step-father in Chile's southern Aysen region.

The "Ni Una Menos" collective that has spearheaded the movement against gender violence called women to strike in the streets between 1 p.m.and 2 p.m. local time, wearing black as a symbol of collective mourning over the killing of 16-year-old Lucia Perez and other victims of femicide.

The labor strike also aimed to emphasize the crucial role of women in the country's economy as well as highlight the fact that they have been the first victims of the massive layoffs carried out by the right-wing administration of Mauricio Macri in the public and private sectors. Organizers highlighted the link that makes poor and disadvantaged women more vulnerable to gender and sexual violence, including human trafficking.

“We are challenging the traditional meaning of a strike," women's rights activist Maria Florencia Alcaraz told the Buenos Aires Herald. "Behind femicides there is an economic frame that makes women more vulnerable to violence."

The mobilization went viral on social media after what is being described as one of the cruelest rape and murder cases in the country's recent history. On Oct. 8, Lucia Perez, 16, was taken from her school in Mar del Plata, forced to take cocaine, raped multiple times and “impaled” with an “unspecified object,” causing internal bleeding and resulting in her death the following day in the hospital. Three suspects have been arrested, including the two men who took her body to a medical center and tried to cover up the crime and make it look like an overdose.

A number of high-profile figures have voiced support for the demonstration on social media, including Argentine artists and media personalities. Jailed Argentine Indigenous leader Milagro Sala, dubbed the first "political prisoner" of Macri's administration, wrote an open letter addressed to the women of the country, thanking them for taking action to defend women's rights.

The Ni Una Menos, or Not One Less collective, founded in March 2015, first launched the campaign to protest the scourge of femicides in the country, which have increased exponentially in recent months. The campaign, under pressure from women workers, was then endorsed by Argentina's main labor unions. One of the country's national unions, the CTA expressed full support for the strike, but Noemi Ruiz, head of the Gender Equality commission of the other national union the CGT, said the body would only support the mobilization as a “day of struggle and reflection,” and not as a national strike.

Some organizers criticized the position. “While the CGT is drinking tea with Macri, we take to the streets,” said activist Luciana Peker to Pagina 12.

“We are striking because we earn less, we face more unemployment—10.5 percent, two more points than men—we are hit harder by precarious life and poverty,” said journalist and activist Marta Dillon, part of the anti-femicide collective.

The marches come as Macri's government promotes a bill in Congress regarding the public prosecutor's office that would effectively eliminate the special prosecutor focused on violence against women and femicide. On Wednesday, the official Twitter account of the presidential palace tweeted in support of the "Ni Una Menos" movement, promoting the number of a hotline for women suffering domestic violence.

According to data from human rights organizations, a woman in Argentina dies every 30 hours from domestic violence, and since 2008, 1,808 women have been violently killed in the country. In the last 10 days alone, at least 11 women have been killed across the country.