How we vote on November 8 will be the first step in a long process of building a new economic and political order in New York State and in the United States. It is an opportunity to push the nation - and Dems - forward. It is important to vote the Working Families Party (WFP) line for several reasons. The WFP is an independent progressive political party that in New York State can run progressive candidates who are endorsed by both the WFP and the Democratic Party. 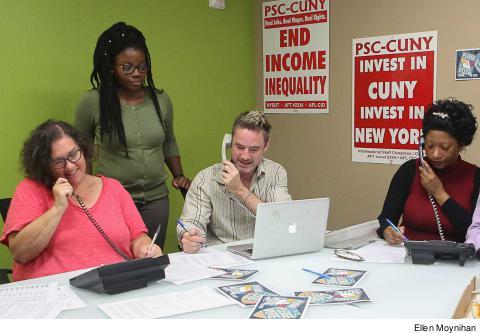 It is important to vote for Hillary Clinton for president on the Working Families Party (WFP) line, as well as other down-ballot candidates on the WFP line for several reasons, ranging from the importance of advancing a progressive policy agenda at the state level to defeating the white nationalist "Trumpism" that will live on politically even if Clinton is elected president.

First, the WFP is an independent progressive political party that in New York State can run progressive candidates who are endorsed by both the WFP and the Democratic Party. This is called fusion voting. Hillary Clintonwill appear on both the Democratic Party line and the WFP line, and a vote for Clinton (or any other candidate) on the WFP line will be credited toward the candidates’ total vote count. By voting on the WFP line, however, you will be sending a message about the future politics of the state and country. Both the PSC and the New York State United Teachers are institutional members of the WFP.

Second, this election is taking place in the aftermath of the Great Recession and in the wake of unbearable inequality being experienced by many Americans. Forty years of neoliberal policies (e.g., government austerity, privatization, bad trade deals, reduced taxes on the wealthy and anti-democratic governance including a racist criminal justice system) have left the US hollowed out with declining incomes. Only in the last year have we seen the beginning of a turnaround.

Across the political spectrum, there is a palpable discontent with the status quo. Popular movements on the left such as Occupy Wall Street, Black Lives Matter, Fight for $15 and the Dreamers, and on the Right, the Tea Party and the anti-immigration movements, express the anger, frustration and desire to overturn the existing political order.

Clearly, Bernie Sanders’s primary campaign captured the spirit of the popular resistance to this state of affairs on the left. The WFP endorsed Sanders in the primary elections and supported his call for breaking up the big banks, taxing the wealthy, canceling trade deals, increasing the minimum wage to $15 per hour, campaign finance reform, environmental justice, free public college, single-payer health care, an end to austerity policies and criminal justice reform. The WFP also has a set of similar policies that apply to New York State – and has made progress in securing a $15 per hour minimum wage plan and a 12-week paid family leave mandate. Significantly, the WFP was an important and strong supporter of the PSC’s fight for a fair contract.

In the end, the Clinton campaign won the Democratic Party nomination and the entire contest pushed the party to the left by agreeing to support a progressive Democratic Party platform that reflects compromise positions on the policies Sanders and his supporters campaigned on.

This center-left political coalition can become a new political force in the American political landscape, and it has the possibility to rewrite political and economic policies that will lead to a more prosperous and just future for all Americans. If Clinton wins, we will need to continue to fight both within that coalition and outside it to see to it that that the Democratic Party platform is implemented. Voting on the WFP line will help build a strong political institution on the progressive left that will continue to fight to implement the full agenda.

Trump’s explicitly racist, misogynist, xenophobic and authoritarian statements along with his increasingly erratic behavior, however, have alienated some key Republican constituencies (white, suburban, educated and married women) and narrowed the Republican electoral base. Republican political leaders (25 percent of national and state elected Republican leadership as of this writing), fearing electoral defeat, have refused to endorse him. Of course, these very same Republican leaders were happy to have a white nationalist wing of the party as long as they were not in positions of power, but simply delivering votes to the party.

In an effort to increase youth voter turnout, PSC members at Hostos held a "talk, text and vote," where students talked to others about the upcoming elections. Hector Soto, right, and Lizette Colón, PSC chapter chair at Hostos Community College, left, led the  event on September 27 - part of a national effort on September 27, National Voter Registration Day, by the National Institute for Civil Discourse at the University of Arizona,
Jerry Ross / Clarion
Understanding The Threat
Having a white nationalist political formation as the dominant force of one of the two major political parties is scary and unprecedented in recent political history. The Dixiecrats of the 1940s and the 1960s and 1970s Wallace candidacies were largely regional expressions of white nationalism. Trumpism, on the other hand, has become a national political force.

As the election stands as of this writing, national polls and election forecasting gurus like Nate Silver indicate that Trump will lose the election, but that doesn’t mean Trumpism will be defeated. Especially at the state and local level, Trumpism may continue to be an expressive form for those who feel alienated from existing political and social institutions. Just as conservative talk radio has become a potent political force, Trumpism may emerge after the election in various forms. That is why it is important to continue to build a vital progressive force at the state and local levels. Voting for “down-ballot” WFP candidates is an effective way to build local and state leadership that can confront white nationalism and Trumpism and put into effect policies that will be seen as concrete alternatives to the misdirection of Trumpism.

Fourth, both major party candidates and their campaigns have made the strategic choice to focus on the personality and “fitness” of the other candidate. Trump’s fitness is a real issue and with everything from his sexual predatory behavior to his outrageous outbursts to the constant stream of reports about his questionable business practices, he has provided the Clinton campaign with much material. Clinton, alternatively, has been in the public eye for over 30 years and there is an entire industry of “Clinton hatred.” Many Republican politicians have spent their careers targeting Clinton scandals and attacking everything the Clintons touch. This plays right into Trump’s wheelhouse: the politics of personal destruction and identifying Clinton’s persona with the status quo.

Not surprisingly, much of the popular media coverage of the presidential campaign has focused on the personalities of Trump and Clinton. The resulting horse race and scandal reporting and negativity of the campaigns have turned off voters and obfuscated the serious political choices at hand.

[Steve London is a former first vice president and current university-wide officer at the PSC and an associate professor of politics and visiting fellow at the Murphy Institute for Worker Education and Labor Studies. He is also a member of the Working Families Party state committee.]