An estimated 60.7 percent of the world’s workers labor in the informal economy, without legal or social protections. While the impact of working without the freedom to organize is most dire in the world’s poorest countries, U.S. workers are not an exception to the types of labor rights abuses the described in a United Nations Report. 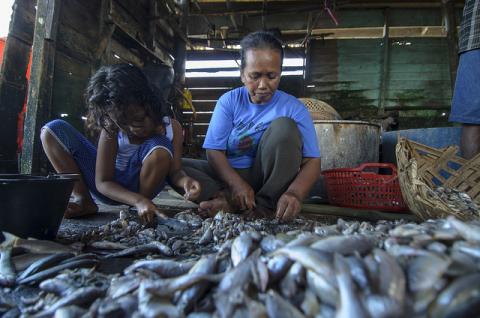 The report singles out the plight of migrant, women and domestic workers, many of whom lack formal employment. , ILO in Asia and the Pacific/ Flickr

Freedom of peaceful assembly and association, says a new United Nations report, “are essential to human dignity, economic empowerment, sustainable development and democracy. They are the gateway to all other rights; without them, all other human and civil rights are in jeopardy.” But these rights, says the report, are being jeopardized by the recent dramatic rise in the power of large multinational corporations and their dependence on global supply chains and the growing informal and migrant workforce. While these rights are most imperiled in the world’s poorest countries, workers in the United States are also facing these problems.

Undertaken by the special rapporteur on the rights to freedom of peaceful assembly and of association, the U.N. report singles out the plight of migrant, women and domestic workers, many of whom lack formal employment. In fact, worldwide, most workers are now without formal employment arrangements. According to the report, an estimated 60.7 percent of the world’s workers “labor in the informal economy, where employment relationships are not legally regulated or socially protected.” In some countries this workforce rises to 90 percent. The report also notes that while such employment has always existed, the rise of global supply chains has “exponentially expanded its growth.” As a result, some 1.5 billion people or 46 percent of the world’s workers, now experience what the report calls “precarious employment.” More than 70 percent of people in Southern Asia and sub-Saharan Africa work this way.

This workforce includes self-employed, contract and part-time workers, and day laborers—and often those working in special economic zones where, as the report describes, “worker protections are sharply reduced or eliminated in order to attract foreign investment.” It encompasses professions of all skill levels, from teachers, to taxi drivers, call-center and agricultural workers. These arrangements often involve on-call schedules, short-term contracts and multi-layered subcontracts—all of which add to workers’ difficulties in asserting rights and difficulties in enforcing labor laws. Women, because they make up the majority of the world’s agricultural and domestic workers, are especially burdened by the lack of labor protections.

As anyone working in this world knows, such jobs do not have typical employment benefits like health and unemployment insurance, sick leave, overtime pay and other wage protections. Workers have little opportunity to organize, form unions or bargain for higher wages and better working conditions. This situation, says the U.N. report, is contributing to wealth inequality worldwide.

But it’s not just globalization that’s swelling the ranks of workers whose right to organize is in jeopardy. Conflict, war and climate change are also contributing to the world’s growing migrant population that’s now its largestsince World War II, notes Roger-Mark De Souza, director of population, environmental security and resilience at the Wilson Center. These people “have become a major low-wage workforce that is excluded from opportunities to bargain collectively for improved wages and working conditions,” says De Souza. And, he explains, these workers are now woven into the fabric of world economics—sending to their home countries an estimated $580 billion in 2014.

The United States is no exception

While the impact of working without the freedom to organize is most dire in the world’s poorest countries, “the U.S. is no exception to the types of labor rights abuses the report lays out,” Oxfam America regional director Minor Sinclair tells In These Times. “The abuses of labor and the changes in the economy, and how that disadvantages labor and labor rights—the U.S. is as much caught up in that as any other country,” says Sinclair.

The economy’s structure is changing “in a way that disadvantages even more workers,” Sinclair explains. Whether through layers of subcontractors that ultimately employ factory workers in Bangladesh, U.S. meat processing workers or college graduates working the “gig economy,” the report reflects the fact that “increasingly, people don’t have employers that are responsible for workers’ rights,” says Sinclair. And this makes it “harder for workers to advocate for (these rights) and protections.”

The impacts of this situation are, of course, most acute at the low-wage end of the employment spectrum, a workforce that often includes immigrant workers. In the United States, as elsewhere, farmworkers and food processing workers are especially vulnerable and lacking in protected labor rights, as are domestic workers. The report says that in the United States, immigrant workers “who attempt to exercise their rights are often blacklisted by employers, who use the threat of denied future work opportunities to silence workers.”

Sinclair also notes the impact and rise of right-to-work laws across the United States, which are now in place in 26 states. “Basic labor rights, the right to unionize and right to strike, are severely compromised by right-to-work laws,” he says. The report describes what’s happened to workers in states in the U.S. South where these laws are in place—and how corporations have taken advantage of the lack of unionization.

When it comes to solutions, the U.N. report sees little progress in support of workers’ freedom to assemble and organize coming from voluntary corporate social responsibility and auditing programs. Such programs, says the report, “are not a substitute for legally binding, robust enforcement of the rights to freedom of peaceful assembly and of association.” It calls on businesses to refrain from anti-union policies and practices and to support labor rights throughout their supply chains, especially for workers in “vulnerable situations,” including migrant and minority group workers.

Despite this trend, Oxfam’s Sinclair says he sees “some real signs of hope in the legislative work around the right to $15 per hour and the new federal overtime regulation.” He also notes that, albeit slowly, corporations are beginning to realize that “rights erosion is not a sustainable business model.” That said, he also fears that we’re moving towards “a bipolar work situation,” where “some people have workers’ rights and some people don’t.” But because this situation now affects everyone from university teachers to auto manufacturing and farm workers, he also holds out hope the issue of workers’ rights will finally get substantive attention.

“We welcome the U.N. report and the opportunity it provides to raise awareness and highlight the many challenges workers still face globally in exercising this fundamental right to freedom of association,” Carol Pier, deputy undersecretary for international labor affairs at the U.S. Department of Labor, said in a statement. “Working to protect and promote workers’ rights to organize and bargain collectively is a priority for the Department, at home and abroad.”

Currently on the U.N. agenda: a legally-binding human rights agreement for corporations and businesses.

In These Time special 40th anniversary issue is out now. Subscribe today and get a free copy.