Rank-and-File Union Members Challenge AFL-CIO Leadership's Support for Pipeline. A delegation from Labor For Standing Rock, comprised of rank-and-file workers and union members to mobilize growing labor support for the First Nation's fight against the Dakota Access Pipeline at the Standing Rock camp the weekend of October 29. 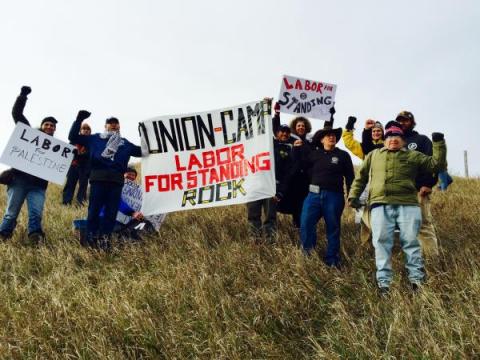 Despite escalating police violenceand AFL-CIO leadershipof pipeline, a delegation of union members from around the U.S. are spending the weekend of October 29 at Standing Rock camp to join Sioux water protectors against Dakota Access Pipeline (DAPL.)

The delegation from Labor For Standing Rock(LSR), comprised of rank-and-file union members and working people.

Liam Cain,Union Laborer at LIUNA Local 1271 Cheyenne, WYand a LSR spokesperson, over years worked on numerous heavy construction sites and pipeline construction spreads. "To the union laborers working on these projects I would just implore you to listen to what regular folks are saying," Cain said. "Don't just listen to the bosses, and not to just the echo-chambers on the spread.

"Listen to the water protectors, listen to folks talking about just transition, a view of the future, involving good paying union jobs, involving many of your skill-sets. Just generating energy in a much more environmentally sustainable manner, rather than just gross over reliance on fossil fuels, that we currently engage in. As the saying goes, 'there's no jobs on a dead planet'."

Cliff Willmengis a registered nurse with UFCW Local 7, and former member of United Brotherhood of Carpenters Local 1 in Chicago. He is a leader in Colorado fight against fracking, a rank-and-file labor activist and organizer for the Colorado Community Rights Amendment. Cliff’s work against the oil and gas industry made national headlines when Lafayette, Colorado banned frackingin 2013. He and his daughter Sasha delivered water tanks to Standing Rock Camp after authorities removed the water supply in August.

“As a healthcare provider, as a father of two, and as a union member I will be heading up to Standing Rock,” said Willmeng, union member and a co-founder of LSR. "We will be supporting the First Nations fight against the Dakota Access Pipeline, to protect the environment for my kids, and as a rejection of the decision of the AFL-CIO support the pipeline."

Michael Letwinis former President of the Association of Legal Aid Attorneys/UAW Local 2325in New York City, and Co-Convener of Labor for Palestine, whose online petitionin opposition to DAPL has garnered more than 12,000 signers and helped lay the basis for Labor for Standing Rock. In 1973, at age 16, he and others were arrested by the Nixon-era FBI under the Rap Brown Actfor participating in a relief caravanto the American Indian Movement occupation at Wounded Knee.

"Escalating police attacks against unarmed water protectors at Standing Rock on behalf of the oil and gas industry evokes images of Wounded Knee in 1890 and 1973, brutality against the civil rights movement, and state violence today from Ferguson and Baltimore to Palestine," Letwin said. "The labor movement has faced similar violence throughout its history, and from the same forces of greed and injustice."

Labor For Standing Rockwas created by rank-and-file workers and union members to mobilize growing labor support for the First Nation's fight against the Dakota Access Pipeline.

The response from working people around the country has been nothing short of staggering. It is clear that the labor movement is no longer content to sit aside while Native American sovereignty is violated, and while land and water are risked. No oil company profits are more important than our rights and environment.

"We at Oceti Sakowin Campwelcome any and all support from our Union brothers and sisters," said Standing Rock Council in an October 13 message to Labor for Standing Rock. "This camp stands to protect our sacred water and support a new energy paradigm, jobs and work in green energy fields. We welcome your support in any ways you feel appropriate, join us in paving a new road to a sustainable future for many future generations."