Cuba's Sustainable Agro-Ecological Model Could Save the World

On World Food Day, teleSUR spoke to Professor Raj Patel, an award-winning writer and defender of food security and sustainable models of agriculture. 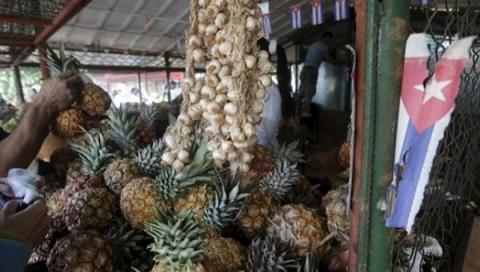 A Cuban flag hangs near pineapples and onions at a state market in Havana. , Reuters

In Cuba, where the external conditions—the U.S. blockade and the collapse of the USSR—along with internal socialist planning, have compelled Cuban farmers to adopt an independent model of agriculture to feed the population, without importing expensive chemicals, the model that has developed is a world leader in sustainability.

teleSUR: What do you think will happen to the future of the agro-ecological model in Cuba, as the normalization of diplomatic relations with the United States may prove to serve the U.S. agricultural sector pushing to grab its share of Cuban markets?

Patel: I am very worried, just as everyone in Cuba should be. The model that has flourished in Cuba is a model of sustainability, where scientists are directly accountable to farmers, where farmers are treated—not as idiots—but as partners in the field who experiment and innovate, and the real genius of the Cuban experiment has been the democratization of expertise, knowledge and power.

And my great worry about the U.S. is that we've had a lot of reports, and documents from Wikileaks, that every member of the administration is pushing for Monsanto and Genetically Modified Organisms. Cuban citizens need to know what's at stake—just like the rest of us—as the promise of this beautiful example could be extinguished soon, and I think we have to do everything we can to avoid that.

teleSUR: Because of the circumstances—the collapse of the USSR and the U.S. blockade—Cuban farmers had to adapt and produce food without the support of imported pesticides or fertilizers. Has the production been able to guarantee food security for all Cubans?

Patel: Cuba would not produce enough to feed the population if the population wanted to eat like Americans. That's to say the U.S. diet requires so much in terms of water, fuel, etc., because of the high level of meat consumption. But it's not a defect in Cuba's model of agriculture, rather in the U.S. model of consumption: we consume too much meat.

I think it's unfair to blame Cuba for not being able to sustain a U.S. diet. If everyone ate meat as much as the United States does, we would need seven planets to feed everyone. It's the U.S. diet that is unsustainable, rather than the model of agriculture in Cuba being under-productive.

teleSUR: Does Cuba still rely on food imports, like cereals?

Patel: They are importing rice I believe. But they are producing most of their fruits and vegetables. It's hard to assess the model fairly, because now with the Venezuelan oil coming (since Hugo Chavez' election in 1999), there's a lot more of industrial agriculture happening. That means a return to old kinds of models, and it's hard to know how much of the current situation in Cuba to attribute to a sustainable model as opposed to the unsustainable model because there's a big mix at the moment. It's not a pure case study.

But what we do know is that this kind of agro-ecology—where you are growing food very intensively, recycling nutrients through the land, not just growing a single crop but multiple crops, building soil fertility and managing well water resources, using less fertilizers and pesticides—well as far as we are concern, there is a lot more sustainability associated with that model, and a lot more food per unit of area, than if you are farming in the Midwest in the United States. That's backed up by dozens and dozens of peer-reviewed studies comparing agro-ecology with industrial agriculture.

teleSUR: And it's also more disaster-proof—a crucial quality with the incrementation of natural disasters because of global warming?

Patel: Absolutely, particularly now that we've had one hurricane pass through the Caribbean and there are more on the way. Yes, it's important to remember that if you have a diversified portfolio of crops, then if one crop bites the dust then you'll still have a range of options. We haven't had evidence yet but talking with farmers, agro-ecological soil is much better at resisting floods, because there's a lot more topsoil, so it does not get washed away as much.

teleSUR: Could the agro-ecological model implemented three decades ago in Cuba be transposed in other parts of the world today, as we face new challenges like climate change and urbanization?

Patel: Actually many countries are already adopting this model, in Latin America (check the work of SLOAS) but also in Laos, Malawi, where I have seen incredible results to fight malnutrition on very unpromising land thanks to the agro-ecological approach.

But people need to realize also that the story of agro-ecology is not just about “you must grow corn! And beans! And squash!” What defines agro-ecology is understanding the ecology that you are in, and then using that knowledge in order to develop appropriate systems that match where you are in the world. Agro-ecology is about principles, there's no recipe.

Not only can it work in other parts of the world, it is already working, because a lot of farmers are experiencing climate change. It does require a shift away from meat consumption, for instance, consuming less of it but of much better quality.

Of course, it is possible to have unsustainable production of—let's say—lettuce, you don't need animals to make agriculture unsustainable, for instance, if you grow only lettuce with tons of chemicals and a huge amount of water. But that's not a fair comparison, and actually many agro-ecological systems do include meat, but way less meat. It's not about meat-eaters vs. vegetarians, it's about sustainable vs. unsustainable.