U.S. District Court Judge John Vazquez has given the party a deadline of 5:00 pm Tuesday by which time it must detail "agreements in any form between [the RNC] and the presidential campaign of Donald J. Trump...regarding voter fraud, ballot security, ballot integrity, poll watching, or poll monitoring." 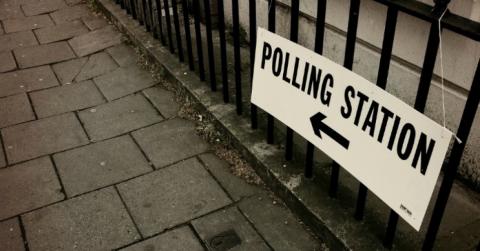 In one instance, a Trump campaign observer in Las Vegas was found "yelling at voters, accusing voters and poll workers of breaking the law, talking to voters as they stood in line, and providing them with incorrect information.", John Keane/cc/flickr

Donald Trump's "rigged election" claims and calls for supporters to monitor polling places may have provided good headline fodder, but at least one federal judge is raising concerns over whether the Republican National Committee (RNC) is actually engaging in illegal "ballot security" measures, as its nominee has claimed.

U.S. District Court Judge John Vazquez has given the party a deadline of 5:00pm Tuesday by which time it must detail "agreements in any form between [the RNC] and the presidential campaign of Donald J. Trump...regarding voter fraud, ballot security, ballot integrity, poll watching, or poll monitoring."

Referencing claims made by GOP Vice Presidential nominee Mike Pence and Trump campaign manager Kellyanne Conway that the party would help engage in poll monitoring, the order notes that such an agreement would be in violation of the 1982 Consent Decree, which "settl[ed] a case alleging that GOP pollwatchers sought to intimidate minority voters in a practice then known as 'caging,'" as Politico's Josh Gerstein explained.

"The agreements allow the RNC to organize pollwatchers, but prohibit any effort to intimidate voters as they enter a polling place or to challenge individual voters, except as part of a program approved in advance by the court," Gerstein further notes.

Rick Hasen, professor of Law and Political Science at UC Irvine and blogger with the Election Law Blog, who has been following the case, said the court order was "probably the biggest election law victory of Dems in the last month. And it is only a discovery order."

The order (pdf) came in response to charges made by the Democratic National Committee (DNC) last week that the RNC had lied about poll watching activities in a number of states.

Of those suits, Hasen wrote Monday:

I haven't yet gone through each complaint in detail yet, but all seem to raise two claims, one under the Voting Rights Act and one under the Ku Klux Klan Act, aimed at preventing voter intimidation. The complaints allege that the state parties are cooperating with the Trump campaign and Stone to stir up unsubstantiated claims of voter fraud and to intimidate minority voters. This complaint comes on top of the earlier-filed complaint alleging that Trump and the RNC are violating the long-standing and soon expiring (unless extended) consent decree against the RNC.

The new complaints seek temporary restraining orders which will bar activities such as "exit polling" from the Stone people which could be used to intimidate voters.

It is not clear that a court would issue a vague order to stop "voter intimidation," as requested in the relief in these suits (as that term would be vague and difficult to enforce). But the suits will first bring publicity to the activities, and second get these parties on record stating that they do not plan on engaging in voter intimidation, which itself could be useful in the event of problems on election day.

In a series of social media posts, Hasen further explained that "[t]his is a big deal because Ds will get heads up on RNC election day plans and because they might uncover violations of order."

In an affidavit (pdf) filed by a DNC poll observer, attorney Ellyn Lindsay recounts her conversation with an RNC volunteer. In addition to relating how the volunteer "had been instructed by the RNC that she did not have to tell anyone the party or organization for which she was observing the polls," Lindsay describes an incident in which a Trump campaign observer harassed Las Vegas voters:

In addition to discussing her work with the RNC, Ms. Holland also told me that just the day before, October 27, 2016, a Trump Campaign observer had been asked to leave the Arroyo Market Square [in Las Vegas] early voting location for yelling at voters, accusing voters and poll workers of breaking the law, talking to voters as they stood in line, and providing them with incorrect information. I confirmed Ms. Holland's story with the poll workers at the early voting location when I returned on October 30. The poll workers explained that the Trump Campaign observer was permanently banned from the voting location because of her disruptive behavior, but that she had continued to attempt to return to the voting site.

With early voting underway in an increasingly close and contentious presidential contest, advocates say that people must be guaranteed open, fair, and safe access to the voting booth.