labor Don't Mourn, Organize: Statement of the UE National Officers on the Election of Donald Trump

With neoliberalism discredited and the political establishments of both parties defeated, we must offer real solutions on employment, economic inequality, and labor rights by organizing a grass roots, democratic rank-and-file movement, larger and more powerful than Bernie Sanders’ presidential campaign. It’s time to build broader, unite stronger, and fight harder than we’ve ever done before. 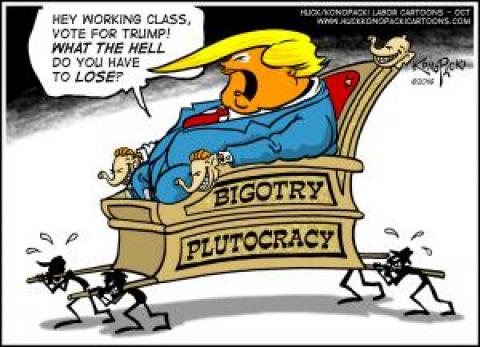 The election of Donald Trump, while very disturbing, should not come as a complete shock. For the past several decades the political establishment in both parties has advanced a set of policies known as neoliberalism that has made life harder for working people. Neoliberalism includes free trade, deregulation, privatization, and dismantling the social safety net, and it has been pursued aggressively by Republican administrations since Reagan, and Democratic administrations starting with Bill Clinton. This election year brought rebellion in both parties against what Bernie Sanders called “establishment politics and establishment economics.” That rebellion took the form, in the Democratic primaries, of the inclusive progressive populism of Sanders, and on the Republican side, the authoritarian, bigoted populism of Trump.

By rigging the process to block Sanders and nominate Hillary Clinton, the ultimate insider and establishment figure, the Democratic Party leadership, aided by the corporate media, sowed the seeds of Trump’s victory. Neither Clinton nor any other candidate from her wing of the Democratic Party could have credibly addressed the concerns that were central to working people of all backgrounds: the loss of economic security, in particular good-paying jobs at the hands of globalization and runaway corporate power.

Had Bernie Sanders or someone like him been the nominee, the outcome of this election would have been very different. Polling has consistently shown that Sanders would easily defeat Trump, and he did especially well last spring in crucial states like Michigan and Wisconsin. But instead, we have the cruel irony that Donald Trump, a man born into great wealth who has shafted working people throughout his business career, was able to cast himself as a rebel prepared to bring down globalization and create new jobs, and to use that message to defeat the establishment wings of both the Republican and Democratic parties.

Trump’s scapegoating of Latino immigrants and Muslims and his open appeals to racism and sexism are extremely troubling. Racists as extreme as the Ku Klux Klan and so-called “white nationalists” embraced Trump as their candidate and are emboldened by his victory. Trump chose as his running mate Mike Pence, who made his name politically as an extreme homophobe. Trump’s lifelong disrespect and abuse of women is now well known, and he fully embraced his party’s anti-women agenda.

Our response must continue to be an aggressive rejection of all forms of bigotry and divisiveness everywhere, while fighting all attacks on human and civil rights by the incoming administration. We must stand up against hate crimes and acts of racial and sexual harassment. Solidarity is our only recourse in the face of the bosses’ attempts to divide us and is needed now more than ever. UE’s founding principle to defend all people regardless of age, sex, nationality, race, creed, sexual orientation, gender identity, or political beliefs is just as important today as when it was enshrined into the UE Constitution more than 80 years ago.

Make no mistake about what we face. Donald Trump, who in the first Republican debate said, “Wages are too high,” has endorsed “right-to-work” laws which severely weaken labor unions.  We believe Trump will revoke every pro-labor executive order that Obama signed, and appoint anti-union executives to run the Department of Labor and the National Labor Relations Board, as well as anti-labor federal judges. Early in his primary campaign Trump said he was against cutting Social Security or Medicare, but the 2016 Republican Platform calls for attacking both programs, and House Speaker Paul Ryan is again sharpening his knife to slash Medicare, which has long been one of his goals.

When Ronald Reagan fired 14,000 air traffic controllers at the start of his presidency in 1981 and destroyed their union (PATCO), the leadership of the AFL-CIO rejected rank-and-file calls all over the country for a general strike and instead called for a big rally. PATCO was busted and it signaled the beginning of the epidemic of union-busting that has plagued workers ever since. What will be the labor movement’s response to renewed efforts to wipe out unions?

Anti-worker Republicans are emboldened on the national stage and in state capitals as well. UE will fight on behalf of our members to preserve their rights, in Iowa and elsewhere.

This election is a major setback in the fight to preserve the Earth as a habitable planet for humans and other species. Trump has embraced the extreme right-wing fiction that climate change is a “hoax”, and says he will remove all restrictions on extracting and burning fossil fuels.  He is expected to do nothing to bring about a just transition to renewable energy. UE rejects any attempts by Trump to dismantle environmental protections or to sell off the national parks and hand over public lands to corporate control.

This crisis, however, provides new opportunities for the labor and progressive movements. With neoliberalism discredited and the political establishments of both parties defeated, we must offer real solutions on employment, economic inequality, and labor rights by organizing a grass roots, democratic rank-and-file movement, larger and more powerful than Bernie Sanders’ presidential campaign. We have two years until the Congressional mid-term elections. UE is prepared to work with organizations and individuals who are interested in building a progressive political movement that can advance the interests of all working people.

It’s time to build broader, unite stronger, and fight harder than we’ve ever done before.