This Wasn't a Working-Class Revolt. It Was a White Revolt.

Resentment won this election. It was a middle-finger, throw-caution-to-the-wind, damn-the-consequences vote - cast overwhelmingly by white people. Only white people had the luxury and the safety to ignore Trump's promises to restore law and order, to deport millions of immigrants and to endanger Americans who practice the world's second most popular religion. In their anger and their desire for change, Trump voters elected a racist and sexist president. 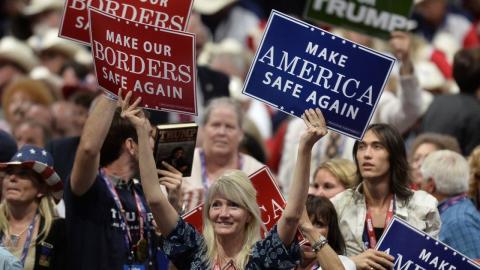 His phony economic populism was the icing on the cake - the cherry on top of the dog-whistle sundae. It was not the driving motivation behind Trump voters.

It was a middle-finger, throw-caution-to-the-wind, damn-the-consequences vote - cast overwhelmingly by white people.

A quarter of Trump voters said he was not qualified to be president, yet still voted for him to lead the country. Trump was as likely to win affluent voters — individuals making more than $100,000 — as Clinton. This wasn’t a working-class revolt. It was a white revolt.

Did Democrats do something wrong? Absolutely, but not just in this election. For the last three decades, the party has abandoned pocketbook issues and working-class people in favor of business leaders and Wall Street titans. The Republican Party never had an economic platform for the working class, just its effective Southern strategy: blame African-Americans (and now immigrants, too) for white struggle, and position government as the finger on the scale tipping the advantage to people of color.

For the last three decades, the [Democratic] party has abandoned pocket book issues and working class people in favor of business leaders and Wall Street titans.

A full-throttle Democratic commitment to once again being the party of the working class — the janitors, home health aides, housekeepers and what’s left of our factory workers — might have provided a bulwark against white resentment. In fact, Clinton won the votes of people we’d consider working-class — those with yearly incomes below $50,000.  Clinton won the votes of people who are fighting to protect hard-fought gains but still waiting for equity: people of color and women with college degrees. Clinton also won the votes of millennials, those under the age of 30, who more than any other generation are bearing the burden of our failed economic paradigms.

So what comes next? Every indication is that the Democrats will engage in soul-searching. We’re all trying to figure out “what went wrong.” As a former working-class kid from Ohio whose mom and siblings epitomize the white working class, I’ll offer caution against two explanations. First, we should not forget that Hillary Clinton won the popular vote — so she’s not the terribly flawed candidate many want to paint her as. Second, we should avoid the temptation to blame the loss on being out of touch with “middle America.”

This didn’t happen because you like chardonnay and the white working class likes beer. Thinking that this vote comes down to where people shop, the television shows they watch or what kind of alcohol they like to drink after a long day of work is an elitist reduction of people to their consumer habits. Please don’t do it. Instead, white liberals and progressives, we’ve got to grapple with the reality that we lost this election largely due to white privilege.

White parents can wake up in Trump’s America and not worry their kid will be told “to go home” despite being born here. White parents, despite living in poverty, won’t experience the aggressive policing Trump championed. And white Christians won’t be viewed as threats because of the religion they practice. These incidents are already happening just days after the election. The white working class will suffer none of these abuses in Trump’s America.

[Tamara Draut is vice president of Policy and Research at Demos Action and author of Sleeping Giant: How America’s New Working Class Will Transform America (2016). Follow her on Twitter: @tamaradraut.]