Any effort to block wage increases, gut workers’ rights or healthcare, deport immigrants, or support racism or racist policies, will be met with unrelenting opposition. 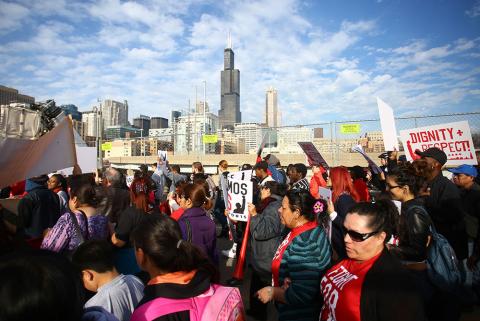 I was really discouraged when Ronald Reagan was reelected in 1984.  His first election might have been a fluke; it was followed by a recession and a huge wave of protests.  His reelection was a landslide.

But a few weeks later, civil rights leaders, union officials, black elected officials and hundreds of activists began a sustained campaign of civil disobedience at the South African Embassy in Washington. They exposed the Reagan administration’s policy of “constructive engagement” with South Africa and played a small but significant role in the fall of the apartheid regime over the following years. They took the initiative and moved the ball forward.

Since then, every time an election doesn’t go my way (which is pretty often), I look to the grassroots for hope.

Donald Trump’s victory feels worse than Reagan’s. Although Trump lost the popular vote, his party controls Congress, and he’s poised to shape the Supreme Court for the next generation. He’s brought anti-immigrant, anti-Muslim bigotry into the open – with neo-Nazis flocking to Washington to help shape his administration brazenly giving “Sieg Heil” salutes.

Who will stand up, take to the streets and challenge the new regime? Will Black Lives Matter, which changed the national conversation about race in recent years, get traction against Trump’s assault on police reform? Will immigrants, who a decade ago blocked draconian legislation in Congress and dramatically shifted the nation’s political dynamic, stand up to increased deportations and religious registries?

One group that is soldiering on regardless of shifting political winds is low-wage workers. Fight for 15, which represents fast food workers, announced Monday that “as newly elected politicians and newly empowered corporate special interests threaten an extremist agenda to move the country to the right,” their members “will not back down.”

The group announced “their most disruptive protests yet” will be held in 340 cities next Tuesday, Nov. 29.

Low-wage workers have a couple of things going for them.  There are a lot of them: 64 million American workers are paid less than $15 an hour.  And they have broad support: Ballot initiatives to raise the minimum wage passed in four states on Nov. 9 – in each case with more votes than either presidential candidate received.  (Recall that a referendum backing a higher minimum wage got far more votes than Gov. Bruce Rauner received in Illinois two years ago.)

In Chicago, striking workers will engage in civil disobedience at a McDonald’s (location to be announced) at 6 a.m. on Tuesday.  That’s the exact four-year anniversary of the first walkout at a McDonald’s in New York City, which launched Fight for 15.  Chicago was the site of the movement’s second strike, notes Tyree Johnson. Through the organization, “I’ve gained the respect of my bosses,” said Johnson, who’s worked at McDonald’s for 24 years and been part of Fight for 15 from the beginning. “I come to work with my head high.”

At 9 a.m. hospital workers and supporters will rally for a $15 hourly wage  and union rights at Northwestern Memorial Hospital. They’re among a range of low-paid occupations, from day care workers to adjunct faculty at universities, who have joined the movement.

At noon, workers at O’Hare will go on strike, as workers at more than a dozen airports nationally protest for a $15 hourly wage and union rights.  Baggage handlers, cabin cleaners and wheelchair attendants used to work for airlines, which paid family-sustaining wages along with health and pension benefits, said Izabela Miltko of SEIU Local 1.  In the past 15 years subcontracting has skyrocketed while pay has plummeted – from $23 an hour for baggage handlers in 2000 to $11 an hour today – and benefits have disappeared.

The subcontractors have also been hit with charges of wage theft, health and safety violations and unfair labor practices, including retaliation for union organizing.

Organizing drives among subcontracted workers at airports in Los Angeles, Philadelphia and Minneapolis have recently won significant pay hikes and recognition of union rights, Miltko said.  In each case, she said, progress came when airlines and city administrations took responsibility and came to the table.

That hasn’t happened in Chicago, where Mayor Rahm Emanuel has stood by subcontractors caught up in scandal.

One thing should be clear, Johnson said: “We’re not going to give up.”  He added: “I’m willing to stay in this fight as long as it takes.  My heart is in it.”

The Chicago Reporter is a nonprofit investigative news organization that focuses on race, poverty and income inequality. The Reporter was founded by civil rights activist John McDermott in 1972 to measure the city's progress toward racial equality.