labor What Is Fight For $15? Minimum Wage Protests Planned Across US, Here's How You Can Join In

Uber drivers, airport workers, homecare, childcare, fast food workers and others will strike tomorrow in cities across the country, demanding a higher minimum wage and the right to a union. 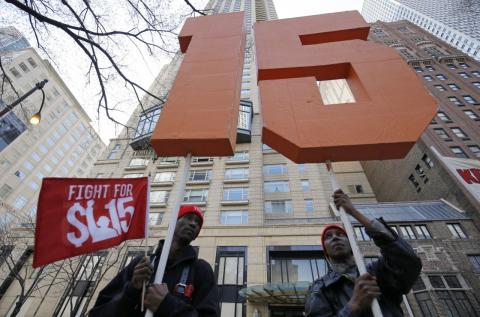 Minimum wage advocacy group Fight for $15 is planning mass protests in airports, fast food restaurants and city centers across the U.S. on Tuesday., IBT Times.
The minimum wage advocacy group known as the Fight for $15—as in a $15 minimum wage—has called for a “national day of disruption” in 340 cities across 29 states and the District of Columbia on Tuesday, in which home care, childcare, fast food and airport workers will simply stop working.
“Americans are united around our desire for a better future for our kids and an economy that works for everyone, not just those at the top,” Fight for $15 striker and McDonald’s worker Betty Douglas was quoted as saying in a post about the event on the group’s website. Douglas, who makes $7.90 an hour after working for the fast food restaurant for eight years, added that Fight for $15 “won’t back down until the economy is fixed for all workers and we win justice for all people in our nation.”
The strike, the group says, will hit airports in 19 cities and include a “mass civil disobedience in front of McDonald’s restaurants from Detroit to Denver.” On Facebook, affiliated groups posted plans for coordinated protests at Zuccotti Park in New York City, the Hartsfield-Jackson Airport and Ponce de Leon Avenue in Atlanta and two McDonald’s restaurants in Hartford, Connecticut. For those who want to join the protests, Fight for $15 says it will email more information to potential participants on demonstrations happening nearby after they submit their names and contact information to the group’s website. The list of cities set for the nationwide protest, which the group sent International Business Times in an email, included areas as small as Homestead, Pennsylvania, which has a population of just over 3,000, and as large as New York City, which is more than 8.4 million-strong.
The upcoming demonstrations are set to follow Nov. 10 protests in which minimum wage workers in 270 cities were expected to walk out on their jobs. Fight for $15 held a similar “day of action” in April.
Economists, workers and business leaders have long debated the merits of an increase in the minimum wage, the inflation-adjusted value of which peaked in 1968, according to the Pew Research Center. Proponents like Fight for $15 argue that anything below the target of the group’s namesake simply isn’t livable. Those against the hike worry that if companies face higher production costs in the form of more expensive labor, they’ll be forced to lay off workers, and that many of the workers who would be either let go or paid more would be teenagers still supported by their families, not adults with families to feed. According to the latest data on minimum wage workers from the Bureau of Labor Statistics, 2.6 million, or 3.3 percent of all hourly paid workers, earned a wage less than or equal to the federal minimum, and half of them were under the age of 25.
Voters in Arizona, Colorado, Maine and Washington chose to give their lowest-paid workers a raise on Nov. 8, with the former three states pushing the minimum to $12 by 2020 and the latter raising it to $13.50 over the same period. A vast majority of South Dakota voters also blocked a measure that would reduce its statewide minimum. The federal minimum of $7.25 is effective in 21 states.