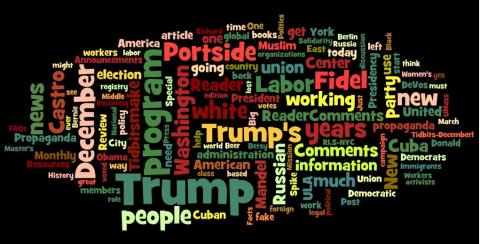 Tidbits - Reader Comments, Resources and Announcements - December 1, 2016, Portside
Resources:
Announcements:
Fight for $15 - We Won't Back Down
Yesterday, in 340 cities across the country, we put it all on the line - and hundreds of us were arrested. We made it clearer than ever:
We. Won't. Back. Down. 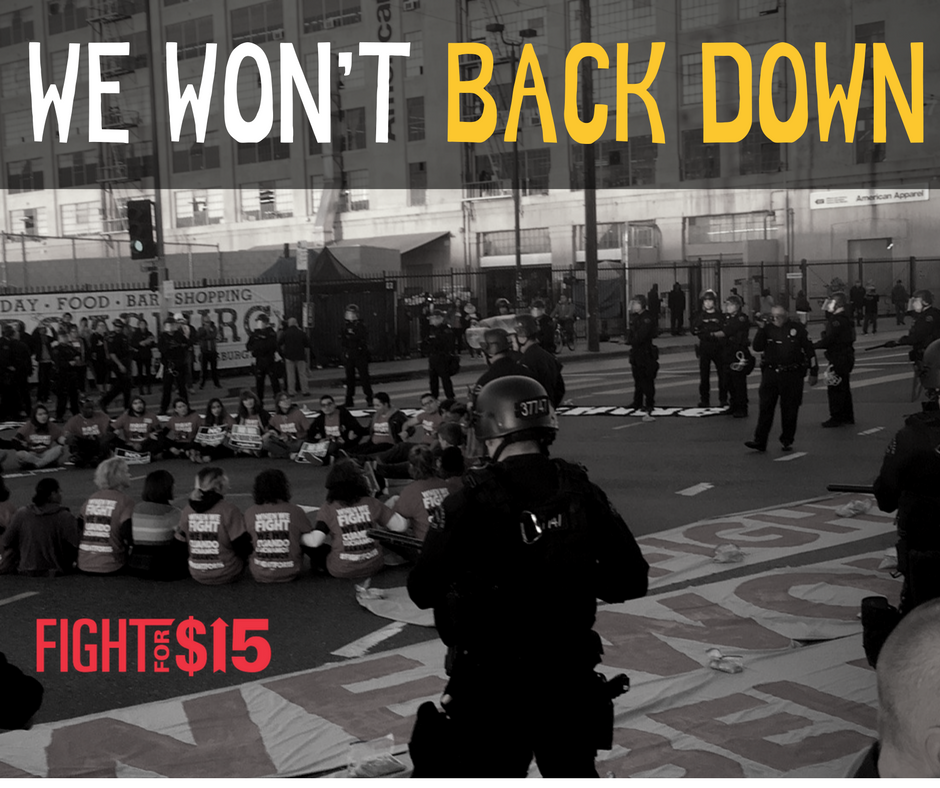 Workers are taking a stand against low pay. Stand with us by adding your name to our petition today: www.fightfor15.org
Get the latest updates, breaking news by clicking here.
Hasta la victoria. Siempre. 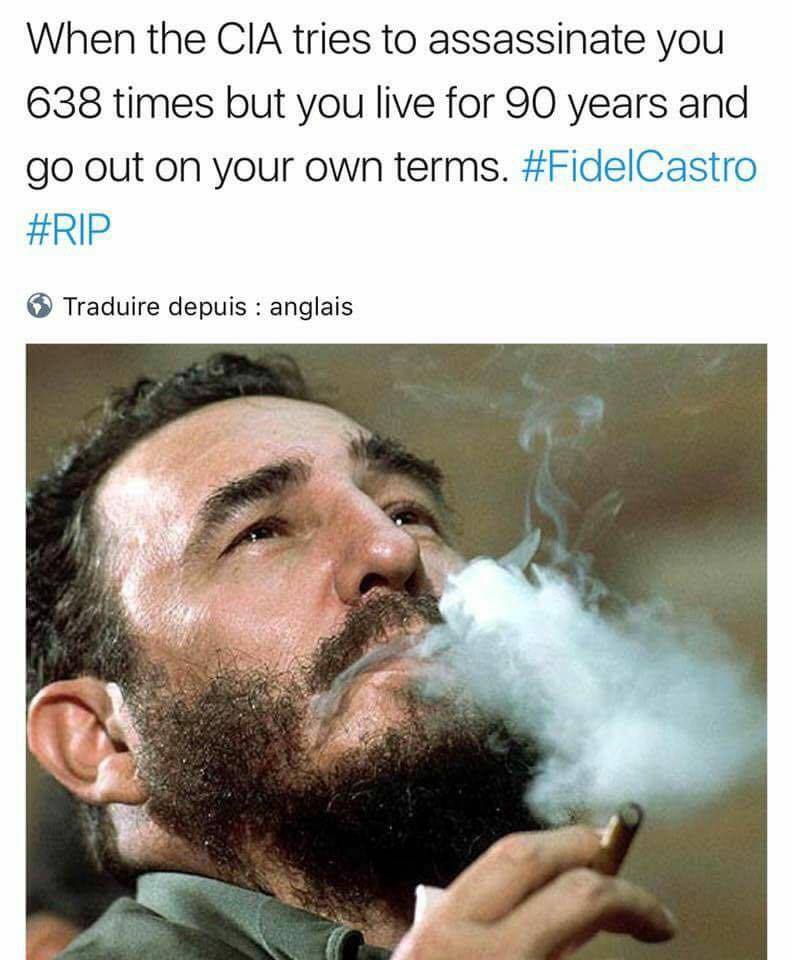 Re: Fidel Castro Obituary
Thanks for this.  We were on the 1964 student trip to fight the travel ban.  Fidel played baseball with us, had to pitch for both sides as we had  no good pitchers.  I met my husband on that trip.  He was born on  Fidel's birthday, and died this year too.  What a terrible year, and  possible terrible 2 to 4 years for this country and the world coming.
Thanks for your work.
Anne Johnson
Granma Special edition 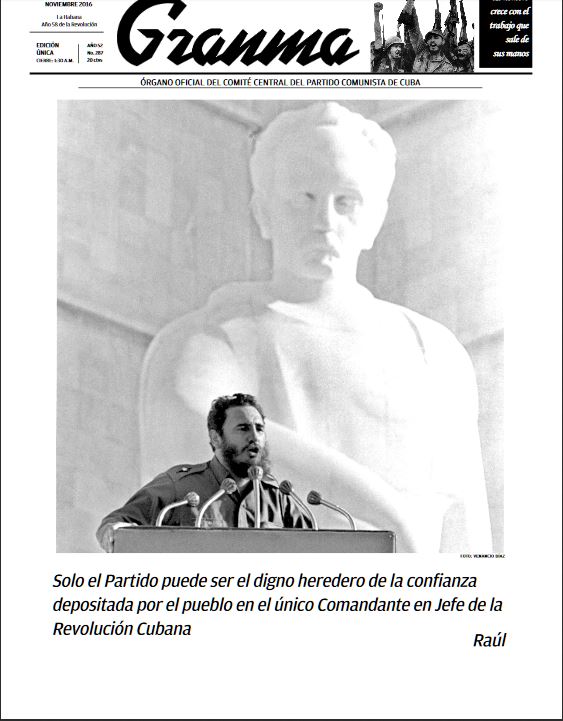 Today's GRANMA, the print edition
For Fidel...Gather at CUBAN MISSION Sunday, DECEMBER 4
Sisters and Brothers:
Cuba Solidarity forces will gather Sunday, December 4 from 3:00-5:00 PM at the Cuban Mission to the United Nations, 315 Lexington Avenue (between 39th and 38th Streets in Manhattan) to honor the life and memory of our dear brother Fidel Castro.
This is the day Fidel's remains will be buried in Santiago de Cuba.
From Monday, November 28 through Sunday, December 4 (9:00 AM - 1:00 PM and 3:00 - 6:00 PM daily), there will be a Condolence Book at the Cuban Mission that will be available for people to sign. (A photo ID is needed to enter the Cuban Mission)
CubaSi! cubasi@googlegroups.com
Re: Fidel Castro - The Voice of the Third World
In Africa, Cuba's first support went to Algerian freedom fighters. See Conflicting Missions: Havana, Washington and Africa,1959-1976, by Piero Gleijeses.
Mike Munk
Re: Unity, the Best Tribute
He was a lover of Palestine, God rest his soul.
Ragda Mohammed
Posted on Portside's Facebook page
Re: To Resist a Trump Presidency, Ask: "What Would the Abolitionists Do?"
Thank god for the perseverance of the abolitionists--and these lessons of history. I found this piece from the Washington post quite inspiring.
Jan Haaken
Re: The "Women's March on Washington," Explained
Let's merge!! In Washington, Berlin and everywhere!
Progressive Democrats Abroad Germany - Berlin Chapter
Posted on Portside's Facebook page
President Obama: Prevent Trump's Muslim Registry
Petition by DRUM (Desis Rising Up and Moving) 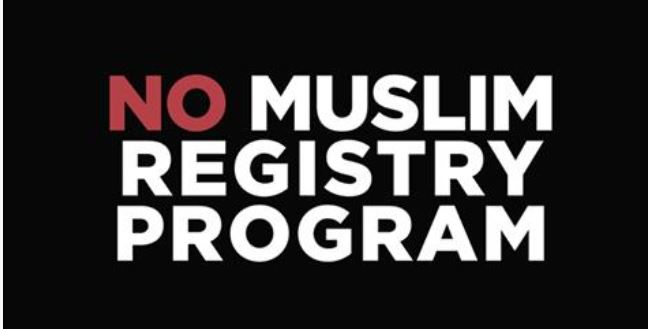 President Obama must immediately revoke the regulatory framework of the Bush-era registry program called National Security Entry-Exit Registration System (NSEERS), which predominantly targeted Muslim immigrants based on their countries of origin. In the hands of Donald Trump, this program can potentially be used to target, register, and deport Muslims--on a much larger scale than previously implemented. This is the moment to shut this program down once and for all and to resist any new effort.
HOW DO WE COUNTER THE MUSLIM REGISTRATIONS?
As an organization that led the NYC efforts against NSEERS Special Registration in the aftermath of 9/11, lost hundreds of members to subsequent deportations, and still have members who survived, we know that we cannot wait till the new administration is in power to fight back.
Instead of waiting to see if a Muslim registry is re-instituted, we demand President Obama revoke the still existing regulatory & administrative framework of the existing registry program. We've already seen the damage NSEERS caused and the huge failure that it was. We can't hand this program to Donald Trump or his administration.
President Obama has the power to do this!
If Donald Trump wants to start a registry program that predominately targets Muslims, let him start from scratch. Our job will always be to resist his efforts. But we need an upper hand going into this fight and this is one way to get there.
#WeWillNotSubmitWeWillNotComply
#CedeNoGround
#Here2StayHere2Fight
Steve Bannon selected as Minister of Propaganda - Cartoon by Katie Miranda 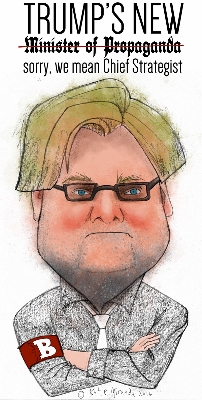 I am writing to share a new community resource: www.InformedImmigrant.com. Created by several organizations, including Asian Americans Advancing Justice - AAJC, Center for Community Change, FWD.us, National Immigration Law Center, SEIU, United We Dream and others, InformedImmigrant.com features guidance in the form of Frequently Asked Questions (FAQs) and legal resources to help immigrants and their families during these uncertain times. The site will be continuously updated with additional guidance and information as it becomes available.
What you'll find:
- Legal information/FAQs in English & Spanish;
- A list of over 600 immigrant rights/immigrant-serving organizations and their donation links for when allies are looking for places to volunteer/donate;
- A legal resource pdf with known and regularly used legal services look up tools;
- Know your rights materials.
How you can help:
- If you notice missing organizations, please submit in the form at the top of the organizations page.
- If you are getting frequently asked questions from community members that are not addressed, please let us know.
Coming soon:
- know your rights video tutorials
- full site in Spanish & Korean
- toolkit on creating healing spaces tool-kit from UWD
Click here to share InformedImmigrant.com to help immigrants and their families find the information they need in this critical moment. 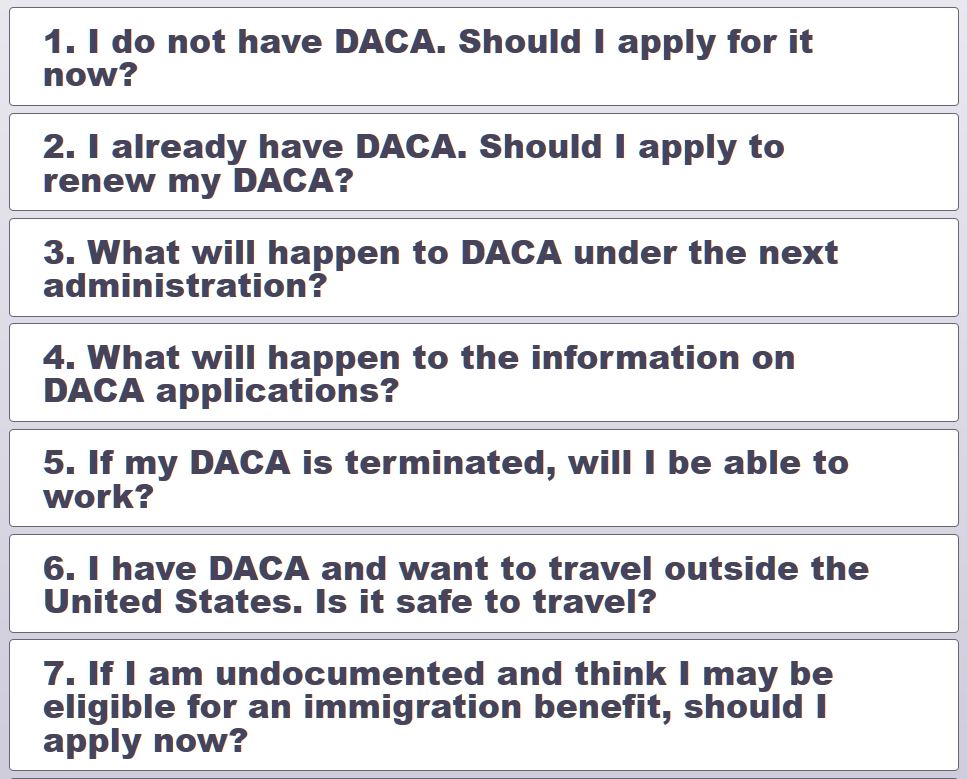 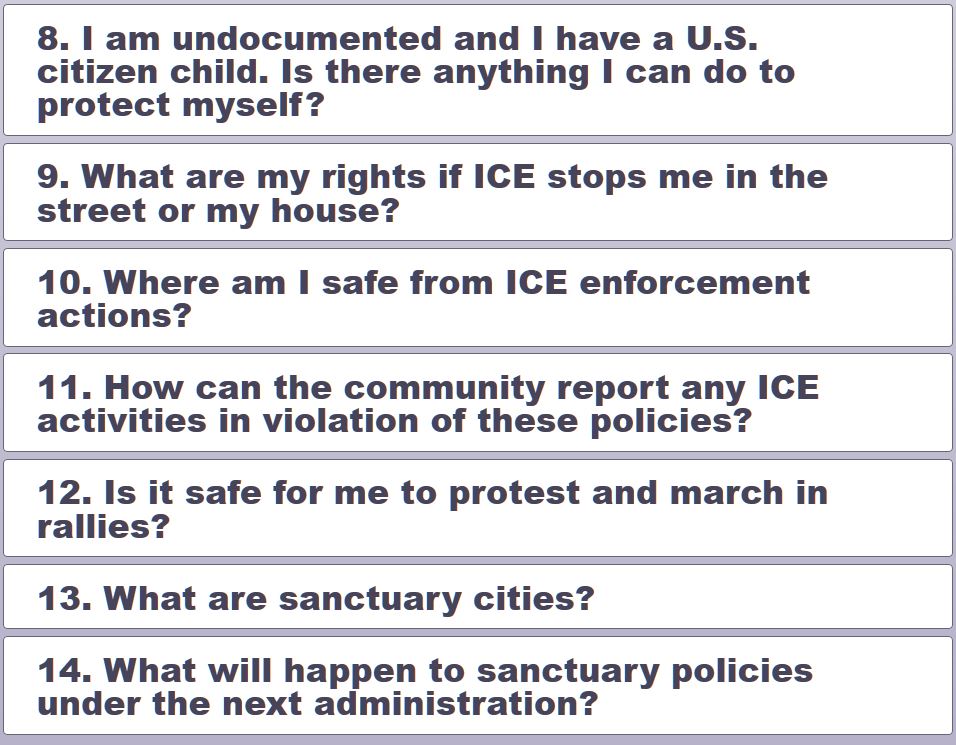 These FAQs provide information and recommendations that may help you prepare once President-elect Donald Trump takes office on January 20, 2017. The information in this based on what we know today. We will continue to update it with more information once we have it.
Please note that the information in this FAQ is not legal advice. Every person's situation is different, and you should talk to a qualified immigration lawyer or a Board of Immigration Appeals (BIA)-accredited representative so that you can make the most informed decision for yourself.
Have FAQ suggestions? Email us via info@informedimmigrant.com
Read FAQs in Spanish / Leer FAQs en español
Site translation in Korean coming soon
Avideh Moussavian,
Policy Attorney
National Immigration Law Center
1121 14th Street NW, Suite 200
Washington, D.C. 20005
Phone: (202) 621-1031
Email: moussavian@nilc.org
Monthly Review Celebrates Fidel Castro and Cuban History - 30% Off Special Offer until December 9 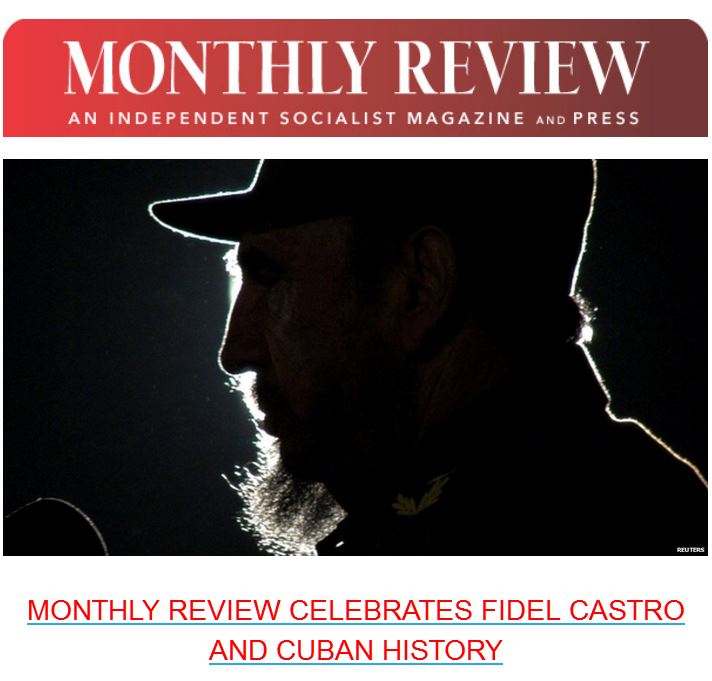 Monthly Review and Monthly Review Press are proud to salute the life and legacy of our longtime friend, Fidel Castro. Our 1960 special edition of Monthly Review, "Cuba: Anatomy of a Revolution,"  was one of the earliest reports on the fledgling revolution, and in the intervening years, we've published dozens of articles and books on Cuba. For those who would like to learn more about Cuba, Fidel's revolution, and this amazing history, Monthly Review Press is offering a 30% discount on six of our recent books about Cuba, from now until midnight, Friday, December 9.
Please note that this discount applies only to paperback and eBbook versions, except for One Day in December, which is available only as a hardcover and eBbook. Just click on the cover images below for book descriptions. When ordering, enter the coupon code 201611fidelpresente at checkout to receive 30% off. 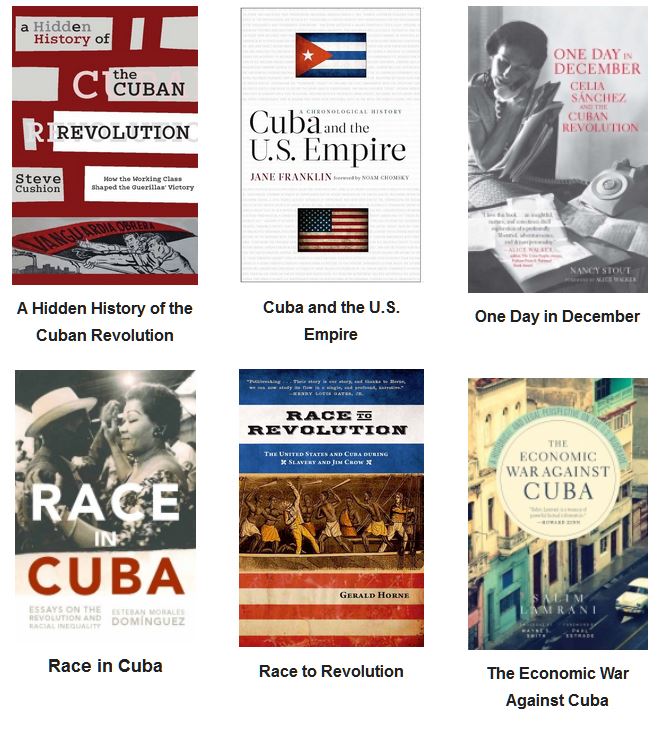 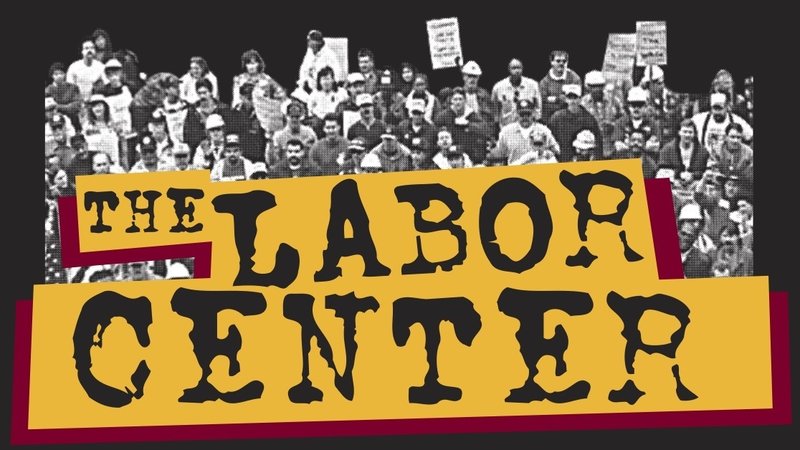 The UMass Amherst Labor Center is announcing an exciting new scholarship program for their limited residency Master's degree program in Labor Studies (ULA). Designed for union officers, staff and activists, participants attend 5 ten-day sessions held in January and July and receive their Master's degree in three years. Click here for more information about the program.
This new scholarship program will cover the tuition costs for up to ten (10) new students to start in the ULA session January 8-18, 2017. Students would only need to cover their travel and a meal/facility charge.
Want to apply? Find out more here.
ULA: The Master's Degree Program for people with full-time jobs
The Union Leadership and Administration (ULA) program is an innovative limited-residency Master's degree program in Labor Studies at the University of Massachusetts Amherst, designed for union members, officers, staff, and activists who work full-time. Our students come from all over the U.S. and Canada.
Courses are taught during ten-day residencies in January and July. Participants take two intensive three-credit courses during each session, complete writing assignments at home in consultation with the faculty, and finish the degree in three years. Experienced trade unionists and activists are enrolled in the program, creating intellectual stimulation, camaraderie and solidarity. Our faculty members are respected scholars in their fields, and have union experience that allows them to create courses that are both academically strong and practically based.
The only non-residential graduate program in Labor Studies of its kind, the ULA program offers working people and unionists the opportunity to study and explore the labor movement - where we've been, where we are today, and where we need to be. The program provides the leadership and skills necessary for today's union officers, staff, and activists to confront the changing world and to make our unions prosper and grow.
UMass Amherst Labor Center
Thompson Hall, 200 Hicks Way
Amherst, MA 01003-9277
tel: (413) 545 4875 -- fax: (413) 545 3204
A TRUMP WORLD ORDER? - What to Expect from US Foreign Policy - New York City - December 9 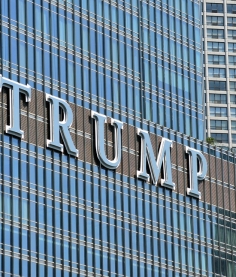 With Medea Benjamin, Vijay Prashad, Jillian Schwedler, and Ingar Solty
Friday, December 9, 2016 -- 4-7pm, with reception following
The Asian American Writers' Workshop
110-112 W. 27th Street - Sixth Floor
New York City
Free and open to the public. RSVP here.
Donald Trump's shocking election victory presents itself not only as a national catastrophe for the American people, but as a threat to the entire globe. On December 9, RLS-NYC will host a panel discussion on future President Trump's impact in the global arena. Focusing on different regions, we will look at what to expect in terms of strategic alliances, shifting partnerships, conflict resolution, multilateralism, environmental policies, and more.
All around the globe, the news of Trump's triumph has provoked distress. While Trump's views on foreign policy are usually described as ill-informed and plagued with contradictions, he has consistently supported a global role for the United States completely different from the bipartisan consensus that has dominated US foreign policy for at least 60 years.
This panel will bring together international and American experts who will try to explain how the new administration might reshape the current world order, and what the progressive global community should expect in coming years.
Medea Benjamin will lead the discussion, providing an overview on the potentially radical shifts expected in US foreign policy. Ingar Solty will then discuss impacts on Europe. Jillian Schwedler will tackle the challenges facing the Middle East under this new administration, and Vijay Prashad will close by analyzing the implications of a Trump presidency for the global South. Afterwards, the speakers will sit together for a more open-ended discussion of US foreign policy under Trump.
Triggered by the unpredictability of a Trump administration, this event will seek to offer a peek toward the deeply difficult years ahead of us. It will also try to provide tools to help us make sense of the world we live in and to understand how the struggle for a new system of global governance is more relevant today than ever.
Speakers:
Free and open to the public. RSVP here.