Now, after the wave of new protests in the late Obama era, the Sanders campaign, and the post-primary mess that resulted in the election of Trump, there are signs of a new direction. As the shock of November 8 drives a turn toward left politics, many new converts are looking for orientation and training. The left has plenty of passion, but lacks a coherent organizing strategy or analysis of how power is defined by social relations from top to bottom. 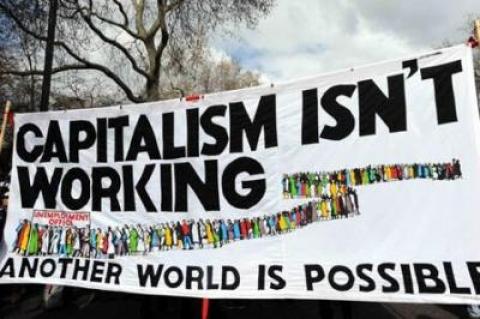 All political tendencies are caught in a whirlpool since the election, but none more so than the left. It lacks any recognizable center, despite the meteoric rise of Bernie Sanders. It appears in and around the Democratic Party in unconnected, isolated circumstances, fragments of the population. Not only are the fragments disconnected from one another, they also suffer from isolation from the previous generation, which in turn had lost touch with its own predecessor.

History has been unkind to the American left. A hundred years ago, the movement was plagued with “infantile sickness,” an inability to recognize setbacks that could basically be equated with diseases in babies, like colic. By comparison, today’s left grapples with dissociative identity disorder, multiple warring personalities, just when it needs more than ever to focus on politics.

For those motivated by self-preservation, everyone else is suspect. Then, those radicalized upon discovering the harsh limits to advancement for their particular demographic expect everyone else to join their fight. Justified grievances become moral tests. Groups form protective subcultures that grow ever more enclosed and self-referential, and self-righteous in their approach to the rest of society. Club rules take precedence over politics. Language and etiquette become more important than working out effective strategies and organizing skills. Wagons are circled against transgressions that are seen as outright attacks―or more precisely, sins. The culture of “calling out” and fetishizing marginalization creates the left’s “secret identity” as a suicide squad that reproduces its own powerlessness.

The safety pin controversy has become “a thing” since the 2016 election. It captures what I’m trying to describe. After Trump’s victory, amidst a sharp increase in hate crimes and racial and sexual harassment, social media began promoting wearing a safety pin as a symbol of empathy and willingness to help when things get dangerous in everyday situations.

As mostly white, mostly younger liberals and radicals started pinning up, a counter-push appeared online. What the hell is a safety pin good for? How does that deal with a racist demagogue running the country, with followers seething with bitterness, getting carte blanche (very blanche) to inflict pain? Does a safety pin help, or is it just a way to feel better about losing the election?

A lot of irony here. Both sides have a case. The debate won’t be reconciled, and will disappear like New Coke, pet rocks and other fads of bygone days. But even as it plays out, neither side seems to grasp that it has no effect or sheds any light on the power relations that give rise to the problem of violent backlash in the first place.

This is nothing new―it’s been characteristic of the left for decades. It’s not really sectarianism, the scourge that periodically (1919, the 1930s, 1968) plagues emerging groups trying to reinvent revolution. Rather, this is a cultural phenomenon that is part of the quest for safe spaces by newly radicalized individuals with no political home to call their own. On a personal or social level, who doesn’t wish for a safe space? Who doesn’t want to deal only with open-minded, sympathetic people? We all want to be understood, and live in safety and security. This is an entirely understandable initial response to oppression, alienation, and other intolerable conditions of life as we have known it. That’s why there’s religion.

The problem is when this search for an island of solidarity and safety actually defines the left. The left lacks a “vision”―though most identify with socialism, there is little understanding of socialist history or theory. It lacks coordinated organization―there is no national group with a mass base, although some left-leaning groups and unions have numbers and influence in particular constituencies. There is no media center that either speaks to or transmits the views of the scattered pockets of organizing and unrest. Meanwhile, secondary education discourages viewing society as a collective effort, and prepares young people to grow into a fixed hierarchy of ownership and servitude.

In response, radicals more often seek solace than power. In their own grooves, they comfort each other and lash out at critics. They pride themselves for moral superiority over the rulers, and will even stand in judgment over those who are ruled. They create a setting where affinity of a few is substituted for mass political action (taken not by thousands, but millions) as the engine of social change.

Now, after the wave of new protests in the late Obama era, the Sanders campaign, and the post-primary mess that resulted in the election of Trump, there are signs of a new direction. As the shock of November 8 drives a turn toward left politics, many new converts are looking for orientation and training. But patterns of moral grandstanding, romanticizing “the struggle,” and sectarian posturing have staying power. The left has plenty of passion, but lacks a coherent organizing strategy or analysis of how power is defined by social relations from top to bottom. The prevailing understanding of class puts the concept as one among many forms of injustice, rather than the basic structure of capitalist society.

Some aspects of this problem can be traced to the turn away from history, towards various eureka moments from cultural studies: hierarchies of oppression; fetishizing class status, race, gender, and ideological “identities” as political in themselves; and fixation on academic sandbox fights divorced from non-campus life and standing above politics in general.

The rise of the far right through populist appeals to xenophobia, economic insecurity, and entrenched race and gender power relations is mirrored by the inability to build the left as a political force. The solutions are not simple or easy. There are demands that need to be made of every part of the broader left, while also insisting that each part be heard and understood by the others.

There is no possible way to isolate the right without directly addressing the reassertion of white supremacy in the society on every level. There is no way, in turn, to make any sense to any section of the general public without acknowledging the failure of past administrations to put the needs of working people ahead of corporate profits.

Rote formulas for party building, whether cadre-model or de-centered, multi-tendency campaigns, end up mired in sectarianism or frustration. A party that can effectively vie for power will not come from a small group planting an acorn, or from a slapped-together laundry list of demands and signatures.

The actual form a national opposition will take is more likely to be determined by the ways social movement activists move towards serious politics working through existing institutions, while developing new projects with their own character, testing the boundaries of the acceptable and respectable.

This is asking a lot. But it is achievable. The left’s orientation is dominated by speaking truth to power and mobilizing, in our separate, isolated corners. In that context, the secret identity left flourishes. The focus needs to shift to speaking truth to the powerless, organizing, and making strategizing and analysis into democratic practices. This means that organizers, tacticians, and leaders have to find a common orientation of convergence and coordination. Instead of scattered crusades and martyrdom, we need to rediscover, with twenty-first-century eyes, the most powerful weapon against capitalism produced in the last century―the united front. Working together to de-fragment and re-focus the political left in and around the social movements, with mutual respect and shared awareness of how much is at stake. The strategic goal is to stabilize and build the political left, hold back the rightward drift, and isolate and crush the far right―in that order. In broad unity but not monolithic or mechanical in our thinking or approach.

In the land of opportunity there is plenty of room for opportunism, but the road to disempowering plutocracy is made by walking, through democratic practice and democratic empowerment. Not backward to a golden age but the negation of a failed system.

From a collection of articles published by Rosa Luxemburg Stiftung New York Office, downloadable as a pdf: http://www.rosalux-nyc.org/wp-content/files_mf/trumpandtheriseofthenati…