The right is on the march — but not without resistance 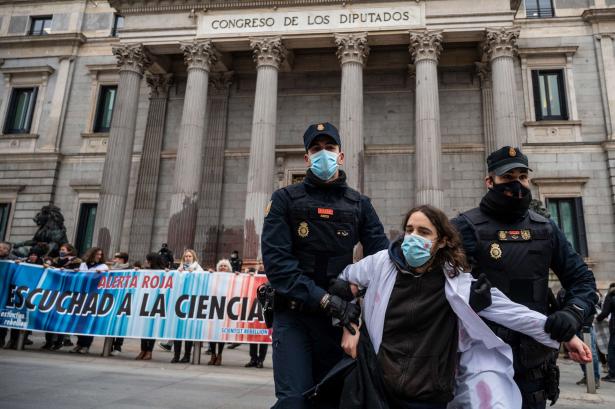 Police officers remove a climate activist of the Scientist Rebellion group from a protest in front of the Congress of Deputies in Madrid, Spain, on April 6, 2022. Credit,Marcos Del Mazo / Lightrocket via Getty Images

Libraries are widely beloved in America, but they’ve been decimated by austerity in recent years. Emily Drabinski is a socialist librarian who is running for head of the American Library Association to change that.

The War and US Evangelicals
By Melani McAlister
The Conversation

A significant subset of the U.S. evangelical community, particularly white conservatives, has been developing a political and emotional alliance with Russia for almost 20 years. Now, small group of the most conservative American evangelicals cannot quite break up with their long-term ally.

On Staten Island, it made all the difference that the union was independent and led by workers from the warehouse, not managed by a large, outside organization.

Oscars After #MeToo
By Catherine Shoard
The Guardian

The most generous possible reading of Chris Rock’s joke about Jada Pinkett Smith, is that he simply finds the idea of a woman having short hair hilarious. His preceding gag concerned the domestic nightmare which would await poor Javier Bardem should he win best actor but his missus, Penélope Cruz, fail to bag best actress. You know what women are like!

More than 1,000 scientists across the globe chained themselves to the doors of oil-friendly banks, blocked bridges, and occupied the steps of government buildings on Wednesday to send an urgent message to the international community: The ecological crisis is accelerating, and only a “climate revolution” will be enough to avert catastrophe.

After the passage of the “Don't Say Gay” bill, a lawsuit has been filed on behalf of students, parents, a teacher, and the LGBTQ rights group Equality Florida. The lawsuit states, “This effort to control young minds through state censorship — and to demean LGBTQ lives by denying their reality — is a grave abuse of power.”

Though the Buckley Program has only existed since 2010, the arguments that animate its work have been at the core of conservative politics for over half a century. An organization that claims to be a space for students to “engage in intellectually open and respectful dialogue and to hear all sides of issues” ended its annual conference with a call for government censorship.

Teachers Are Being Crucified
By Dina Ley
Medium

Teachers are leaving the classroom for a multitude of reasons. Prior to the pandemic, the system was already very much broken, but teachers were able to hold all the pieces together, often at the expense of their own families, their own mental health, and their own personal lives. Teaching was martyrdom for the greater societal good.

The Left and Putin
By Ben Adler
Yahoo News

Putin, an authoritarian nationalist who has enacted laws targeting LGBTQ people and jailed liberal dissidents, has never been lionized on the left. But a cadre of far-left activists and pundits argue that the U.S. risked provoking confrontation with Russia by expanding NATO to its borders. Some are opposed to giving military aid to Ukraine or imposing economic sanctions on Russia.