The secretary of labor isn’t exactly the sexiest job in the government. But president-elect Donald Trump’s pick of Andy Puzder, a fast-food restaurant CEO, could have profound effects that touch millions of U.S. workers and companies almost immediately. 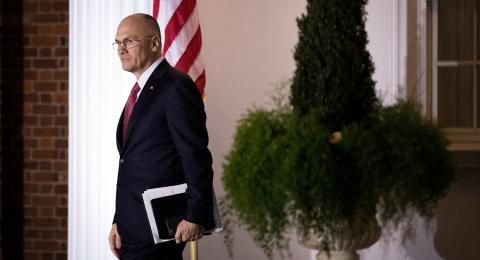 The secretary of labor isn’t exactly the sexiest job in the government. Labor secretaries don’t have widespread name recognition, and the post gets nowhere near the attention of marquee jobs like attorney general or defense secretary. The Department isn’t especially large, with a budget of less than $20 billion—a rounding error in the $3.5 trillion federal budget—and fewer than 20,000 employees, less than a fifth of the Justice Department’s workforce.

But president-elect Donald Trump’s pick of Andy Puzder, a fast-food restaurant CEO, could have profound effects that touch millions of U.S. workers and companies almost immediately. The Obama administration has already wielded the power of the Department of Labor to push through huge changes in the American workplace, cracking down on wage theft and slowly shifting how the U.S. trains workers. Many of the changes, such as to unemployment insurance or job training, aren’t visible to most Americans, and the shifts happen over years and decades, not weeks and months. But the changes are real, and they don’t require congressional approval.

Puzder’s power would be expansive, touching on every corner of the economy. Politicians rarely talk about the levers the labor secretary can pull; they may be buried within obscure sub-agencies or set in bureaucratic directives that never receive national attention. But the decisions and priorities of the labor secretary—from overseeing jobless benefits to administering visa programs to enforcing labor laws—filter down through the department, affecting state and local workforce agencies and the 150 million workers in the United States.

Under Obama and current Labor Secretary Tom Perez, the administration has enthusiastically used its scattered authorities to crack down on wage theft, pressure states to modernize their unemployment insurance programs and support apprenticeship programs across the country. Labor unions and liberals have cheered these efforts; conservatives and employers, including Puzder, say such interference ultimately reduces growth and hurts workers.

What could happen under a Labor Secretary Andy Puzder? He runs CKE Restaurants, which owns Carl’s Jr. and Hardee’s, and he’s on the record as opposing significant increases in the minimum wage and Obama’s overtime rule. POLITICO talked with labor market experts and former DOL officials to get a sense of how he can use the department’s lesser-known powers to dramatically change the labor market.

If confirmed, Puzder and his staff will have the authority to not just roll back Obama-era rules but to entirely revamp how the Department of Labor oversees the economy, shifting resources and reprioritizing agencies. For instance, Puzder is likely to modify two guidance documents from the DOL’s Wage and Hour Division, which enforces federal labor laws, issued in the past two years. The first provided an expansive definition of who is an employee—and thus covered by federal labor laws—and who is an independent contractor. The second also offered an expansive definition for “joint employment,” the controversial issue about whether two employers are responsible for complying with the law with respect to a particular worker. Such an interpretation is particularly important for fast-food CEOs like Puzder who sell franchises; a more expansive definition makes the parent company (like CKE Restaurants, or McDonald’s) jointly responsible with the franchise owner for adhering to labor laws—and also jointly liable for any violations. This was a big deal for franchise companies when it was issued earlier this year; worker rights groups cheered the directive because it put the onus on influential national companies, not just local franchisees, to comply carefully with labor laws. Critics said it was another aspect of Obama’s “war on franchises.” Puzder, of course, runs one of the affected parent companies, though he hasn’t taken a public stand on the guidance.

Though these guidance documents carry less force than official regulations, they have a significant effect on workers because they are a signal to employers for how the Wage and Hour Division intends to enforce the law. Whether such interpretation would stand up in court is unclear, but many employers don’t want to take the risk and find out, so they adjust their workplace rules accordingly.

“People in the overseen or regulated communities take those documents very, very, very seriously because it’s an indication of the approach the department is going to take to a particular issue,” said Seth Harris, the former deputy secretary of labor in the Obama administration. “And they are guidance for that purpose, to get people to change their behavior.”

Under Obama, the Wage and Hour Division has also been very active in enforcing labor laws: Since 2009, the agency has sued companies to collect nearly $2 billion in back wages for American workers. It has also shifted resources to investigate industries and workplaces with a history of labor law violations. A separate agency is responsible for investigating employers to ensure that employees have safe and healthy working conditions. Such investigations have been a boon for workers, but employers have complained about intrusion into their businesses. Puzder could unilaterally slow down the enforcement regime, conducting fewer investigations, seeking smaller settlements with employers who violate the law and requesting smaller budgets from Congress. “Enforcement is a big deal,” said Ross Eisenbrey, vice president at the left-leaning Economic Policy Institute. “I consider it the most important thing that DOL does.”

If Congress spends less money on enforcing the labor laws, it could shift resources to the Office of Labor-Management Standards, which enforces union disclosure requirements. In other words, the department could go after unions more aggressively than after employers. The office peaked in strength, in terms of number of employees, during the George W. Bush administration, and its workforce has fallen by 50 percent since. Puzder, who has ties to anti-union groups, could revamp the office to increase oversight of union finances.

The Labor Department also dishes out billions of dollars through various programs, including job training, unemployment insurance and worker’s compensation. Some of these programs have very specific rules, giving DOL little influence in how the money is spent. But in other cases, it has the flexibility to use the money to pursue different policy goals. For instance, the Obama administration has used competitive grant programs to encourage states to revamp their unemployment insurance programs, offering billions of dollars to states to modernize their eligibility rules and funding sources. The U.S. unemployment insurance system is still plagued with many problems, but the Obama administration’s efforts have made UI available to thousands more workers. Puzder could reverse these priorities, focusing less on modernizing the program and expanding eligibility and more on combatting fraud among beneficiaries.

Similarly, on job training programs, Perez has used federal resources to encourage states to set up and expand apprenticeship programs, with the goal of helping workers learn valued skills on the job instead of learning them without pay. Most workers are unlikely to notice these efforts, but over the long term they could dramatically change how workers find jobs and employers find workers. But Puzder, if he chooses, could scale back these investments and focus resources elsewhere, such as in traditional job training or job placement programs.

Another major power housed within the Department of Labor has to do with immigration: it administers three controversial guest worker programs, which allow foreign nationals to come to America and wok on a temporary basis. The Department is also responsible for enforcing immigration laws in the workplace, which includes ensuring employers do not exploit undocumented workers—potentially a significant lever in building a new, tougher immigration regime.

The Labor Department’s immigration powers explain why there’s already been blowback against the Puzder pick from the immigration hardliners who support Trump: he has expressed past support for immigration reform and praised immigrant workers as necessary and hardworking; critics are sounding the alarm that he’ll betray Trump’s campaign promises by loosening up on workplace-based immigration enforcement, and might even push for a less strict immigration policy throughout the administration.

That makes Puzder the rare Trump pick who’s drawn concern from both the left—who worry he’ll gut workplace protections—and the immigration right. While the left is sure to oppose his nomination, it’s unclear whether enough Republican senators will join them. But that the nomination has provoked such bipartisan outrage is a testament to just how much power resides in one small department.