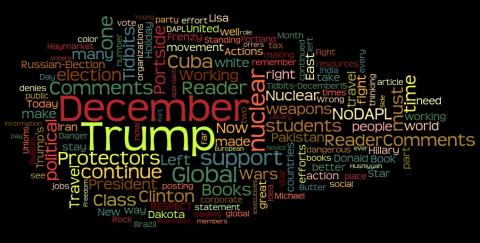 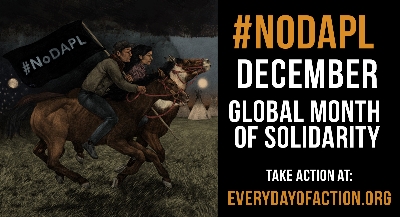 The Army Corps of Engineers did not grant the final easement to drill under the Missouri River. You can read the Army Corps' full statement here.
As a result, many will leave, but some will stay. The Global Solidarity Campaign stands firmly with our Protectors and relatives that will continue to stay on the frontlines. We will continue to funnel support directly to the Protectors, in addition to mobilizing the world to take action.
We are NOT asking folks to go to camp at this time, but we are asking for your continued support of our Protectors staying on the frontlines. Donating to the Last Real Indians #NoDAPL Aid fundraiser is the number one way to get monetary support directly to the Protectors for yurts, 4WD Pickups, snowmobiles, the rebuilding of kitchens, porta potties and any other winterization needs the Protectors deem necessary:
We want to stress that this fight is not over. We have successfully halted DAPL administratively, but need to continue to fight on all fronts. In addition to sending monetary and supply support to our front line Protectors, we must stop financial resources from flowing into DAPL.
December is a Global Month of Action. During this time we ask all of our supporters to continue to personally divest from the 17 banks who fund DAPL, and take direct action to shut these banks down. Here are historically, culturally and strategically significant dates to take action:
December 15 - Anniversary of Sitting Bull's Assassination (Dec 15, 1890)
December 22 - North Dakota's violations of the UN Declaration of Universal Human Rights and Declaration of the Rights of Indigenous Peoples- Tell Morton Co and all Sheriff's Departments to stand down!
December 25 - Global Day of Prayer
December 26 - Date of the Dakota 38 Hanging ( Dec 26, 1862)
December and the remaining winter months are very critical months to stay engaged and stay active, not only because the threat of DAPL's continued presence at Standing Rock, but this timeframe has historical significance as well.  The many attacks by the United States Government and military on our People, all took place in the winter. At a time when our resources are at their lowest, when our numbers are at our lowest and our ability to protect ourselves is at our lowest.
Lynette Two Bulls, Executive Director of Yellow Bird and Co-Founder of the Annual Fort Robinson Outbreak Spiritual Run stated it best, when she said, "The atrocities that took place against our people all happened in the coldest times of winter. It was strategic, but what was not realized is that we are strong, we carry the wisdom of the universe, the strength of our ancestors, we are part of the stars, we are caretakers of Mother Earth. Today we remember the sacrifice of our ancestors through commemorative rides with horses, runs, walks, not to stay in trauma but to heal, to remind ourselves of our connection to the universe, our resilience, to remind us of faith, love and hope, and to remind the world of that "dangerous thinking". Today we remember Sand Creek, Dakota 38, Wounded Knee, Fort Robinson, and the many others. Today we Stand with Standing Rock."
This is why it is so important that we continue to organize, continue to show support and show up for those risking their lives on the frontlines of Standing Rock and those organizing to heal from the historical trauma. We give a heartfelt thank you to each and every one of you for standing with us and continue to do so as we continue this longstanding fight.
In Blessings & Gratitude,
- #NoDAPL Global Solidarity Team
*Please visit these websites for more guidance and direction for your continued support:
100 US Institutions and Travel Organizers Found RESPECT (Responsible and Ethical Cuba Travel) 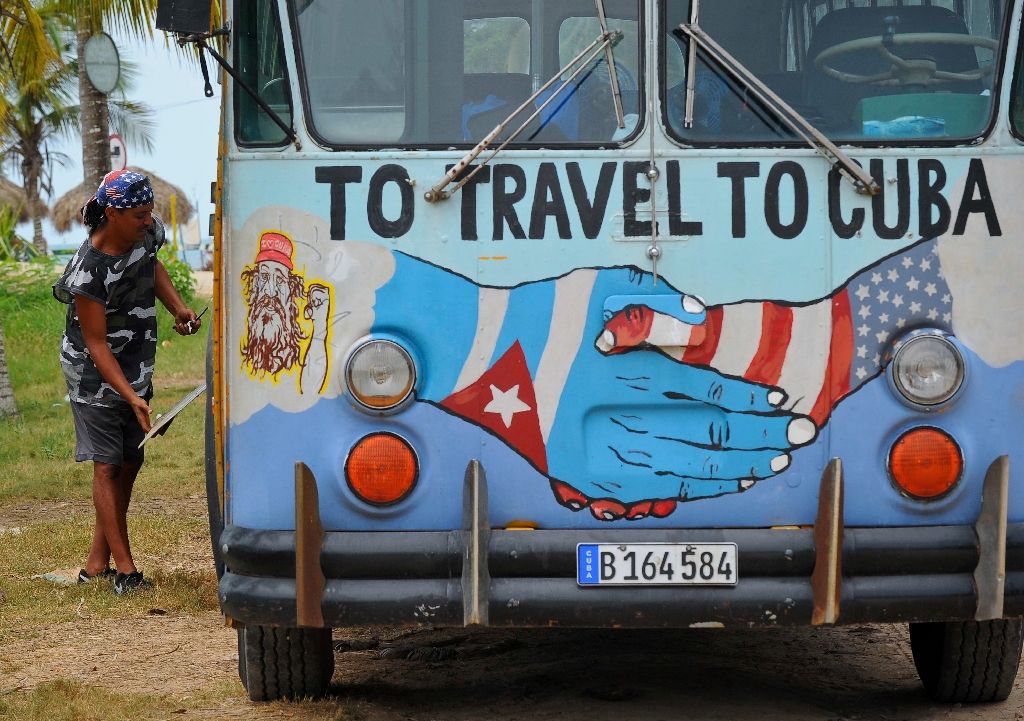 credit: AFP Photo/Yamil Lage // Yahoo! News
12 December 2016-The growing number of US visitors to Cuba-a virtual tsunami that has jumped by 80% since the Obama Administration began relaxing travel to the island in 2015-has prompted the creation of RESPECT, an association of 100 US institutions, organizations and travel organizers that arrange Cuba travel.
From January 2015 through June 2016, Cuba received 732,868 visitors from the United States, and commercial flights opened up from major US cities to a number of Cuban airports, including Havana this November.
"The sudden upsurge has put a strain on existing Cuban infrastructure," said Bob Guild, Vice President of Marazul, one of RESPECT's initiators.  He noted that the association hopes to make US travelers more aware of the need to protect Cuba's cultural heritage and environment, as well as to support the local economy. "Our aim is to make US travel to Cuba part of the global movement for ethical travel," he noted, "particularly important in supporting Cuba's goal to become a sustainable destination for mutual learning and benefit."
RESPECT's principles have been adopted by travel agencies, environmental, artistic, musical, academic, legal, medical, religious and social justice organizations, as well as sister-city and Cuban-American groups.
"We believe the time has come for a new relationship with Cuba," commented Walter Turner, President of Global Exchange, another initiating RESPECT member, "one that starts with transparency and social responsibility, building trust along the way through respectful exchanges."
The 17 Principles issued by the 65 founding organizations and some 35 individuals commit travelers, among other points, to "respect all Cubans, without regard to skin color, gender, sexual orientation, religion, age, political persuasion, abilities or economic status."
Guild emphasized that the association has chosen this week to announce its founding, "a fitting way to commemorate the US-Cuba opening begun at this time two years ago on December 17th," and said RESPECT is welcoming new institutional and organizational members. Those interested should write to respect@respectassociation.org
For more information contact: 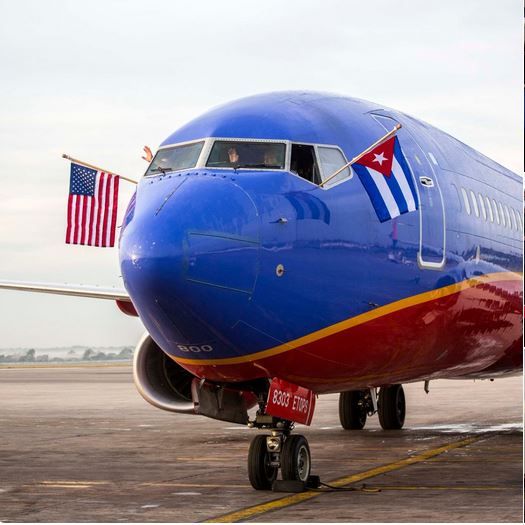 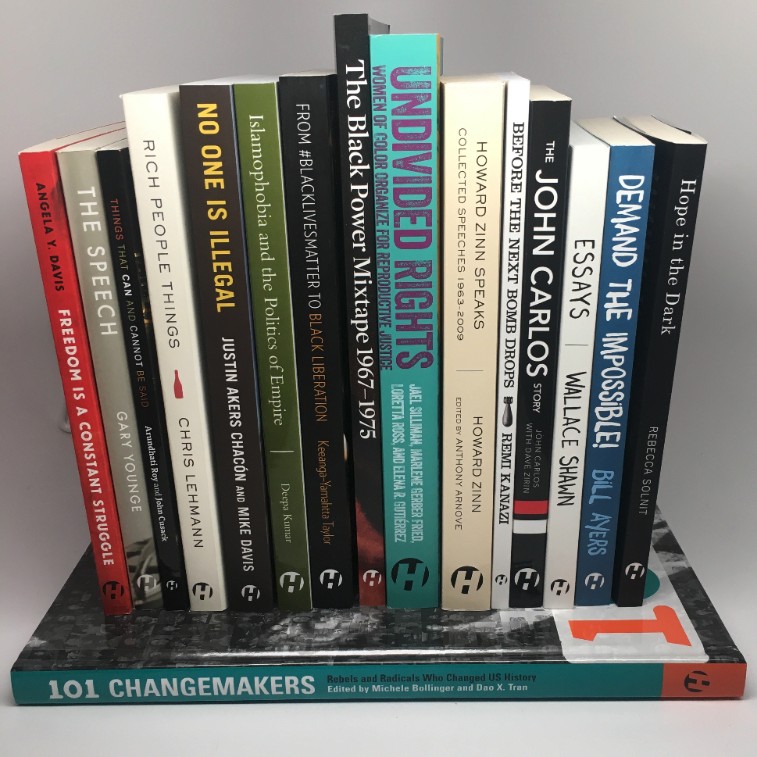 Radical books make great gifts for your family, friends, coworkers, neighbors, and comrades.
We put together a Haymarket Books Gift Guide, assembling some of our books that we think will make great gifts this year, with suggestions for (just about) anyone on your list.
We have suggestions for the young person in your life looking for radical inspiration in the struggles of the past, the sports fan cheering on Colin Kaepernick as he continues to kneel for the National Anthem, or the family member or friend who's been asking you what we can do to fight Trump and organize for a better world.
Oh yeah, and everything is still 50% OFF until January 3rd!
Solidarity,
The Team at Haymarket Books
Continue to Haymarket Books
50% off Radical and Stimulating Fiction and Nonfiction Books, DVDs, and CDs - PM Press 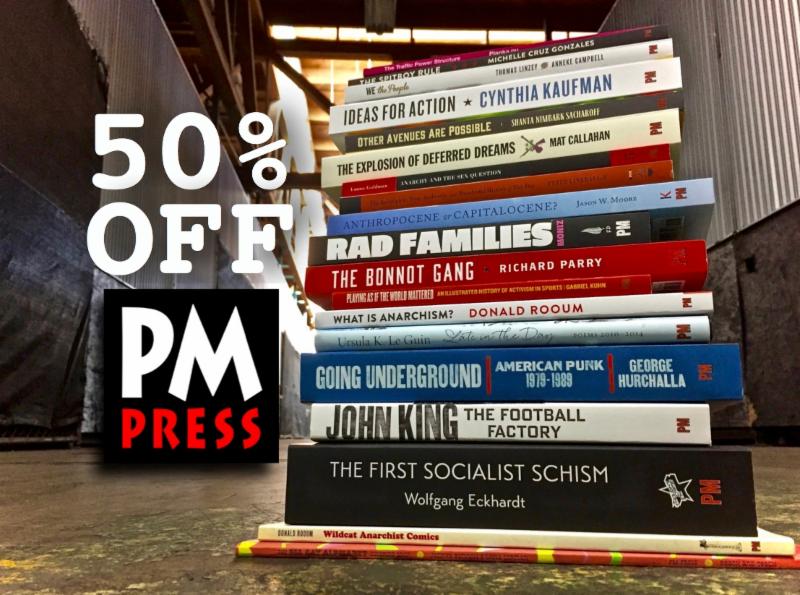 To get your 50% discount on all Books, eBooks, DVDs, and CDs at checkout, type in the coupon code: Gift
To take advantage of this offer, click on the links below and add any item(s) into your shopping cart. There is no minimum (or maximum) order.
Click on the title or image of each book to see more information and a preview online. If you are more of the adventurous type, just click HERE and browse our webstore.