The U.S. has now effectively traded a universal military draft for the far more insidious policy of economic conscription. And while it has become something of a ritual for civilians to address veterans with: “Thank you for your service,” to commend those who have voluntarily put themselves in harm’s way, the ritual also betrays a more profound reality. We are thankful we ourselves aren’t economically desperate enough to have to enlist in this country’s endless wars.

January 7, 2017 Barrett Swanson The Guardian
Printer friendly
The Volunteer Army and What We Really Mean When We Salute the Troops Published January 7, 2017 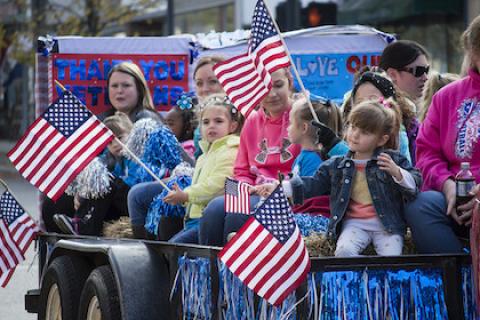 A Zanesville, Ohio Veterans Day Parade. Roughly 75% of US recruits came from neighborhoods where the average family income was less than $65,000. , Paula R. Lively

For the last several years I’ve been teaching English at a small college in central Wisconsin, and almost all of my students come from rural towns whose streets are gap-toothed with foreclosures. This is a sector of the country left untouched by the windfalls of the new economy, a place that used to be an industrial powerhouse, but whose factories are now spotted with the canker of obsolescence.

Most of my students finance their education with a gauntlet of inglorious labor. Some moonlight as fast-food cashiers or dormitory custodians. Others have had to overcome their poverty by serving in the Iraq war. During the idle moments before class, I often find myself glancing at these veteran students. They are men and women who take their studies seriously, enduring without comment the frivolity of the younger students, who use this time to prattle on about celebrity gossip or lewd Snapchats.

Every day on my way home from work, I drive through a corridor of farmland where it’s not uncommon to see Holsteins munching grass under lavender sunsets or children playing tag on manicured lawns – for all its economic misfortunes, this stretch of the Rust Belt still contains flashes of bucolic splendor. But a couple months ago this rustic idyll was tarnished by the arrival of a new billboard. I’ve been driving past this sign ever since, and it wouldn’t be an overstatement to suggest that it has taken residence in my head, becoming an object of morbid fascination.

The image is harmless enough. It shows a band of US soldiers in leaf-patterned uniforms erecting an American flag in greyscale landscape. To certain kind of observer, the placement of this image – in the thick of a tawny-colored meadow – will seem entirely appropriate, confirming our sense that patriotism lives most fervently in the heartland, as endemic to the region as Friday night football games or cattle auctions at the local 4-H. But it’s the caption that strikes me most.

FOR OUR NATION. FOR US ALL, it says.

An anachronistic call to the greater good, this message of personal sacrifice is a noteworthy departure from the military’s previous recruitment campaigns.

Armed service was for a long time sold as a venue for personal advancement. When I was growing up in the late 1980s and early 1990s, our television at home was often overrun with those jaunty, “Be All That You Can Be” commercials, the ones that showed soldiers giving thumbs-up while skydiving from cargo planes, evoking a mood of carefree adventure one might otherwise associate with an ad for a Caribbean cruise.

Viewed in this light, military service seemed like an avenue toward self-actualization, a career in which citizens could harness new skills and jet to exotic locales, all on the government’s dime. Perhaps this is why the army went to such great lengths throughout those decades to put the word “college” in their ads.

As Beth Bailey notes in her book America’s Army: The Making of the All-Volunteer Force, one commercial from that era presented a classroom in which new recruits raised their right hands and swore an oath to keep the country safe. “Now the Army offers up to $50,000 for college,” the narrator said. “If you could use that money, raise your hand.”

Implicit in these ads was the logic of economic self-interest. What historically had been a debt of citizenship was now a financial opportunity, another job to which a potential employee could forfeit his or her rights in exchange for commensurate payment.

Of course, the dictates of the free market have so thoroughly decorated the American consciousness over the last half century that few of us today would bat an eye at this profit-driven appeal. But in the scope of military history, the radical notion of armed service as a potential career path was entirely new, becoming prevalent only after Nixon ended the draft in the 1970s.

One might naturally assume that Nixon’s decision was motivated by the widespread antiwar sentiment at the time. But in truth his position was swayed by a cabal of Chicago School economists, helmed by Milton Friedman, who hosted a conference on the question of military conscription in 1966.

Throughout the week-long symposium at the University of Chicago, which was attended by many conservative luminaries (most notably a young Donald Rumsfeld), Friedman and his colleagues outlined the logic for what is now understood to be the neoliberal paradigm. They suggested that social questions, once the domain of moral and ethical contemplation, should now be viewed exclusively through an economic lens.

Within this context, the draft, Friedman argued, was nothing more than a “conscription tax”, where the government imposed upon a recruited individual a cost equal to “the difference between what it would take to attract him [to armed service] and the military pay he actually received”. Willfully ignoring the constellation of other motivations that might cause a person to enlist – a sense of civic responsibility, a conscientious response to the political climate of the time –Friedman reduced military service to a simple cost-benefit analysis.

This concept might have remained sequestered in the storehouse of wonky conservative thinking if it weren’t for the peculiar circumstances of Nixon’s presidency.

With college campuses marred by violent unrest and gory bulletins from Vietnam darkening the brows of beltway officials, Nixon established the Gates Commission only a few months after his inauguration. Staffed by Friedman and other neoliberal opponents of the draft, this White House roundtable was charged with planning the transition to an All-Volunteer Force (AVF).

While Nixon was easily persuaded by Friedman’s market-driven rationale, he ultimately pitched the AVF to the American public under the guise of civic justice, defending the program with airy platitudes about “the principles of individual liberty”.

Such spine-kindling rhetoric was meant to placate those antiwar protesters who had dogged his candidacy throughout the turbulent election. But as Bailey notes, most young men couldn’t care less about the theoretical underpinnings of Nixon’s decision so long as they were no longer shunted into the perils of war. It was by this stroke of political genius, then, that Nixon had deactivated the antiwar movement: not by ending armed conflict but by terminating the practice of military conscription.

The draft ultimately proved to be a beachhead from which the Chicago School would attack other federal programs, including welfare initiatives and the FDA, but an all-volunteer army was a historic achievement. These doctrinaire economists had resolved a time-worn paradox of western political philosophy, which was that the promise of democratic individualism was incommensurate with the need for a state-run army.

For centuries, democratic thinkers grappled with this contradiction. The 17th century political theorist John Locke, for instance, understood the necessity of a docile military class, but he could not conjure a justifiable political reason for such individuals to surrender their rights to the state. In the end his theories adroitly skirted the issue. Because it was only the “propertied classes” to whom the liberties of democracy were granted, it was assumed that landless citizens would thus bear the responsibility of defending the nation.

Though Friedman’s logic was touted as a victory for democracy, scholars like Deborah Cowen have argued that it ultimately shared a bloodline with Locke’s class-based thinking. After all, when the US military finally transitioned to an all-volunteer force, it offloaded the burden of national defense to those Americans whose economic situation was so dire and desperate that military service became something of a Hobson’s Choice.

As of 2008, roughly 75% of US recruits came from neighborhoods where the average income was less than $65,000. Under the banner of civic justice, the country had effectively traded a universal draft for the far more insidious policy of economic conscription.

It has become something of a ritual in this country for civilians to address veterans with the following commendation: “Thank you for your service.” Certainly this phrase is meant to acknowledge the unutterable sacrifice these men and women have made by putting themselves in harm’s way. But for my own part, this idiom seems to betray a more treacherous and profound reality. I’ve never been able to shake the suspicion that when we thank these veterans for their service, what we really mean is that we are thankful we ourselves don’t have to serve, that in many cases their economic desperation has rescued us from that mortal burden – what Lincoln called “the last full measure of devotion”.

So much consternation has been expressed over the last few weeks about what Trump’s victory might mean for America. In countless ways the president-elect seems hell-bent on continuing to corporatize the government – by splitting his time between Trump Tower and DC, by staffing his transition team with corporate flunkies, by insisting that running a country boils down to nothing more than “making great deals”.

In this moment of encompassing disquiet, perhaps the task of true comprehension might well depend on how we regard something so basic as those individuals who risk their lives for the nation. Perhaps at this moment, we owe them much more than gratitude. Perhaps we owe them something like engagement.

If our economic privilege makes us unwilling to bear the weight of their unsafe burdens, if we can somehow justify our relative comfort in the face of their incalculable sacrifice, then the least we can do might involve participating, in more meaningful ways, in the administrative decisions that could very well seal their fate. Bumper stickers will not do. And neither will the intonation of appreciative bromides.

If I’m thankful for anything, it’s that their service has preserved the country to the point where I can still – at least for the time being – assemble peaceably and challenge policies that besmirch our good name. If nothing else, the outcome of the recent election has blown on the embers of civic engagement, kindling new levels of activism among those segments of the population who for so long have benefitted from neoliberal policies. One hopes this engagement will endure, that in this fragile hour of democracy the debts of citizenship will be more equally maintained.

[Barrett Swanson is the 2016-2017 Halls Emerging Artist Fellow at the Wisconsin Institute for Creative Writing. He is the recipient of a 2015 Pushcart Prize, and his work has appeared in The New Republic, American Short Fiction, Boston Review, The Los Angeles Review of Books and The Point.]