“This European Union is a Project by and for Powerful Multinationals”

Against the self-serving behavior of the elite, we are seeing the rise of two currents. One of them bases its decisions on fear. They want us to direct our anger downwards, to spit on the unemployed, refugees, people who have things even tougher. It’s a trick. By spitting on those below, they are protecting the elite above. In doing so they avoid the question of power. But there is also another current. It is led not by fear but by hope. 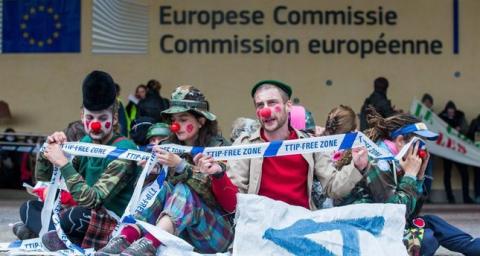 Demonstrators dressed as clowns take part in protests against CETA, a trade deal between the EU and Canada, in front of the EU Commission building in Brussels.,

How on earth should we celebrate the 25th anniversary of the Maastricht Treaty? If you look today at the European Union, or at the eurozone... what precisely is there to celebrate?

Even Commission president Jean-Claude Juncker spoke in his recent State of the Union address of an “existential crisis.” I don’t very often agree with him, but on this occasion he’s definitely right.

So there’s a crisis. That could not be otherwise, as some of us were already saying 25 years ago. Because, despite all of the promises of a social Europe, discussion here in Maastricht twenty-five years ago had nothing to do with European cooperation meant to improve things for you and me. Powerful lobbying groups such as the European Round Table of Industrialists had prepared the Treaty, elaborated it, rehearsed it.

This European Union is a project by and for powerful multinationals. And that explains why the Union today appears absurd. Why can’t Greece renounce austerity, when the Benelux countries can help corporations to dodge their taxes? Why can’t Wallonia block a trade treaty, yet the Commission can bring a court action against German and French minimum wages? Why, while Germany is running an enormous trade surplus, is the Italian economy staggering around?

Competition and the hunt for profits within a free market are the basis of the whole European Union. They are carved into all of the Union’s fundamental texts. They proliferate, stifling everything.

It isn’t the case, therefore, that the Maastricht Treaty or the euro are the exclusive causes of all this misery. But still, from the word go Maastricht provoked astonishment. How could you bring such very different economies under the same umbrella? In northern Europe wages were four times higher than in the south. To this question the establishment had an answer: “the Maastricht norms.” Convergence they called it. Grow towards each other. Bring state debt down, and limit budgetary deficits. But convergence didn’t happen. The gap grew bigger. Between countries, but also within countries.

That could not be otherwise in such a free internal market where competition and multinationals rule and have their way with people and nature, with regions and countries. And the single currency didn’t help, either. In the internal market the weaker countries even lost one of the few means to maintain their competitiveness, by adjusting their exchange rates.

After Maastricht things went from bad to worse. We got the Stability and Growth Pact, that made public investment virtually impossible. And then we got so-called Economic Governance, designed to determine the whole of economic policy in an authoritarian fashion.

In terms of democracy too, things aren’t going well. The European Union is becoming ever more authoritarian. Greece is being bombed flat. Referenda are ignored. I heard that the Dutch government too has some strange ideas about what to do with the result of your Ukraine referendum. In the European Parliament new procedural rules will silence alternative voices. European election after European election, fewer people are voting. In Slovakia last time the turnout was a mere 13%.

Between society and the establishment looms an enormous gap, a veritable ravine. This has even been noticed recently by the Financial Times. When Wallonia refused to sign the Comprehensive Economic and Trade Agreement – the CETA – with Canada, the business people’s newspaper commented that the eurocrats never thought they’d have to reckon with Frederic Gillot, a former steelworker who now represents the Belgian PTB-PVDA in the Walloon Parliament.

But now they do indeed have to do just that. People have had enough of this self-serving behaviour of the elite. Against that establishment we are seeing the rise of two currents. One of them bases its decisions on fear. They want us to direct our anger downwards, to spit on the unemployed, refugees, people who have things even tougher. It’s a trick. By spitting on those below, they are protecting the elite above. In doing so they avoid the question of power. Even a billionaire like Trump can then present himself as anti-establishment.

How can we progress? That was today’s question. So I’d just like to answer that too. The alternative to this right-wing politics is a different sort of politics, bottom-up politics. Together changing our society from below. Together with all of those forces socially active in the belly of society. We base our choices on hope. That’s the core message carried by all the new social movements making their voices heard everywhere, and ever louder.

Resistance offers hope. Resistance is diverse: old and young search and hope. Resistance is ‘populism’, they say. Really? Because resistance radically challenges the elite? Wasn’t freedom-fighter also at one time a dirty word? Resistance to injustice strengthens people, raises our awareness, teaches us to stand up for ourselves.

And that’s important. Because if Europe is to survive, this Union must be flipped upside down. We can’t simply clothe this construction of competition differently. We can’t just give all of this inequality a quick makeover, a fresh lick of paint. Otherwise, the nationalist tensions which belong in the twentieth century will also show their ugly mug in this century.

And to be absolutely honest, I’d no sooner live in a Belgium run by nationalists or right-wing liberals than in a Europe run by the same creeps. You have to admit, get rid of Juncker but hold on to Dijsselbloem, and what have you achieved? Nothing.

We must begin with a clean sheet, a blank page. PTB-PVDA chairman Peter Mertens highlights in his latest book: It cannot be that the richest countries in the world are unable to guarantee their citizens basic rights. That’s simply not normal. It’s not normal that the right to work, to housing, to education, to health care, that these rights aren’t respected. That’s what European cooperation should be for. Their duty to apply basic rights. Starting over with Europe means that sustainability, democracy and fundamental rights become our only ‘scoreboard’.

We need a transparent Europe right now. Let us live-stream all these corridors and back-rooms. Get rid of those politicians going in and out of the revolving doors of corporate boardrooms. We need trade unions, consumers and environmental organisations, critical members of the public. People driven by social and ecological enthusiasm. Developments in digital technology even allow to involve the public directly in democratic processes.

What's next? A new Europe in which work and wealth are redistributed. A Europe that activates wealth: a wealth tax for millionaires, a tax on financial transactions, and an end to tax havens. Putting an end to austerity, pseudo-recovery plans, social dumping and tax dumping. A Europe with higher wages, a minimum wage and equal pay for equal work for all. A Europe where we retire earlier. A human scale continent. For us all to once more live, relax, enjoy ourselves and develop.

A new Europe will also take a fresh look at public services, public investment and public sectors. Let’s invest in the climate, in clean energy, in public transport, in health care, education, culture, housing. Strategic, crucial branches of the economy, such as energy, must be defended against financial markets and stock exchange speculators. The climate, for one, is too important to be left to the market.

If we are to build Europe anew, we need a new principle of European law: the principle of non-regression. Such a principle would mean that you could no longer introduce measures which in social, ecological or democratic terms represent a step backwards. Instead of bitter competition between peoples, we would have solidarity, a voice in our own affairs, rights and sustainability. A Europe like that would be worth working for.

And yes, I'm aware Santa Claus will soon be here, but this isn’t a utopian wishlist. On the contrary. For the first time in a long while, it’s more utopian to believe that everything will stay as it is. Nobody still believes that. Messing around is no kind of option. You can feel the change. And together we can change direction, change attitudes. And if we do that, as did those dockworkers who came from Hamburg to Rotterdam to Antwerp to stand up to the European Commission; as has that movement in Germany, in Belgium and the Netherlands which is fighting against free trade diktats and cuts in public spending. As you will perhaps soon do with a referendum on the free trade treaties with Canada and the United States. Then perhaps we’ll see each other not at the Treaty’s birthday party, but at its funeral.

Marc Botenga works for Belgium's radical left PvDA-PTB (Workers Party) and is responsible for European Affairs.  He was a guest speaker at the equally radical Socialist Party of the Netherlands' gathering to mark the 25th anniversary of the Maastricht Treaty which established the European Union and institutionalised neoliberalism in Europe.