tv Black-ish's 'Lemons' Is Art for the Age of Trump

The latest episode of the ABC sitcom expresses anger at the election’s outcome. It also insists on empathy. 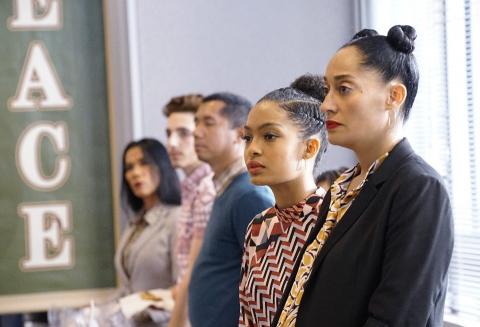 What will the Trump presidency mean for the nation’s artistic output? Will the United States’s new Commander in Chief, who has been by turns part of the entertainment industry and a mocker of it, inspire creators in their endeavors? Will he deter them? “In dark times,” David Foster Wallace mused, “the definition of good art would seem to be art that locates and applies CPR to those elements of what’s human and magical that still live and glow despite the times’ darkness.” While these times, of course, are not dark for everyone, for those for whom they are—for the Americans who are confused and angry and fearful about the new course of the nation—it’s an open question: What will art look like in the years to come? Will it protest? Will it grapple? Will it retreat?

Here’s an early entry in the canon of Trump-era art, one that might well offer a clue to all that: “Lemons,” the episode of Black-ish that aired on ABC on Wednesday night. The episode takes that humblest of things—the primetime TV sitcom—and uses it to find, per Wallace’s mandate, the human magic of this moment. “Lemons” (the title is both a reference to, and a rejection of, the old adage about making lemonade) is art that is supremely aware of its own ability not just to reflect the world, but to help people make sense of it. It is art that achieves the neatest of tricks: It expresses anger while also insisting on empathy.

“Lemons” is set two months after the 2016 election—which is to say, this episode of Black-ish is happening now-ish—and it finds the Johnsons each, in their own way, coping with the aftereffects of Trump’s upset victory. (“America has a love affair with upsets,” Dre notes in the episode’s opening monologue. But “what happens when the winners and losers are supposed to be on the same team?”)

Dre, for his part, is trying to move on from the events of early November, focusing his attention—or, at any rate, trying to focus his attention—on a big pitch at work. Bow, on the other hand, is taking refuge in activism. (“Everything you’re wearing is from an NPR commercial!” Dre tells her, as he takes in his wife’s Black Lives Matter button, Habitat for Humanity sweatpants, and UNICEF flip-flops.) Jack is determined to be optimistic. (“I don’t see this glass as half-empty, I see it as half full!” he exclaims, while staring at a vessel that is actually 1) a bowl and 2) empty.) Junior, with the help of Pops, is working on a monologue that he will deliver at Valley Glen Prep’s appointed Healing Day—a recitation of Martin Luther King’s “I Have a Dream” speech. (“Lemons,” fittingly, is airing directly before the national holiday that celebrates King’s legacy; the iconic speech runs like a refrain through the episode.)

And then there’s Zoey, who busies herself making, yes, lemonade. Bow, confused and a bit dismayed by her daughter’s evident impulse toward escapism—she suggests that maybe Zoey should take a few minutes to make calls on behalf of Planned Parenthood instead—attempts to ascribe political meaning to Zoey’s beverage-brewing effort. “I get it—the country gave us lemons, and you make lemonade,” Bow says. Or maybe it’s more like Beyoncé, she says—how “she uses lemonade as a symbol for women, and their self-knowledge and healing.” Later, though, Zoey explains herself. “It’s not liberal lemonade, it’s not conservative lemonade,” she tells her mother. “It’s just lemonade—that I made with love. That’s what I want my contribution to be. Love.”

Lemonade, in other words, isn’t just the political power of things that can be shared, apolitically; it’s also the extremely varied ways people have of coping with the world and its surprises. Someone zigs. Another zags. It’s unpredictable. It’s chaotic. These characters, after all, are in mourning. And mourning is as individualized a thing as it is an unpredictable one.

At Dre’s work, too, everyone is reacting to things just a little bit differently. People are distracted, but in slightly different ways. In one set piece, “there is no way we’re getting any work done today” gets repeated in the Stevens & Lido conference room as November 9 becomes December 9 becomes January 9. People are angry, and looking for someone else to blame. (On a whiteboard in the firm’s conference room is scrawled a question—“Whose fault is this?” under which is written, alternately, “THE GAYS / LATEEN-OHS / THE BLACKS / WHITE WOMEN.” Each blame-ee has been crossed out as the workers realize that fault cannot be neatly assigned.)

At one particularly powerful moment, Lucy, the firm’s litigious employee, makes a confession: She voted for Trump. Not because she likes him or agreed with the claims and threats he made during the campaign, she says, but because she gave Obama a chance—twice—and hasn’t seen her life get much better. “It’s eight years later, my dad’s still out of work, my hometown is about to go under,” Lucy tells her colleagues, “and Hillary comes out saying she’s basically going to keep everything the same.” Lucy was conflicted about her vote. But she wanted to shake up the system. Her colleagues hear that. They don’t agree with her. But they hear her.

“Lemons,” in general, takes for granted that its viewers will share the politics of its characters: The episode figures that, when Bow tells Zoey that “as a mom, it is my job to deliver a world where the values that I raised you to believe matter,” those are values that are, in broad ways as well as narrow ones, shared by Black-ish’s viewers. And yet this is a piece of TV that is acutely aware of the dangers of filter bubbles, and that isn’t satisfied with simply reflecting half of the country back to itself. “Lemons,” its glass-half-empty title notwithstanding, is trying to understand. It is giving someone like Lucy a voice, and a hearing. It is giving those things, too, to Dre, who finally loses his temper when Mr. Stevens accuses him of apathy: “I love this country,” Dre retorts—“even though, at times, it doesn’t love me back.”

And then Dre gives a summary of the civil rights movement, as archival images and footage fill the screen in a montage, and “Strange Fruit”—the song made especially powerful because it is Nina Simone’s achingly taut rendition—plays as a score. Dre talks about striving, in spite of injustice. He talks about hoping, in spite of history. He concludes, “I love this country, as much, if not more, than you do, and don’t you ever forget that.”

It was a scene in a sitcom that was also a history lesson that was also a plea for empathy. It was a validation of what TV—particularly network TV, with its relative ability to summon wide and varied audiences—can accomplish, even as culture fragments, even as Americans threaten to self-sort themselves away from empathy.

Kenya Barris, Black-ish’s creator and showrunner, has generally resisted, he has said, the soapboxery of the Very Special Episode vein. Black-ish may have had episodes that overtly doubled, like “Lemons,” as cultural commentary—“Hope,” “40 Acres and a Vote”—but “we don’t like to say ‘these are the topics,’” Barris told TV Guide in September. He and his co-creators preferred a more organic approach to merging their fictions with the truths of the world beyond. The 2016 election, however, changed that. “From Tuesday night to Wednesday morning, I think my show changed,” Barris told NPR’s Rachel Martin of the events that turned November 8 into November 9. In the aftermath of the election, Barris said, We sort of calmed down and we were like, you know what? We have to talk about things that people might not want to talk about openly. But we have to dig in deeper and stay later and have more real conversations and argue amongst ourselves more and really bring our emotions to the surface and really say things that people want to hear... We have to do that more. We have a responsibility. It’s not just TV for us anymore.

MEGAN GARBER is a staff writer at The Atlantic, covering culture.