Marchers Across the Country Turn Out In Support of Immigration Reform

Fear and uncertainty punctuated immigrant rights rallies across the country, as speakers shared their worries about the future of the country. Actions occurring simultaneously in fifty cities in the first large-scale immigration demonstration since the election. 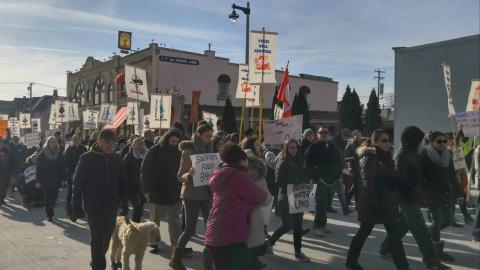 Marchers for immigrant rights in Milwaukee were one of 50 such demonstrations across the country on Saturday, January 14, 2017. , Photo by Iseli Hernandez.

With less than a week until Donald Trump takes office, tens of thousands of immigrant activists in cities across the country rallied on Saturday against the president-elect, whose promise of mass deportations and hateful rhetoric have terrified communities of color.

In Chicago, 1,300 people packed into the Chicago Teachers Union headquarters on the West Side to hear how they can resist in the Trump era.

Poetry, live music, personal testimonies, and prayers injected a dose of hope and energy into the event, one of many actions occurring simultaneously in fifty cities in what's the first large-scale immigration demonstration since the election.

“We will lock arms together and say no to the politics of divide and conquer,” Ron Taylor, a Chicago-area pastor and executive director of the United Congress of Community and Religious Organizations, told the cheering crowd. “We will resist, we will stand together in unity, and we will win. And there is no wall that can stop us from standing together.”

Fear and uncertainty punctuated the event, however, as speakers shared their worries about the future of the country.

“I’m a Syrian refugee that had to start from zero,” Rehab Alkadi, a thirty-one-year-old mother who came from the war-torn country four years ago, told the crowd. “I just want to live in peace and dignity."

From the moment he stepped off the escalator and into the gilded lobby of his eponymous tower in New York to announce his campaign, Trump made xenophobia and racism proposals cornerstones of his presidential run. Chief among these were his pledges to deport all eleven million undocumented immigrants, build a wall paid for by Mexico on the southern border, and ban all Muslim immigrants from entering the country. His rhetoric and surprise victory inspired a rash of hate crimes across the country, and emboldened the country’s white supremacy movement, including the burgeoning “alt-right.”

Since election night, though, Trump has backpedaled on some of his immigration promises. Take, for example, the future of the more than 700,000 young people with Deferred Action for Childhood Arrivals (DACA), a 2012 executive order by the Obama administration allowing undocumented immigrants who came to the U.S. before they were sixteen to apply for two-year renewable authorization to remain in the U.S. and work legally. Trump seemed to suggest in a Time magazine interview in December that he wouldn’t deport them all, as he'd previously promised, saying “We're going to work something out that’s going to make people happy and proud.”

On the subject of the wall, Trump has said fencing could make up part of the barrier with Mexico. And a Trump adviser told CNN the incoming administration would not prohibit all Muslim immigration, prompting threats of a “revolt” by angry white supremacists.

The uncertainty of what Trump will bring is horrifying, says Cindy Agustin, a deferred action recipient and graduate student at the University of Chicago. Thanks to the work permit she got through DACA, she’s been able to advance professionally as a social worker at a nonprofit, she says. But that's all under threat now, as is the fate of both her parents, who are undocumented.

DACA “helped me grow my network, earn money, help my family financially, and also feel like a normal person without having to worry ‘what am I going to with my life, am I going to be deported?’ ” Agustin said.

Agustin’s parents, along with about four million others, would have qualified under an expansion of the deferred action program that was proposed by Obama in 2012 but defeated by a coalition of Republican states in federal court. The Obama administration challenged that decision all the way to the Supreme Court, but in a June decision, the justices deadlocked, thereby upholding the ban.

At another rally for immigrant rights, in Wisconsin, Leonardo Valencia marched with hundreds of others to the Milwaukee County Courthouse, to the beat of ranchera songs, folk music, and chants of “Si se puede.” Valencia, a software engineer in the United States on a special visa for high-skilled workers, worries that Trump will limit such programs, in addition to deporting the undocumented en masse.

“We want to open Trump's eyes so he can see it won’t be so easy to do what he wants to achieve,” Valencia said.

Outside the county courthouse, Esteban Avila, held aloft a large flag American on one side and Mexican on the other. He told The Progressive he was sure Saturday’s actions in Milwaukee and elsewhere would make a positive impact.

“I just don’t understand his policies,” Avila said of Trump. “But I don’t think he understands them either. He’s our President, but we’re here to stay. Look at the large numbers we have.”

For Nancy Serrano, a bilingual language arts teacher at Hernandez Middle School in Chicago, the fear of a Trump presidency has hit her students hard. Many of them are undocumented or have relatives who are undocumented; some have had parents deported. Trump’s election has traumatized certain students to the point of tears at the mere mention of his name, she says.

In response to the distress among her pupils, Serrano switched up her curriculum. She devoted several lessons to immigration history and law, and encouraged students to write reflections on how the election made them feel. She taught students how to argue in favor of humane immigration policy, both verbally and in writing.

“The idea is that by becoming more knowledgeable, they can become more hopeful, and be inspired to be active and get involved,” she explained.

Brian Guardado, fifteen, a high school sophomore in Chicago whose parents are undocumented, said coming out before Trump takes his oath sets the right tone for demonstrating during the rest of his administration.

As menacing as the Trump years ahead look, the Obama Administration was not exempt from criticism. Some at the rally expressed exasperation with the departing president, who promised to push for comprehensive immigration reform during his first year in office. Instead, Obama’s presidency holds the record for the greatest number of deportations under any president at roughly three million; by comparison, his Republican predecessor, George W. Bush, was responsible for two million deportations.

Though several current and former elected officials were present at the Chicago rally, including Senator Dick Durbin, Democrat of Illinois, and former Democratic Illinois Governor Pat Quinn, none were slated to speak. The move seemed to reflect frustration with Washington’s inability to come up with comprehensive reform during the Obama years.

“We’re grateful you’re here, but today you will not hear from them,” presenter Mali Bughatti, of Asian Americans Advancing Justice, told the crowd after acknowledging the presence of the politicians. "You will hear from community leaders from across the state that will lay out a vision for how we will face the challenges before us. Today, we ensure that our politicians know that we expect them to fight with us and follow our lead.”

Durbin is the cosponsor of what for now is the best legislative hope of immigrant youth. The bipartisan BRIDGE Act, introduced in the Senate on Thursday, would provide temporary legal status to those who qualify under DACA until a more comprehensive bill is passed.

Durbin told The Progressive he was encouraged by Trump’s Time magazine interview, as well as recent remarks by House speaker Paul Ryan in which he appeared to distance himself from some of the President-elect’s harsher proposals. He said comprehensive immigration reform is still his goal, but for now shielding DACA beneficiaries is the top priority.

“There’s an immediate problem with DACA-protected people if the order is repealed,” Durbin said. “We’re trying to move in a triage fashion with this first most vulnerable group. I support comprehensive reform. I am as concerned about the parents as I am the children, but the first part is to protect the children.”

Oliver Ortega is a writer based in Madison. His work has appeared in The Progressive, Counterpunch, the Boston Globe, and other publications .

Iseli Hernandez contributed to the reporting for this story.