As inequality and its consequences mount, even more struggles and progressive formations will emerge. They are likely to be imperfect and messy, but from them useful ideas as to the future of collective worker action will become clearer. One thing is sure, though: Such a vision will not come from Andy Stern. 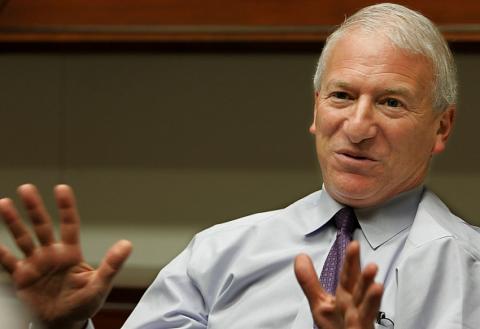 Stern has been talking about the future of the labor movement for years, with a dazzling variety of solutions and approaches., Luis Sinco/Los Angeles Times
Prescriptions to address what’s ailing workers and their unions continue to come fast and furious—and they are getting weird. Fantasy advice is coming from tenured academics, foundation-supported labor activists and corporate shills leveraging their former union positions.
The latest entry in this peculiar sweepstakes comes from an old acquaintance, the mercurial Andy Stern. Stern, the former president of the Service Employees International Union (SEIU), now works for gig economy “platform” companies and is lobbying for a New York law to refuse employee protections for workers at Handy and other such companies. He recently penned an article in National Affairs, along with right-wing think tanker Eli Lehrer of the R Street Institute.
Stern has been talking about the future of the labor movement for years, with a dazzling variety of solutions and approaches. Remember his claim, and $14 million of SEIU money, that call centers were essential to “high-quality member representation?” Now Stern and Lehrer argue that unions can survive financially by selling representation to non-union workers. A thorough reading of their piece, however, reminds us that Stern’s inconsistency remains consistent.
Stern and Lehrer propose to “modernize” labor law, by essentially transferring it from the federal level to a system specific to states, cities or even individual companies. They argue for rules allowing legal “waivers” from existing labor and employment laws. Their idea is to give states, localities and workplaces the ability to “waive” the protection of federal laws, replacing the strictures of these laws with rules of their own choosing, such as imposing longer work hours and eliminating overtime pay.
Specifically mentioned as ripe for waivers are the National Labor Relations Act, the Fair Labor Standards Act, the Labor-Management Reporting and Disclosure Act, the Employee Retirement Income Security Act (ERISA) and the Taft-Hartley Act. The exact mechanics of the waiver process is unclear, but Stern and Lehrer claim these waivers will equally benefit workers, unions, employers and entrepreneurs, leading to “new business and revenue models for labor organizations” and “new opportunities for entrepreneurs,” bringing more jobs and greater prosperity.
How will waivers help unions? Stern and Lehrer write that “the more-powerful unions of the 1950’s provided a bulwark against communism and were often skeptical of new government-provided benefits.” With an embrace of waivers, “Newly empowered unions could serve a similar purpose.” Huh?
Lessons learned
Outlandish on its face, the article still offers an opportunity to talk about a number of important issues. First, waivers would exacerbate the blue state-red state split. Advocates in blue states might be able to use waivers to expand workers’ rights. But waivers in other states would certainly be regressive. Look at Texas. Left to its own devices, that state’s draconian move to “voluntary” workers compensation destroyed workplace injury protection, resulting in extraordinary pain and suffering.
Second, as seductive and profitable as these big idea projects are for Stern and others, they seem ridiculous in the current climate and take attention away from active organizing. Labor has repeatedly tried to enact progressive union legislation and failed. So, why would it work now?
Third, Stern’s proposal highlights a critical question: Who are workers’ allies? Historically, the faith community, left activists and oppressed racial and ethnic groups have worked with unions and workers in common struggle. But for Stern the answer is truly creepy. For him, allies are gig economy entrepreneurs and the R Street Institute, a think tank inspired by neoliberals like Milton Friedman and Friedrich Hayek.
Finally, ignoring the grinding paternalism faced by workers today, especially in the on-demand industry, those in Stern’s make-believe world preach that all can be harmonious between labor and capital, ignoring American history and the explosive growth of income inequality. Collective bargaining and workers’ struggle are not only discounted; they are often ridiculed.
It is important to note that Stern’s ideas are similar to those of anti-union think tanks like the Mackinac Center for Public Policy, which produced F. Vincent Vernuccio, now a member of Trump’s transition team at the Department of Labor. Vernuccio co-wrote a piece entitled “Right-to-Work Strengthens Unions.” In their article, Stern and Lehrer similarly embrace right-to-work, as it is, in their words, “unfair to force representation on workers who don’t want it.”
Organic resistance
No one disputes that unions are in deep, deep trouble. But the advice of those who profit off their “expert” opinions—coming at a time when collective worker-led action, the major bulwark against inequality, is being attacked from all sides—suffers from a separation from the actual lives of workers.
New ideas arise out of struggle, not from foundations, corporate shills or right-wing think tanks. From the worker occupation of Republic Windows and Doors in Chicago, to the Occupy movement, to Black Lives Matter, experience shows that where there is oppression there is resistance. Each eruption provides rich lessons. The most recent example is the “Standing Rock” model of resistance, a form of direct action that combines leadership from those most affected supported by a powerful group of allies.
As inequality and its consequences mount, even more struggles and progressive formations will emerge. They are likely to be imperfect and messy, but from them useful ideas as to the future of collective worker action will become clearer. One thing is sure, though: Such a vision will not come from Stern.
Never has independent journalism mattered more. Help hold power to account: Subscribe to In These Times magazine, or make a tax-deductible donation to fund this reporting.
JAY YOUNGDAHL
Jay Youngdahl is a southern union and civil rights lawyer who writes the “Raising the Bar” column for the East Bay Express, a newspaper based in Oakland, California.