Angela Davis: ""We recognize that we are collective agents of history and that history cannot be deleted like web pages." 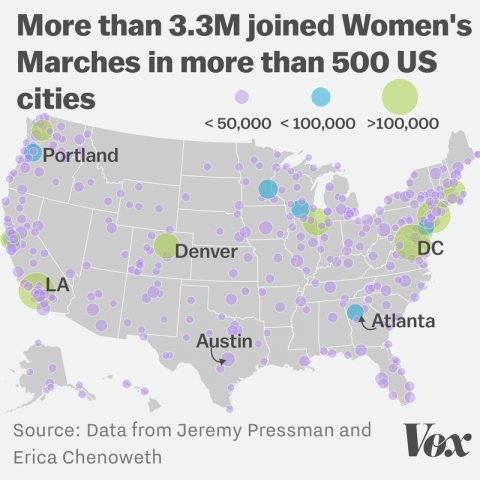 “Even using a conservative estimate, it was the single largest day for a demonstration in the US,” Chenoweth, an expert on political protests and civil resistance, told us., Vox, using data collected by Collection in progress by Jeremy Pressman (@djpressman, U of Connecticut) and Erica Chenoweth (@EricaChenoweth, U of Denver).

The Women's Marches May Have Been the Largest Demonstration in US History
Sarah Frostenson
Vox
January 22, 2017
http://www.vox.com/2017/1/22/14350808/womens-marches-largest-demonstration-us-history-map

Crowd estimates from Women’s Marches on Saturday are still trickling in, but political scientists say they think we may have just witnessed the largest day of demonstrations in American history.

Chenoweth offered to help him, after being struck by how many people she saw at the march in her home town of Denver.

“It was much bigger than I expected and by the time I got home I was really curious if that was happening nationwide or not,” said Chenoweth.

The researchers say much of their data is still incomplete and will change in the coming days as more estimates become available. Roughly 200 marches held across the US still haven’t released any attendance numbers yet.

But Chenoweth said she was stunned by how many communities across America held sister marches to the main event in Washington, DC. She and Pressman received data from places like Stanley, Idaho (population of 63), where nearly half the town — 30 people — came out to protest, including resident celebrity Carole King.

The turnout at events outside the US was significant, too. Chenoweth and Pressman have recorded over 100 international Women’s Marches with an estimated attendance of more than 260,000.

Chenoweth cautioned me that while 3.7 million Americans protesting on Saturday may be the largest turnout in US history in absolute terms, she wasn’t sure if it was the largest protest proportionally speaking. For instance, she said, it’s possible that protests in cities around the US against the Iraq war in 2003 may have drawn as many people or more relative to the population at that time.

As she and Pressman continue to collect data, she hopes that civic organizers will be more involved with gathering crowd data in real-time to help researchers who study social movements.

“For people who organize these kinds of activity, there is something that can be learned in terms of techniques of using [satellite images or aerial photos] to estimate crowd density,” said Chenoweth. “It might be a good time to think about how we democratize that knowledge.”

Civil rights activist Angela Davis spoke at the Women's March on Washington on Saturday in front of a crowd of hundreds of thousands who gathered in the nation's capital to protest the Trump administration. Davis, who is known for writing such books as Women, Race, and Class, made a passionate call for resistance and asked the audience to become more militant in their demands for social justice over the next four years of Trump's presidency.

Read the transcript of the speech in its entirety here:

"At a challenging moment in our history, let us remind ourselves that we the hundreds of thousands, the millions of women, trans-people, men and youth who are here at the Women's March, we represent the powerful forces of change that are determined to prevent the dying cultures of racism, hetero-patriarchy from rising again.

"We recognize that we are collective agents of history and that history cannot be deleted like web pages. We know that we gather this afternoon on indigenous land and we follow the lead of the first peoples who despite massive genocidal violence have never relinquished the struggle for land, water, culture, their people. We especially salute today the Standing Rock Sioux.

"The freedom struggles of black people that have shaped the very nature of this country's history cannot be deleted with the sweep of a hand. We cannot be made to forget that black lives do matter. This is a country anchored in slavery and colonialism, which means for better or for worse the very history of the United States is a history of immigration and enslavement. Spreading xenophobia, hurling accusations of murder and rape and building walls will not erase history. "No human being is illegal.

"This is a women's march and this women's march represents the promise of feminism as against the pernicious powers of state violence. And inclusive and intersectional feminism that calls upon all of us to join the resistance to racism, to Islamophobia, to anti-Semitism, to misogyny, to capitalist exploitation.

"Women's rights are human rights all over the planet and that is why we say freedom and justice for Palestine. We celebrate the impending release of Chelsea Manning. And Oscar López Rivera. But we also say free Leonard Peltier. Free Mumia Abu-Jamal. Free Assata Shakur. "Over the next months and years we will be called upon to intensify our demands for social justice to become more militant in our defense of vulnerable populations. Those who still defend the supremacy of white male hetero-patriarchy had better watch out.

"This is just the beginning and in the words of the inimitable Ella Baker, 'We who believe in freedom cannot rest until it comes.' Thank you."