food How the Sound of Eating Changes How We Taste

Recent experiments show how sound can interplay with your sense of smell—and, thus, flavor—in the brain 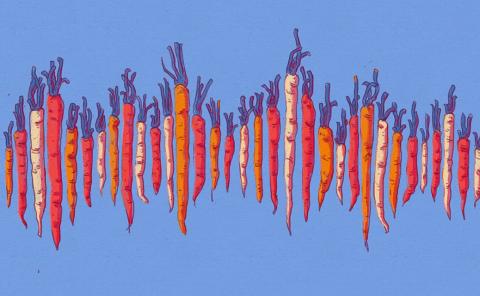 Crispy, crunchy, crackly, creamy, carbonated, squeaky—as much about what we hear as what we feel., Cook's Science

First, let’s back up and talk about flavor.

Though the two terms are often used interchangeably, flavor is different than taste. Taste refers to the five (give or take) sensations perceived by the taste buds on your tongue and in your mouth—salty, sweet, bitter, sour, and umami. Flavor is a term that includes taste—but also incorporates the other senses, including sight (“you eat with your eyes first”) and touch (texture), but especially smell. In fact, it’s often estimated that 80 percent of flavor is made up of scent. (Remember what it’s like when you have a bad winter cold, are all stuffed up, and cannot smell a thing. What does that do to your perception of the flavor of food? It’s likely that most food tastes like cardboard—the flavor is gone.) And sound plays a role as well. Perhaps a larger one than many might suspect.

I recently spoke with Daniel Wesson, currently assistant professor of neurosciences at Case Western Reserve University. Along with his mentor Don Wilson, he worked on experiments designed to show how sound can interplay with your sense of smell—and, thus, flavor—in the brain.

It all started with scent. Wilson and Wesson wanted to understand more about how the olfactory tubercle (a structure at the base of the brain that is involved in odor detection) responds to smell, experimenting with mice. All was going well. They monitored the activity in the mice olfactory tubercles while presenting them with different odors. And then one day during testing, Wesson set down his coffee cup on the counter, clank, and noticed a spike in activity in the tubercle. Did the tubercle also respond to sound? Or was it the combination of smell and sound? Now this was something to dive into.

“[Wilson] and I designed some experiments to simultaneously present sound and smells together,” said Wesson. “That showed interesting things. Imagine. We found that there was a large population of cells in [the] olfactory tubercle that showed activity with smell [about 60 percent]. A subset of those cells showed activity with sound [about 20 percent]. And then a very neat thing: Some neurons represent both sets of information. Here’s a single neuron in your brain that not just says, ‘I smell a smell,’ but also says, potentially, ‘I hear a sound.’ When presented simultaneously (with smell and sound), the activity in that cell is entirely different.”

So what does that mean? Basically, what you hear can change the way your cells process odors. The noise in your environment or in your mouth can impact the scents you perceive. Some members of the media dubbed this connection “smound.”

“When you’re eating food, you’re not just tasting,” said Wesson. “You’re smelling, you’re feeling the texture of food, and you’re hearing the food—either on the plate in front of you or chewing in your mouth. And all of this is going to all come together to change the activity in your brain, to give you the unique perception you know as that food.”

In 2004, for a paper published in the Journal of Sensory Studies, he had his research subjects sit in his lab and eat Pringles potato chips—180 chips each, to be exact (after all: you can’t eat just one). And as each subject ate, Spence and his team altered the crunching-chip sound in their headphones—either deadened to sound like stale chips or amplified to sound like fresh chips.

And what did he find? Those that heard the sound of fresh chips rated the chips they were eating as fresher. Those that heard the sound of stale chips rated the chips that they were eating as staler. But they were all eating the same, crunchy fresh Pringles. Spence and his colleagues have since gone on to test the difference in perception of flavor and sound in many other foods, including sparkling drinks.

“So if you think about the food attributes that we all know and love—crispy, crunchy, crackly, creamy, carbonated, even squeaky—these are attributes of food that initially you think this must be about what we’re feeling in the mouth,” said Spence. “But, in fact, the research shows that they are as much about what we hear in our ears as what we feel in our mouths. And so for that reason I think of sound as the forgotten flavor sense.”

It’s not surprising that crispness is a sound that we appreciate. Evolutionarily it’s associated with freshness—think fresh fruits and vegetables.

The sound of the food in your mouth is not only important for how you perceive flavor, but also for how food companies want you to perceive flavor. “Once you realize just how important the sound is to the overall multisensory experience, you start to understand why it is that the food marketers spend so much of their time trying to accentuate the crispy, crunchy, and crackly sounds in their advertisements,” wrote Spence in the journal Flavour in 2015. “I, for one, am convinced that the chocolate crackling sound is accentuated in the Magnum [ice cream bar] adverts. Obviously, you want to make sure that you get the sensory triggers just right if you happen to be selling 2 billion of these ice creams per year.”

Not everyone thinks about literal sound when it comes to flavor. Todd Maul, bartender at Café ArtScience in Cambridge, Massachusetts, thinks about sound as he builds his drink program in a slightly different way than your average bartender. It’s not just how the drinks taste, or even how they actually sound in your mouth; it’s about the sounds they make you think of as you drink them.

When building a drink, Maul wants each cocktail to contain three “notes”—“three notes build a chord,” he said—a high note, low note, and middle note. This isn’t unfamiliar territory. In the perfume industry, top notes, middle notes, and base notes often refer to the time after applying a perfume that the scents can be perceived. A top note comes fast and quick; a base note is long and lingering, providing depth.

For example, Maul serves a drink called a Reviver, in which he freezes sherry on the bottom of the glass before adding a mixture including gin, sweet vermouth, and clarified lime juice. There’s a low, bitter note in the vermouth, while the sherry is a high note that comes out after it melts from the warmth of your hand holding the drink. “When you’re looking at alcohols, every flavor has a very real note to it. I always tag those notes to music.” Maul thinks of rhum agricole, for example, as a high bright note—“a high C.”

His customers are participating in a song as they drink, continued Maul. “That’s the effect of it for us. There is a beginning, middle, and end.”