Turning the March into a Movement

Two professors—Jeremy Pressman from the University of Connecticut and Erica Chenoweth from the University of Denver—conducted a detailed accounting of press and other reports from rallies in over 500 cities and towns across the country. Their conclusion so far: between 3.3 and 4.6 million Americans took to the streets. Despite the remarkable turnout, the question remains whether it heralds the beginning of a new “resistance” movement that can thwart Trump’s agenda . . . 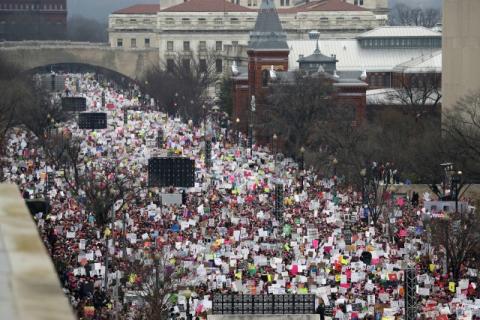 First, it was the largest one-day protest in American history. Based on news reports from cities around the country, as many as 4.5 million people took to the streets. From 750,000 people in Washington, D.C., and Los Angeles to 250,000 in Chicago, 60,000 in Atlanta, 26,000 in Des Moines, and 271 in Morris, Minnesota (with a population of 3,500 and only two stoplights), protesters took over America on Trump’s second day in office.

Second, the protest completely dominated the news on a day when a newly elected president normally is basking in good press. This is a real defeat for a thin-skinned man who lives off dominating news cycles. The front-page headlines in most newspapers focused on the marches in their local cities and around the country. Many papers had no front-page stories at all about Trump’s first day as president. Those papers that did report on Trump focused on his rambling rant at the CIA. The reporters let readers know that Trump lied about the crowd size at the inauguration—a falsehood repeated later that by his press secretary Sean Spicer and his advisor Kellyanne Conway, who described those lies as “alternative facts.”

In contrast, media coverage of Obama’s second day on the job in 2009 was almost universally positive throughout the country.

In reporting on Saturday’s protests, many news outlets estimated the size of the crowds in their cities without calculating the total number nationwide. Papers that attempted to gauge the total, like The New York Times, came up several million people short. But two professors—Jeremy Pressman from the University of Connecticut and Erica Chenoweth from the University of Denver—conducted a detailed accounting of press and other reports from rallies in over 500 cities and towns across the country. Their conclusion so far: between 3.3 and 4.6 million Americans took to the streets.

Despite the remarkable turnout, the question remains whether it heralds the beginning of a new “resistance” movement that can thwart Trump’s agenda and help Democrats regain power, or whether it was a one-day act of defiance that will be difficult to sustain.

This was a nationwide protest but it was highly decentralized. It began as a Facebook post. NARAL and Planned Parenthood provided some support, but the march was not directed by paid organizers for national organizations. There was no central slogan or theme. There were few professionally printed signs. In most cities, volunteers found each other via social media or friendship networks and did the grunt work—getting police permits, identifying march routes, recruiting speakers and musicians—necessary to pull off a public protest.

Most of them were first-time marchers, not seasoned activists. Shock over Trump’s election and fear of his presidency inspired them to show up.

The LA rally was diverse in several ways. Although it was a “women’s” march, at least one-third of the participants were men or boys. Perhaps one-quarter of the participants were Latino—not equivalent to their part of the city’s population (48 percent), but still significant. Speakers from Black Lives Matter and other black groups were conspicuous at the rally, and African Americans were well-represented, but not in proportion to their share (9 percent) of LA’s diverse population.

Perhaps most remarkable was the generational diversity. Some came in wheelchairs and even more arrived in baby strollers. There was a large contingent of higher schools, but the vast majority of the marchers were in their 20s, 30s, and 40s—the age group that voted heavily for Bernie Sanders in the primaries, and then supported Hillary Clinton in November. Some of the people we interviewed indicated that Sanders’s campaign was their first experience with activism, and that Saturday was their next involvement in a large-scale political event.

The march exemplified what young activists call “intersectionality” and what older protesters called “multi-issue” organizing. Many of the signs and slogans—“Pussy grabs back,” “women together,” “Girls just wanna have fundamental rights,” and “Get your tiny hands off my uterus”—reflected that this was a women-sponsored rally. But the participants also focused on themes that recognized the links between women’s rights and concerns about widening economic inequality, racial profiling, gun violence, immigrant rights, declining wages, and other matters: “United against hate,” the signs said, “Apathy is not an option,” “Bridges not walls,” “Opinions are not facts,” ”Love Trumps hate,” “Full rights for all immigrants,” “You can’t have my rights—I am using them,” and “No human being is illegal.”

The question going forward is whether this one-day protest has legs. This could be the beginning of a broader movement, but that won’t happen spontaneously. Such a movement would need national leadership and some level of coordination (a la the Tea Party) or it would become like Occupy Wall Street, which created a great slogan and changed the nation’s discourse, but didn’t have the staying power to contest for real political influence.

Marchers in Los Angeles and other cities proclaimed, “This is what democracy looks like.” But democracy isn’t just a display of numbers. The majority only rules when it wins a contest for power, and that requires organization and strategy—what organizer Ernesto Cortes calls turning “hot” anger into “cold” anger.

In movement-building terms, what must be done to keep the marchers involved a month, six months, a year, and two years from now?

Almost everyone we talked to said they had learned about the event via Facebook or other social media. Not one of them indicated that they belonged to an organization—such as a union, church, an environmental or women’s right group, or the Democratic Party—that had contacted them about the march.

People came with their friends, not as part of a contingent of issue organizations or constituency groups. Most of the signs had slogans and drawings, but few had the names of organizations.

The relative absence of such organizational ties at the march demonstrates the enormous pool of unorganized Americans who are available for mass action in the age of Trump. But it also poses challenges for building a sustainable movement for change.

Black churches and historically Black colleges formed the infrastructure that mobilized people during the civil rights movement. Unions have traditionally been the organizational backbone for Democratic Party campaign operations. The fact that the march in Detroit—once a union stronghold, now a predominantly African American and low-income city—attracted only 4,000 reflects the waning influence of these organizations, and helps explain why Hillary Clinton lost Michigan in November.

Some pundits believe that the decline in Americans’ organizational affiliations, identified in Robert Putnam’s 2000 book, Bowling Alone, is not a serious problem because the internet and social media have created new ways to recruit people for political action. Facebook was a major catalyst for getting people—young and old—to the marches in many small cities and towns in red states. It let them know that despite November’s electoral outcome, there are many like-minded people in their community. The huge turnout in college towns and cities with large numbers of young people—175,000 in Boston, 100,000 in Madison, 50,000 in Austin, 11,000 in Ann Arbor, 10,000 in Eugene, Oregon, and 2,500 in Charlottesville, Virginia—reflects the power of this technology.

But social media has its limits as an organizing tool. When we asked marchers if or how they planned to stay connected and involved, most were unsure. Many said that they’d try to learn what’s going on via Facebook. But when it came to staying involved after they returned home from Saturday’s march, they didn’t know what to do or how.

Since the protest march was highly decentralized, the organizers in Los Angeles didn’t create a mechanism to sign up the participants for a listserve (the modern version of a “sign-up sheet”) so they could stay in touch after Saturday. That's unfortunate, because activist groups will need them for follow-up actions over the next few months and years—not just for marches, but for calls and emails to Congress and City Hall, for town hall meetings to demand that local pols create “sanctuary” cities to protect immigrants, for protests and hearings at state capitols to protect funding for Planned Parenthood or fight efforts to roll back environmental protection laws, and for volunteers to canvass and phone bank for progressive candidates.

Howard Dean’s 2004 election was the first to utilize social media to recruit volunteers, raise money, and spread the message. Since then, social media has evolved exponentially.  There is still a digital divide based on age and income, but most Americans are now connected in some way.

But while Facebook and other social media are powerful tools for mobilizing for events or action alerts, they are not as good for building organizational infrastructure to compete for power against corporations currently extending their sway over American government.   Turning a mobilization into a movement requires finding ways that people who want to act can stay connected—in issue organizations, churches, unions, the Democratic Party—for the long haul.

The answer to whether Saturday’s marches were successful won’t be known until Trump and his GOP allies try to pass legislation and appoint Supreme Court and other federal judges. It won’t be known until the four-plus million who took to the streets on Saturday turn out to volunteer for progressive candidates running for local, state, and federal offices in 2018 and to work on campaigns that increase voter registration.

There were many elected officials, labor leaders, and progressive organizers who spoke at the rallies in LA and around the country. But the Democratic Party, the unions, and the progressive issue groups (except for a few national women’s rights groups) played little role in organizing Saturday’s marches. There are, however, hopeful signs. Within days after the march, Planned Parenthood, and other groups held a training session for 2,000 organizers, focusing on how to turn Saturday’s energy into sustained political action. To fully seize the moment, however, the entire progressive movement—including the unions, the NAACP, the Sierra Club, and other progressive groups around the country—need to work collaboratively like never before. They should be staffed up, target key states and cities, and link coordinated issue campaigns and protests with electoral politics.

To make this happen, they need to figure out how to connect with the millions of people who marched on Saturday and the millions more who didn’t but are also ready to fight. In the words of legendary organizer, Fred Ross, Sr., “people power must be visible”—to the Trump administration, Congress, governors, mayors, and the media. That doesn’t mean just being visible at a one-day protest, but over the next months and years.

As union leader Maria Elena Durazo said in her speech at the LA rally, “this is a marathon, not a sprint.” On Saturday, millions of Americans indicated that they are “fired up and ready to go.” But it takes strong organizations and old-fashioned organizing to help them get to where they want to go.