The new figures have just come out, and we are slightly down again. 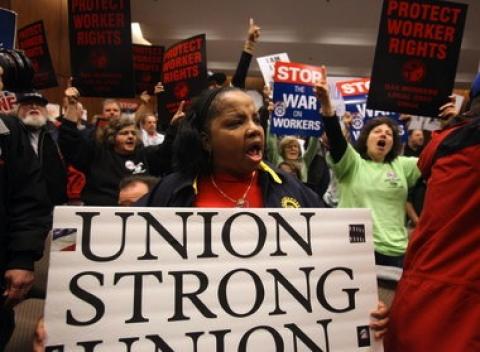 The union membership rate--the percent of wage and salary workers who were members of unions--was 10.7 percent in 2016, down 0.4 percentage point from 2015, the U.S. Bureau of Labor Statistics reported today. The number of wage and salary workers belonging to unions, at 14.6 million in 2016, declined by 240,000 from 2015. In 1983, the first year for which comparable union data are available, the union membership rate was 20.1 percent, and there were 17.7 million union workers.

The data on union membership are collected as part of the Current Population Survey (CPS), a monthly sample survey of about 60,000 eligible households that obtains information on employment and unemployment among the nation's civilian noninstitutional population ages 16 and over. For more information, see the Technical Note in this news release.

Highlights from the 2016 data:

--Workers in education, training, and library occupations and in protective service occupations had the highest unionization rates (34.6 percent and 34.5 percent, respectively). (See table 3.)

--Black workers were more likely to be union members than were White, Asian, or Hispanic workers. (See table 1.)

--Median weekly earnings of nonunion workers ($802) were 80 percent of earnings for workers who were union members ($1,004). (The comparisons of earnings in this release are on a broad level and do not control for many factors that can be important in explaining earnings differences.) (See table 2.)

Industry and Occupation of Union Members

In 2016, the union membership rate continued to be slightly higher for men (11.2 percent) than for women (10.2 percent). (See table 1.) The gap between their rates has narrowed considerably since 1983 (the earliest year for which comparable data are available), when rates for men and women were 24.7 percent and 14.6 percent, respectively.

Among major race and ethnicity groups, Black workers continued to have a higher union membership rate in 2016 (13.0 percent) than workers who were White (10.5 percent), Asian (9.0 percent), or Hispanic (8.8 percent).

The union membership rate was 11.8 percent for full-time workers, more than twice the rate for part-time workers at 5.7 percent.

In 2016, 16.3 million wage and salary workers were represented by a union. This group includes both union members (14.6 million) and workers who report no union affiliation but whose jobs are covered by a union contract (1.7 million). (See table 1.)

For a PDF version of the entire report click here.