Visions Shared from the Left

The rise of authoritarian right wing movements is intensifying the inequality and exploitation of neoliberalism. Key to resistance is building unity around substantive alternatives. This was the theme of a seminar organized by the Forum of Sao Paulo (FSP) and the European Left brought together parties and movements from Europe, Latin America and the Caribbean to discuss visions and strategies for the left. 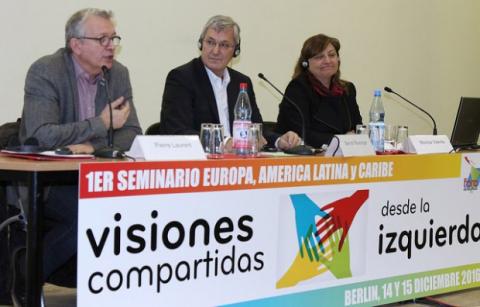 Pierre Laurent: "We need to join all our forces to make prevail the policies of the left"

The Party of the European Left (EL) has been working with the Forum of São Paolo (FSP) for more than 10 years and relations between the two large organizations that bring together the forces of the alternative left in Europe and Latin America and the Caribbean are increasingly strong. The Vice-President of EL and responsible for international relations, Maite Mola, explained how this connection was developed. The result of this growing cooperation was the first seminar of Europe, Latin America and the Caribbean, organized between the Forum of Sao Paulo (FSP) and the EL, on 14  and 15 December in Berlin, on the eve of the 5th Congress of the Party of the European Left.

The title of the seminar "Visions shared from the left" summed up the purpose of the meeting: exchange of experiences and analysis to build political actions that strengthen the struggle of the left, not only in the two continents but also in the left worldwide. The idea was that “it is not enough to resist but it is necessary to offer a vision of the future”. That is why it was pointed that “beyond the reflection we should work in the organization of joint actions” type tax havens and tax evasion, to give an example. And the debate was so fruitful that the seminar closed with the announcement of a second meeting which will be held from 16 to 19 July in Managua, coinciding with the 22 meeting of the Forum of Sao Paulo. It will give a chance to study in depth all topics that were on the table during the two intense days of debate, according to the Executive President of the FSP Monica Valente, who assessed that we must build bridges to develop policies articulated in the two continents. She added that the content of the Seminar was very rich and a good beginning  to continue working together.

Pierre Laurent, President of the EL until that weekend, along with Mónica Valente and Bernd Riexinger, co-Chair of Die Linke, host country, were the ones who opened the seminar. They did so on the basis of an analysis of the international context that included from the consequences of the victory of Trump in the United States to the advance of the far right in Europe and the counter-revolution of the oligarchy in Latin America.

About the victory of Trump, Bernd Riexinger said that is not going to weaken the neoliberalism but that would lead to a capitalism even more neo-liberal and authoritarian in favor of the great capital. A neo-liberalism that is undermining the social democracy in all countries and generates antisocial policies that put the interests of the multinationals on top of the needs of the society.

He spoke about the increasing concentration of wealth, the increase of the polarization and the rise of neo-Fascist forces, which take advantage of the crisis and the discontent of the people to grow up. But Riexinger also underlined the challenges and the opportunities of the left, such as the need to work for credible alternatives that halts the rise of the far right. The way of doing so is from the consensus against neoliberalism and its consequences such as the deregulation, the undermining of public and its austerity policies, said the co-Chair of Die Linke. Riexinger added that it is necessary insist in the classes struggle according to the interests of the workpeople in all the countries and that it does not make sense to go out of the European Union.

The attempt of a conservative restoration

The Executive President of Foro de Sao Paolo, Mónica Valente made a brief introduction of what had happened in Latin America to arrive at current situation. She narrated how neoliberalism expanded in Latin America in the 1990s, with the privatization of State assets, regressive policies and the opening of markets to the United States, as it was the attempt of the FTAA negotiations.

And how at the end of the nineties and the beginning of 2000 the struggles of the resistance, the victories of left-wing governments, the defeat of the FTAA, the foundations for the sovereign and autonomous regional integration, economic growth and income distribution imposed. At that time it was also created the BRICS.

“And now we are -she said- in an attempt of conservative restoration”. She raised if we are before a reorganization of the forces that sustain the neoliberalism and in what direction it goes. She argued that there is a dysfunction between the global advancement of neoliberalism and the increase of popular unrest as a result of these policies. Therefore, she concluded, "we have to organize ourselves and give answers to the people".

Credible alternatives against the rise of the far right

"We are in a period of political reconstruction and we need to join all our forces, from the convergence, to make prevail the political forces of the European left" said Pierre Laurent. He began his speech with an assessment of the situation in Europe. He went back to the Maastricht Treaty, in 1992, whose aim, said, was to create a capitalist market to force marches to serve to the interests of the neoliberalism. The social Europe was left aside to facilitate the social dumping and the competition among the workpeople of the whole Europe.

In 2004 they attempted to constitutionalize the neoliberalism and although it failed when it was submitted to the referendum in France, Netherlands and Ireland, it won with the Treaty of 2007, which was basically the same. Then it came the financial crisis, austerity, cuts, unemployment…and today the EU is fractured and under an institutional crisis, "is undermined by policies of austerity and unemployment and displays increasingly authoritarian" said Laurent.

The left has the responsibility to provide credible alternatives. And these alternatives summarized by Pierre Laurent, were developed in the political document which were presented to the EL Congress, two days later. He also explained that one of the most important ideas of the Congress was the creation of a permanent annual Forum of all the progressive forces in Europe. The Forum, pointed, is inspired in the spirit of unit of the Forum of Sao Paulo, placing the convergence over the divisions.

To achieve the unit inside the diversity

Juan Valdés, of the International Department of the Central Committee of the Communist Party of Cuba, assumed that “the offensive should be responded with offensive". He spoke of how the offensive of the capital tries to reverse the progressive processes in Latin America and how they uses methods of not conventional war, as they are the communication and the culture to the service of a destabilizing and coup rebellious action. And the key to combat the counter-revolution, he stressed, is “to achieve the unit inside the diversity”. He explained two references that on work in Latin America to look for this consensus of the left and to specify it in a program. One is the permanent search of the Foro de São Paulo to articulate a program and strategies of left, above their own differences. The other one is the Declaration of Lima and the proposal to create a common political program that came out of the meeting of Communist parties in Peru. “The international capitalism has a glass roof and it is necessary to know where we have to overturn our denunciations. For that we have to reach an agreement on what we want to denounce".

Concerning to the counter-revolution of the oligarchy in Argentina and Brazil the problem was that as the economic model was not changed, the oligarchies remained intact and now retrieved governments.

The first day of the seminar concluded with a presentation by Enrique Santiago, juridic advisor of them FARC in the Peace negotiation, of the background, context and development of the peace process in Colombia, displaying also the road-map for the next months. He emphasized the responsibility of the left to follow closer and support the process of the implementation of the adopted agreements.