What Made the Great Recession ‘Great’? 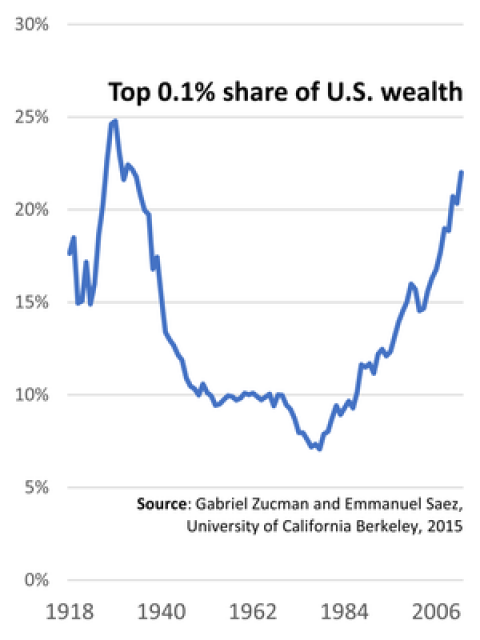 Another new study on the devastating impact of the Great Recession — on the middle class — has just come out, this one from the Hudson Institute, a conservative-leaning think tank.

America’s richest 10 percent, this latest analysis shows, lost 7 percent of their wealth between 2007 and 2013. The bottom 90 percent lost 22 percent, over triple the top 10 percent loss.

The Great Recession essentially wiped out virtually every cent of the new wealth that middle class households had added between 1983 and 2007.

In the earlier of these two years, the typical American household held, after adjusting for inflation, a modest net worth of $80,200. By 2007, this net worth had grown to just under $136,000. The Great Recession knocked that total back down to $81,400.

Middle-class household income shows the same basic pattern as household wealth. Typical families, again after adjusting for inflation, took home $48,000 in 1983, then only about $46,000 in 2013.

By any yardstick, the Great Recession dealt households in America’s economic middle a devastating blow. The United States has emerged from it, notes the new Hudson Institute study, “noticeably more unequal,” with the nation’s top 10 percent now holding three-quarters of the nation’s wealth.

The authors of this other new research — economists Kurt Mitman of Stockholm University, Dirk Krueger of the University of Pennsylvania, and  Fabrizio Perri of the University of Minnesota — have all immersed themselves in that pre-Great Recession inequality. They’ve crunched the data from a national University of Michigan survey of 5,000 American families that’s been ongoing ever since 1968.

This survey’s figures show that American household inequality had, by the eve of the Great Recession, hit a “postwar high.” In 2006, the upper 20 percent of U.S. households held a little under 83 percent of the nation’s wealth. The nation’s poorest 40 percent, all combined, held “no net worth at all.”

Americans have witnessed 11 recessions since 1945. Most of them came and went quickly, leaving behind no lasting damage. Most of these  economic downturns also came at a time when the United States more equally distributed the nation’s wealth.

Why should the distribution of wealth make any difference on the severity of an economic downturn? Mitman, Krueger, and Perri have an explanation.

The low-wealth households of the middle 20 percent consumed another sizeable chunk. Together, the households in the nation’s bottom 60 percent in 2006 accounted for just over 40 percent of the nation’s consumption.

But then the economy experienced a “macro shock.” Unemployment rose precipitously, and households started cutting back on their consumption. Nothing particularly unusual there. Households almost always cut back on consumption when an economic downturn hits.

The difference this time? The extent of the cutback.

The deeply unequal America of 2006 had a greater proportion of low-wealth households than the America of earlier postwar decades — and that contrast turns out to really matter.

In an economy with wealth more equally distributed, most households will be able “self-insure” against the calamity of unemployment. They will have enough saved up to weather the loss of a job and income without having to cut back drastically on their consumption.

But in an unequal economy, with so many families with so little in wealth, many households will “have a lesser ability to self-insure.” In this economy, note Mitman, Krueger, and Perri, low-wealth households will start to cut back significantly on their personal consumption once unemployment rates start rising, even if their own family income “has not dropped yet.”

In other words, as our three economists formally put it, “an economy with a large fraction of low-wealth households will experience a sharper reduction in aggregate consumption expenditures in response to a given macroeconomic shock.”

This trio of researchers can back up that conclusion with a wealth of complex analysis. But we can keep things simple. America’s two worst economic catastrophes of the last century — the Great Depression and the Great Recession — each came right after America’s wealth had significantly and ferociously concentrated at the nation’s economic summit.