The Muslim Ban and Beyond: Fighting White Power in Trump’s America

Of the hatred and bigotry currently on display, Haitian-American physician Jonel Daphnis, said, “It’s always been like this. It’s just that instead of cursing us out quietly, now they’re emboldened to curse us out loud. Now we can’t keep up delusion as a way of maintaining our mental and spiritual well-being. It’s out in the open." 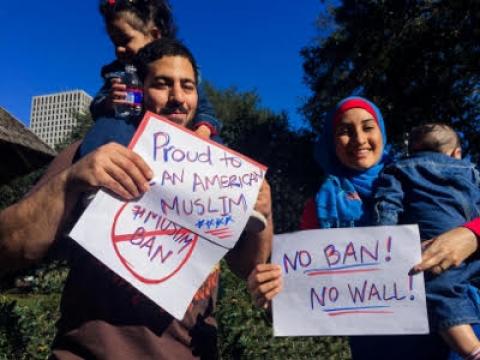 Tamir Mustafa, Joan Rodriguez, and their children. Mustafa said, "What makes America great is everybody in it." , Melissa Cox

The march against Trump’s Muslim ban in New Orleans, on January 29, concluded at the towering Robert E. Lee monument. Below the Confederate general, the circle bearing his name gives way to wide, oak-lined St. Charles Avenue, the central boulevard of white, elite culture. Lee’s statue is targeted by the Take ‘Em Down NOLA coalition, which demands that all monuments to white supremacists be deconstructed. (Read more and sign the petition here.)

A New Orleanian in hijab had marched to Lee Circle next to her two young children, one of whom held a sign reading, “I register only to go to school.” His little sister carried a placard lettered with, “What did I do?”

Along the route, the family had passed a pedestrian who shouted, “Go back to where you came from!”

Of the hatred and bigotry currently on display, Haitian-American physician Jonel Daphnis, said, “It’s always been like this. It’s just that instead of cursing us out quietly, now they’re emboldened to curse us out loud. Now we can’t keep up delusion as a way of maintaining our mental and spiritual well-being. It’s out in the open."

“It’s about white supremacy. Always has been.”

A quiet smile is how Seun Adebola, a twenty-something Nigerian cellular microbiology student in New Orleans, responded to my statement of amazement about the number of white people who had voted for Trump.

I knew what his smile meant. “Where have you been?”

Where a lot of us have been is living the lives of white, straight, US-born, economically comfortable people who have benefited all the way along from skewed systems. This is true even for many working to challenge those systems.

White supremacy goes far beyond individual hatred, or fear, or mistreatment of people of color.  (For a  brilliant explication of white supremacy, see this by Chicana feminist writer and organizer Elizabeth “Betita” Martínez). Dominant political, economic, and social structures have accrued and reproduced the white power across the centuries.

That structural power is so strong that it has eroded democracy and rights to the point that Trump has the key to the White House despite the majority not having cast their ballots for him, and despite huge numbers of people of color having been excluded from casting any ballot at all. The disenfranchisement has come through such vehicles as mass incarceration of African-Americans in a new Jim Crow, and the Crosscheck system of purging voters, mainly of color, from lists. Institutionalized white power has also created the ongoing crises under which so many resource-poor, rights-deprived, and socially excluded people live.

Scholars and activists reaching back to W. E. B. Du Bois, their numbers growing rapidly since the 1990s, state that the problem is not white supremacy; the problem is the social construct of the white race itself. In his book released three days before Trump’s inauguration, Tears We Cannot Stop: A Sermon to White America, Georgetown professor and Baptist minister Michael Eric Dyson writes, “You don’t get whiteness from your genes. It is a social inheritance that is passed on to you as a member of a particular group.”

The 1993 Race Traitor manifesto reads, “The white race consists of those who partake of the privileges of the white skin in this society.” The race construct is held in place across time and space by all of us who remain willing to accept the entitlement that our whiteness gives us.

We who think we are white need only do nothing, or not enough, and whiteness and its power will course right along. So will homophobia, patriarchy, xenophobia, and economic inequity, because the same structures keep them alive and well, too.

Anyone who doesn’t feel some part of their soul killed, or doesn’t at least feel very uncomfortable, by being part of whiteness in Trump’s imagined white America is on the wrong side. We have the opportunity to use our discomfort as a further motivating and unifying force to subvert whiteness, thereby advancing justice, equity, understanding, and compassion.

We cannot be afraid to be radical. The times demand nothing less.

If the idea unnerves us, we can consider what Martin Luther King wrote in Letter from Birmingham City Jail: “I have almost reached the regrettable conclusion that the Negro's great stumbling block in the stride toward freedom is not the White Citizen's Council-er or the Ku Klux Klanner, but the white moderate who is more devoted to ‘order’ than to justice; who prefers a negative peace which is the absence of tension to a positive peace which is the presence of justice..."

On Being a White Race Traitor

James Baldwin famously said that, “As long as you think you are white, there is no hope for you.” Those of us with privilege, access, and power that we gain from claiming whiteness can, instead, strive to be excellent traitors to the white-race construct and the power it conveys.

“Active racists” - and, we can add, active race traitors - “are the ones who are walking with the direction the treadmill is going, passive racists are those who are standing still but nevertheless are being moved in the direction the treadmill is going, and active non-racists are walking in the opposite direction,” wrote  Beverly Daniels Tatum, psychologist and former president of Spelman College

Walking in the opposite direction means challenging the Muslim ban and all presidential acts of identity zealotry, of course. Yet creating a new status quo doesn’t just mean changing the problems out there. It also means questioning ways that each of us who believes she or he is white may be letting unjust action and inequitable power slip by because they reinforce our narrow self-interest. It means, additionally, calling out and challenging the words, actions, and inequities which perpetuate white power and whiteness.

We can open our eyes and ears to what we normally fail to notice around us. We can sharpen our attention and relearn by watching and listening to people of color more, letting go of our defensiveness and fear to really see and hear. We can struggle hard to root out the propaganda and misinformation we’ve gotten from school, church, the government, and other institutions. We can shut out the corporate media which endlessly reinforce white power, and instead become more accurately informed through news sources like The Root, Color Lines, Democracy Now, Truthout, Common Dreams, and Yes Magazine. We can read normally suppressed histories, truths, and perspectives, such as through the Zinn Education Project and the superb book by Ta-Nehisi Coates, Between the World and Me.

We can talk about race, power, and privilege, a lot. For us ostensibly white people, we need to make the choice to do this because - unlike everyone else - we have the liberty of not talking about race if we don’t want to. Seun Adebola’s take on it is, “Whites need to get over their aversion to discussing race critically. Critically means de-white-supremacizing their minds. The starting point of any such conversation should be ‘I am racist’, and proceed from there.”

There is much that white race traitors can do to be noncompliant citizens in a presidency, country, and world based on systemic racism. A great place to start is to promote the broad-reaching political platform compiled by the Movement for Black Lives amongst our schools, communities, churches, and synagogues. We can also organize with groups like Showing Up for Racial Justice (SURJ), an anti-supremacy group for white people.

Other things we can do: Join those who, throughout Trump’s first days in office, have taken their children to demonstrations. Discuss politics with our neighbors or the next person in line at the grocery store. For middle and high school teachers, use Resistance 101 in our classrooms. Pull over or stop walking and start filming whenever we see cops confronting people of color and others under attack, using the Mobile Justice app if possible. Be active bystanders in attacks on people of color, Muslims, women, or immigrants. Work for US foreign policy which reinforces, not destroys, the rights, security, and self-determination of people of color and resource-poor people everywhere. Responding to action alerts is good, but clicking that button should be the start of our activism, not the end.

A fundamental principle of all our work should be to follow the strategic lead of communities of color, Muslims, Native Americans, women facing oppression, LGBTQ people, progressive Jews, and others who are now in the crosshairs. Check out Black Lives Matter, Incite, Standing Rock, Indigenous Environmental Network, Audre Lorde Project, Fierce, the US Campaign for Palestinian Rights, Sound Vision, Jewish Voice for Peace, and T’ruah. These are only a few of many wonderful organizations who can help us in our path.

The Imperative for Collective Survival

My neighbors Anthony and Fenton, brothers aged 7 and 8, and I had a sidewalk conversation about Trump’s victory one evening. The boys were nervous because they had heard that Trump hated Black people; they wanted to know whether this was true. I told them that all evidence indicated it was. They deliberated for a few minutes, and then Anthony said, “Well, our dad is white, and our mom and grandma are Black. So he would hate our family.” The two then discussed safety tactics with each other, concluding that they needed to convince their family to move to Mississippi or Florida.

Their plan was so touching that I hated to break the bad news: Trump’s power extended to those states, too.

People with whiteness and power need to do more than we’ve ever done to up-end the daily practices, laws, ideologies, and policies which render even little kids frightened. We must join forces across color lines, and across religious and nationality lines, and rebel more and better.

Many thanks to Seun Adebola, Sarah Knopp, Moira Birss, and Neil Tangri for their input.

Beverly Bell has worked for more than three decades as an advocate, organizer and writer in collaboration with social movements in Latin America, the Caribbean, Africa and the US. Her focus areas are just economies, democratic participation and gender justice. Beverly currently serves as associate fellow at the Institute for Policy Studies and coordinator of Other Worlds. She is author of Walking on Fire: Haitian Women's Stories of Survival and Resistance and of Fault Lines: Views Across Haiti's Divide. She is also a member of Truthout's Board of Advisers.