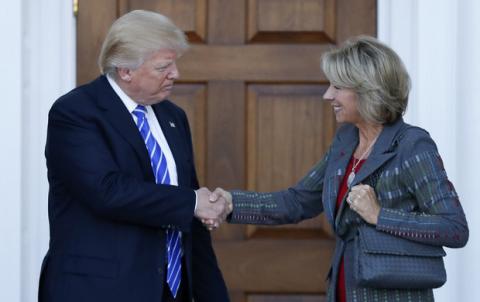 1. 5 Lessons for the Trump Resistance from Betsy DeVos Contentious Confirmation

The Democrats' last best chance for defeating a Trump cabinet nominee went down to defeat on Tuesday when Vice President Mike Pence cast the tiebreaking vote to approve the nomination of Michigan billionaire Betsy DeVos as Secretary of Education.

With Republican senators Susan Collins of Maine and Lisa Murkowski of Alaska on record as opposing DeVos’ nomination, the Democrats needed one more Republican vote to defeat DeVos, an advocate of channeling public education dollars to for-profit charter schools and vouchers for religious schools. But they fell short.

Even Arizona Republican Jeff Flake, a harsh critic of Trump during the 2016 campaign, supported DeVos. As Slate’s Jim Newell notes, no Republican senator was willing to serve as the target of the president’s dyspeptic Twitter blasts for the next two years.

Nonetheless success of DeVos’ opponents in peeling off Collins and Murkowski—and the failure to secure any others—holds lessons for the burgeoning opposition to the Trump administration, and not just in education policy.

1. Without Republican support, the anti-Trump movement cannot defeat the most extreme manifestation of Trumpism on Capitol Hill.

This is an obvious point but one that is worth repeating. While nominations of retired general James Mattis and Exxon CEO Rex Tillerson were controversial, those men could fairly be described as competent to run the Defense and State Departments respectively. DeVos, who has never attended or enrolled her children in a public school, does not even pass that minimal test. Yet she was confirmed.

2. The message of the anti-DeVos movement was broader than the center-left of the Democratic Party, and its message wasn’t particularly tied to Trump.

As Emma Brown of the Washington Post put it, DeVos’ nomination was imperiled by a “popular uprising” that was broader than partisan opposition to the choice of a Republican president.

DeVos' opponents were politically diverse. DeVos was, of course, opposed by the two big teacher’s unions. But she was also opposed by Democrats for Education Reform, a group that has criticized the teacher unions. She was opposed by the American Association for People With Disabilities as well as hundreds of graduates of Calvin College, a Christian school in Michigan where DeVos received her degree.

3. The message that prevailed in Alaska was non-partisan and targeted the senator's local offices, not Washington, D.C.

"She has no experience with public schools, that's number one," said Becca Bernard, a member of Great Alaska Schools, a nonpartisan coalition that advocates for public education and helped stage a protest of 200 people at Murkowski’s office in Anchorage.

The director of Murkowski’s state office told Alaska Dispatch News that the campaign against DeVos marked the first time he's seen outside campaigns encouraging people to call the senator’s local offices. “One of our state offices guessed they received over 150 calls in one day, and all but a couple were from out of state," he said.

4. Republican opposition to Trump may be more symbolic than substantive.

Collins and Murkowski could have killed DeVos' nomination by voting against her in committee and chose not to do so. The rewards of making a show of opposing Trump were balanced by the benefits of not killing his most controversial nomination. To put it another way, the opposition to Trump needs to demonstrate the substantive rewards of bucking the party line. This has yet to happen.

The overwhelming and corrupting influence of money in politics has only gotten worse since the Supreme Court's judicial activism in the Citizens United case. But the influence of money is not always decisive. Murkowski has received $26,200 and Collins $5,000 from the DeVos family, according to OpenSecrets.org. The money did not buy their votes. The Republican senators had interests that mattered more than the money.

These lessons are relevant as the opposition to Trump is now burgeoning beyond the electoral coalition that opposed him during the campaign. Trump is far more unpopular than his Republican predecessor George W. Bush and the opposition is growing far beyond the left-liberal communities.

The legal struggle over his travel ban has been joined by a phalanx of national security officials who pride themselves on bipartisanship and more than 100 technology companies that are loathe to get involved in politics lest they offend some part of their customer base. There is a high-tech company protest planned for March 14 (Pi Day) and a scientists' march on Washington scheduled for April 22.

The ideological and social breadth of the anti-Trump movement is impressive, ranging from the radical left and the liberal left, to the Democratic office holders (whose collective spine has been stiffened thanks to the huge numbers that turned out for the women’s march), to the centrist political elites in Washington, to the #NeverTrump movement of the right, exemplified by independent presidential candidate (and former CIA agent) Evan McMullin and former Bush speechwriter David Frum.

What unites these disparate movements is the conviction that Trump is unfit for office and is building an American autocracy. What divides these movements are political history, orientation, and prescriptions for the most effective way to defeat Trumpism.

The movement that came to the brink of defeating Betsy DeVos harnessed political diversity in the service of a concrete political goal: a Senate confirmation vote. Whether such unity can be forged and amplified in the anti-Trump struggles to come is an open question.

Jefferson Morley is AlterNet's Washington correspondent. He is the author of Snow-Storm in August: Washington City, Francis Scott Key and the Forgotten Race Riot of 1835,  and The Ghost, The Secret Life of CIA Spymaster James Jesus Angleton, to be published by St Martin's Press in the fall of 2017.

As expected, the vote was 50-50, and Vice President Pence was called in to cast the tie-breaking vote.

She was never a student, a parent, an educator or school board member of public schools. It is her life’s work to tear down public education. She does not respect the line of separation between church and state. She supports for-profit charter schools.

She is ignorant of federal law, federal programs, and federal policy. When asked at her Senate hearing about the Individuals with Disabilities in Education Act, she did not know it was a federal law. She had given no thought to lessening the burden of debt that college students bear, which now exceeds $1 trillion. At a time when the federal role in aiding students with the high cost of college needs to be redesigned, she knows nothing about it.

As the ethics counselors for Presidents George W. Bush and Barack Obama pointed out, DeVos has financial conflicts of interest which she refuses to divest. She told the Senate committee that she had no role in her mother’s foundation, which has funneled millions of dollars to anti-LGBT organizations, but her name appears on 17 years of the foundation’s audited tax returns. She told the committee that online charter corporations produce stellar results, but researchers demonstrated with facts that she was wrong.

Choice policies in Michigan have caused the test scores in that state to decline. Detroit, overrun with charters and choice, is a chaotic mess.

It is a sad day for American public education when a person who has repeatedly expressed contempt for public schools is confirmed as Secretary of Education.

But there is a silver lining to this dark cloud. Her obvious lack of qualification for the job has created a maelstrom of protest against her. Senators report that they have never received so much feedback about a cabinet nominee, overwhelmingly negative. Telephone lines were jammed, in some offices, shut down.

The DeVos nomination awakened parents and educators to the dangers of privatization. She personifies the privatization movement. She is the leader of the Billionaire Girls Club, spreading her millions across the land to reward and enrich allies in Congress, on state and local school boards, and in any setting where she could tout school choice as a magical remedy for poor performance. Charters and vouchers, whether for profit or nonprofit, is her sole idea. She has singlehandedly stripped bare the “reform” movement, showing it to be not a civil rights movement but a privatization movement funded by billionaires and religious zealots.

About half the Republican Senators have received substantial campaign contributions from the DeVos family. How else to explain their determination to confirm her regardless of mass protests against her. Hers is the first Senate confirmation vote in history that required the intervention of the Vice President to supply a tie-breaking vote. She enters office with no reservoir of public trust.

Strange as it may seem, the confirmation of DeVos is a victory for those who spoke out against her. We joined with many organizations–People for the American Way, the ACLU, and many more–to say NO. The response was overwhelming. The Network for Public Education generated well over half a million emails.

For those of us fighting back against privatization, Betsy DeVos was a great tool for organizing and mobilizing and informing the public. Had there been one courageous Republican, had DeVos been defeated, Trump would have found another privatizer. And the fight would have started over.

She created the informed public we need to build a strong movement against privatization.

Consider this article that appeared in the Washington Post. The author describes herself as someone who was never interested in politics. Having learned about DeVos, the writer became a political activist.

This is the spirit we need to continue the fight for the future of public schools in America.

Join the Network for Public Education. We shall #Resist!