Steve Bannon's 2009 film, 'Generation Zero', shows a hellishly bleak vision of our past, present, and future, driven by a magical belief in historical determinism. 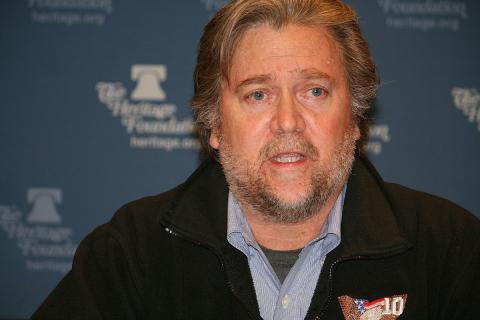 What does Stephen Bannon really believe?

Because he hasn’t spoken much in public since becoming, as Time magazine puts it, “the Second Most Powerful Man in the World”—he’s the president’s influential chief strategist and now a member of the National Security Council’s principals committee—analysts have focused in recent weeks on two main sources as clues to his thinking. The first is a speech he gave via Skype in 2014 to a conference inside the Vatican, where he called on “the church militant” to fight against the “new barbarity” of “jihadist Islamic fascism,” and praised the Tea Party movement as the leading edge of a “center-right revolt” against crony capitalists and the “party of Davos.”

“There is a major war brewing, a war that is already global,” he declared in the speech, the transcript of which was helpfully published by Buzzfeed. “Every day that we refuse to look at this as what it is, and the scale of it, and really the viciousness of it, will be a day where you will rue that we didn’t act.”

A second source of Bannon’s thinking, mined most recently by reporters at USA Today and The New York Times, have been his comments on a daily radio show he ran as part of his Breitbart Newsempire until taking over the reins of Trump’s presidential campaign last summer. In these programs, Bannon’s ideas often appear as the premises for questions that he poses to his interviewees. For example, in March 2016, he asked author Lee Edwards, “We’re going to war in the South China Sea in five to ten years, aren’t we?” Talking to his Breitbart colleague Thomas Williams, he made reference to “an expansionist Islam,” “an expansionist China,” and a “Judeo-Christian West on the retreat.” In December 2015, he told anti-immigrant activist Rosemary Jenks that “most people in the Middle East, at least 50 percent, believe in being Sharia-compliant” and that for those people “the United States is the wrong place for you.”

These statements tell us much about what Bannon believes, but to form a complete understanding of his worldview—if you want to understand why he has such a dark appraisal of the world and where he wants to take the United States—turn to his work as a documentary filmmaker. Before he joined Breitbart News as a founding member of its board, Bannon made several documentaries as both producer and chief writer, including In the Face of Evil: Reagan’s War in Word and Deed(2004), Fire from the Heartland: The Awakening of the Conservative Womanand Battle for America (both 2010), The Undefeated (about Sarah Palin, from 2011), and Occupy Unmasked (2012), a piece of agitprop that tried to defame the Occupy movement as a conspiracy spawned by groups as disparate as the Earth Liberation Front and the Black Panther Party.

As their titles suggest, most of these films are hymns to the Republican idols of Reagan, Palin, and the Tea Party, or attacks on the left. But there is one Bannon production that deserves more attention for what it explains about his underlying worldview: his 2010 movie Generation Zero. In 90 minutes of often lurid images from the last hundred years of world history, interspersed with interviews with a seemingly never-ending array of conservative intellectuals, nearly all of them white men, Bannon’s script offers a coherent and hellishly bleak vision of our past, present, and future, driven by a magical belief in historical determinism.

The films centers on the banking collapse of 2008, pivoting backward and forward in time to offer an explanation for its cause and to dramatize its effects. Bannon opens with the hapless House Financial Services committee member Paul Kanjorski being berated on C-Span by an angry taxpayer and Kanjorski admitting his lack of financial acumen; meanwhile, images of nuclear bombs exploding and planes crashing punctuate the narration. Whom does Bannon blame for the financial collapse? “A toxic combination of big government in bed with Wall Street” birthed by the permissive culture of the 1960s. But this permissive culture itself, Bannon posits, was generated by a prior generation that was traumatized by the slaughter of World War II, and thus shielded its children from the harsh realities of the world, producing their lax moral standards and self-centeredness.

To Bannon, and the parade of conservatives he marshals to make his case (Newt Gingrich, Heather MacDonald, Roger Kimball, Michael Novak, and Shelby Steele all get lots of face time), the rebellions of the 1960s were all rooted in the baby-boom generation’s narcissism. Not once do racism or the Vietnam War appear as possible causes for mass movements for social change or human liberation. Instead, the left—represented by organizer Saul Alinsky and academics Frances Fox Piven and Richard Cloward—is blamed for manipulating the children of the 1960s into believing that American society was evil and that disruption of the status quo was moral. Only if you ignore the proximate causes of protest, like racism or war, can you make this sort of intellectual leap. But Bannon is just warming up.

One quarter of the way into Generation Zero, the filmmaker unveils the deeper theory that guides his thinking: the notion of generational turnings popularized by authors Neil Howe and William Strauss in their books Generations: The History of America’s Future (1991) and The Fourth Turning: An American Prophecy (1997). According to Strauss and Howe, roughly every 80 years—a saeculum, or the average life-span of a person—America goes through a cataclysmic crisis. Marked by savagery and genocide, and lasting a decade or more, this crisis ends with a reset of the social order and its survivors all vowing never to let such a catastrophe happen again. Each of these crises, Strauss and Howe posit, have been formative moments in our nation’s history. The Revolution of 1776–83, followed roughly 80 years later by the Civil War, followed 80 years after that by the Great Depression and World War II.

Inside each 80-year saeculum, Howe and Strauss argue, there are four turnings, each a generation long, and each as inevitable as the coming of the seasons. In the first turning, for the generation that survives the prior catastrophe, the newly restored society reaches a collective apex of social order and economic power. Think of America in the post-war boom of 1945 to 1965. Then comes the awakening, as the first new generation of post-catastrophe children enter adulthood and, unlike their traumatized parents, let loose with their emotions and take risks that their forebears would never have imagined. Hello to the long 1960s. Then comes the unraveling, as the once robust order starts to fall apart, people question the eternal verities and institutions weaken. The fourth turning is kicked off and punctuated by ongoing crises, out of which a whole new order is born.

Strauss and Howe are essentially pop historians—there’s just enough in their framework to make it seem compelling, but nothing that you can prove or disprove with any assurance.

But that doesn’t bother Bannon. Having established this seductive narrative framework, Bannon devotes the rest of Generation Zero to bearing down relentlessly on the decades of the unraveling, which in his mind are the years from 1987 to 2007. As a propagandist, he has two purposes. The first is to make his viewers clearly understand who are the victimizers and who are the victims; the second is to use that framing to help shape the new societal order that will come, as he believes, after the fourth turning plays itself out.

To convince his audience that liberals and hippies are to blame for the financial depredations of the last 20 years, Bannon trots out conservative economists like Amity Shlaes and Arthur Brooks, who have long argued that the New Deal didn’t save the American economy but simply entrenched big government and made it an enemy of the hard-working entrepreneur—or, as Shlaes phrases it, anticipating Trump, “the man who pays, the man who prays, the man who is not thought of, the forgotten man.” The economic crisis of 2008 didn’t happen because of the massive deregulatory push of the 1980s and 1990s, Generation Zero suggests; it happened because big government and big business got in bed together, and the establishments of both the Democratic and Republican parties became the “Party of Davos.”

Bannon has a point. Under Presidents Bill Clinton and George W. Bush, there was a Washington consensus in favor of globalization, free trade, deregulation of Wall Street, and the financialization of the economy.

But Bannon, as we know, isn’t just an economic populist. He is also a racist, which leads him, in the next part of the “unraveling” narrative, to blame the housing bubble and the sub-prime loan crisis on the civil-rights movement and efforts to address redlining. Because “white Americans have been in a position where they constantly have to prove that they are not racist. It is that phenomenon of white guilt is what pressures people in the government to say things like ‘everybody has a right to a house,’” his narrator opines. Banks supposedly loosened their standards for loans because of the Community Reinvestment Act and ACORN, but “unfortunately capitalism doesn’t work that way,” and thus the crash of 2008 was the fault of liberals and blacks.

In a Time magazine article published shortly after November’s election, David Kaiser explains why this is so chilling. Bannon had sought to interview him for Generation Zero because he is one of the few professional historians who have taken Howe and Strauss’s work seriously. As he writes, “My own interpretation of [their work] is that the death of an old political, economic and social order creates an opportunity for any determined movement or leader to put a new vision in place.” The Republican Party, he says, has such a vision, while the Democrats have been more concerned with protecting the achievements of the New Deal.

But Bannon, Kaiser says, had more on his mind than merely rolling back the legacies of Democratic presidents from Barack Obama to Lyndon Johnson and Franklin Roosevelt. He writes:

Bannon had clearly thought a long time both about the domestic potential and the foreign policy implications of Strauss and Howe. More than once during our interview, he pointed out that each of the three preceding crises had involved a great war, and those conflicts had increased in scope from the American Revolution through the Civil War to the Second World War. He expected a new and even bigger war as part of the current crisis, and he did not seem at all fazed by the prospect. I did not agree, and said so. But, knowing that the history of international conflict was my own specialty, he repeatedly pressed me to say we could expect a conflict at least as big as the Second World War in the near or medium term. I refused.

Bannon doesn’t just believe that we are in an existential conflict with Islam or with China. It seems he wants to exacerbate those conflicts into a new world war. As a believer in Strauss and Howe’s theory of history, Bannon fantasizes that he can use that cataclysm to forge a completely new order. He is now in a position to make that a reality.

[Micah L. Sifry, a former Nation associate editor, is co-founder and executive director of Civic Hall and the author of The Big Disconnect: Why the Internet Hasn’t Transformed Politics (Yet).]