Israeli Interference in US Politics: A Conspiracy in Plain Sight

U.S. policymakers and the major media are embroiled in a heated debate over the purported Russian meddling in U.S. politics, but Israeli interference in U.S. politics is the conspiracy in plain sight that no one talks about. Israel intervenes in U.S. domestic and foreign policy all the time, but it never is a scandal. The reason is simple. The U.S. Congress, Republicans and Democrats alike, and the major media, including the so-called liberal media, are all complicit. 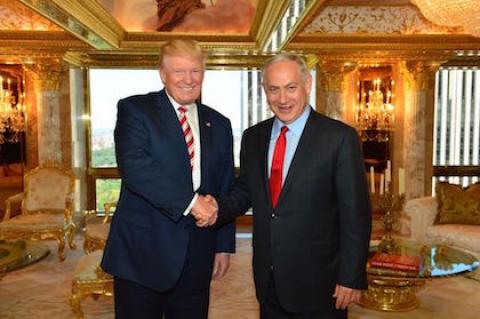 President Donald Trump and Israeli Prime Minister Benjamin Netanyahu. Netanyahu’s blatant meddling in U.S. politics has even been encouraged by some lawmakers., Trump for President

I completely believe that Donald Trump was in bed with the Russians before the election and the campaign may well have intrigued with Vladimir Putin with respect to Wikileaks and that helped defeat Hillary Clinton. I believe that because that’s how the world works; because a lot of very smart people in the liberal establishment believe it; and because the New York Times and Washington Post are documenting some of it, with the fervor of Watergate.

Maybe it will bring the liar in chief down some day and end this short national nightmare. I certainly hope so.

But there are two large exceptions to the Russian conspiracy. The first is that it is good policy for the United States to be talking to Russia. If Clinton were president today, there might be dogfights over Damascus. Her gang was all for regime change in Syria, and for confrontation over the Ukraine. That’s bad policy. I’m glad they’re not running the show– though they are certainly running this story. Before you get too upset about Russia winking at the sanctions, the scandal that brought down Michael Flynn, please recall that in 2012, President Obama sent secret signals to Iran to ignore congressional sanctions, we’ll be talking to you once I’m reelected. Obama got reelected; and his deal with Iran is one of the greatest achievements of a very good presidency. Again, this is how the world works.

Which brings up the second exception. Israel tried to interfere in that 2012 election, as Chris Matthews sensibly reminded his audience recently: Benjamin Netanyahu tried to help Mitt Romney beat Obama. Sheldon Adelson held a fundraiser in Jerusalem for Romney.

Netanyahu didn’t stop there. After Romney lost, Netanyahu came to Congress to tell the Congress to reject President Obama’s nuclear deal. That was an unprecedented interference of a foreign leader in our policy-making, enabled by the Israel lobby; but there were never any investigations about that. Subsequently Chuck Schumer said he was torn between a Jewish interest and the American interest, before voting against the president, and he paid no political/reputational price for it; while President Obama said that it would be an “abrogation” of his constitutional duty if he considered Israel’s interest ahead of the U.S.; for which Obama was called an anti-semite.

Throughout those negotiations, Obama could never address the fact that Israel has nukes. This lie is honored by the press, in a way that it would never honor Trump’s lies. And the manner in which Israel got nukes, including thefts from an American company with the complicity of the White House, is only investigated by peripheral figures.

The Israeli interference in our politics is the conspiracy in plain sight that no one in the media talks about because they’re too implicated themselves. The two top executives at the largest media company, Comcast, are pro-Israel; one of them, David Cohen, raised money for the Israeli army. Netanyahu’s speeches to Congress were written by Gary Ginsberg, an executive at another media company, Time Warner, but hey, that’s not an issue. Four New York Times reporters have had children serve in the Israeli army. One of them is columnist David Brooks, who says that he gets gooey-eyed when he visits Israel. He is one of several Zionists with columns at the Times. Tom Friedman justified the Iraq War because suicide bombers were going into Tel Aviv pizza parlors. (Huh?)

Yesterday Martin Indyk said on National Public Radio that Jared Kushner’s strong Jewish background was an asset for his being a Middle East mediator, a job that Aaron David Miller, who also has a strong Jewish background, defined as being Israel’s lawyer. Indyk, himself a mediator, started a pro-Israel thinktank with Haim Saban, an Israeli-American who was Clinton’s biggest funder and who lately smeared Keith Ellison at a giant gathering at Brookings, which he also helps fund, as “clearly an anti-semite” and “anti-Israel;” and Jake Tapper of CNN moved on to the next question, presumably because smearing a public official in that manner is not news. Saban is also chummy with Jeffrey Goldberg, one of whose qualifications for being the best journalist in his generation, according to the Atlantic’s publisher, is that he served in the Israeli Defense Forces, because he felt that America was unsafe for Jews. One of Goldberg’s first hires as editor at the Atlantic is Julia Ioffe, who hates Russia, and who told a synagogue audience last year after she was attacked as a Jew by Trump supporters: “Personally I was kind of glad to see the outpouring of antisemitism” because people had forgotten that Jews and Israel are the “underdog.” At another NY synagogue, believing that he was speaking off the record, Dennis Ross, the longtime White House “mediator” of the peace process, said that American Jews must be “advocates” for Israel, not for Palestinians. Again, not a scandal. But when Rashid Khalidi, who wrote a book about the U.S. being imbalanced in the peace process, warned that neoconservatives would “infest” the Trump administration, he was smeared up and down as an anti-semite.

I could go on and on. I can’t because Netanyahu is in the White House today, and I need to get on the news. Netanyahu who President Obama met with countless times, Netanyahu who John Kerry talked to as secretary of state four times as often as he spoke to (Russian) Foreign Minister Sergey Lavrov. Which is hardly surprising, because as Kerry complained to Jeffrey Goldberg, we give Israel more military aid than we give the rest of the world combined, and meantime they ignore our warnings. They can ignore us because of the Israel lobby, including AIPAC, the American Israel Public Affairs Committee, which doesn’t have to register as a foreign agent because of sleight-of-hand they pulled back in the 60s, defying Senator Fulbright.  AIPAC never gets called for this because the two countries are viewed to have completely congruent interests– when we don’t. So Phil Gordon leaves the State Department and goes to a conference in Israel just like Super Bowl winners going to Disneyland; all the Israeli ambassadors grew up in the States; and Benjamin Netanyahu came of age here, a subject that is never considered problematic; because we have a political discourse in which a leading liberal journalist, Eric Alterman, brags: “I was raised dually loyal my whole life.”

Alterman told a Jewish audience in New York he was alright with that because the U.S. can take a hit but Israel can’t. He then conceded that “bin Laden and 9/11 were to some degree inspired by U.S. support of Israel,” and so are the “pool of potential terrorists who want to attack the United States.” Though: “Dammit, if that’s the price we have to pay, then I’m willing to pay it.”

Other Americans may make a different calculation of U.S. interests. But let’s talk about Russia.

[Philip Weiss is Founder and Co-Editor of Mondoweiss.net. See other posts by Philip Weiss. Annie Robbins contributed to this story, particularly on the 2012 Iran/Obama detail.]