Instead of demonstrating outside of Planned Parenthood, Joyce Arthur, executive director of Abortion Rights Coalition of Canada (ARCC), suggests demonstrating outside a "crisis pregnancy center" -- one of the fake clinics run by ideologically extreme religious groups -- or at the office of a local anti-choice group. Also on her list are public areas like city hall. 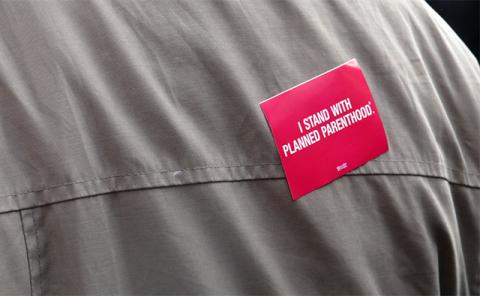 A demonstrator wears a sticker in support of Planned Parenthood at a rally in New York City on February 26, 2011. , Charlotte Cooper

The Pro-Life Action League (PLAL), the organization whose founder created the so-called "sidewalk counseling" methods used by anti-abortion activists to harass reproductive health care clinics and their patients, joined with Citizens for a Pro-Life Society and Created Equal to spearhead a national day of picketing targeting Planned Parenthood locations around the country on February 11.

Reproductive rights and justice supporters naturally rallied in response to show their local clinics and Planned Parenthood as a whole that they support the vital health care they provide. However, while providers and staff appreciate the good intentions, they largely implore people not to "counter-protest" outside their facilities during hours of operation, as patients often cannot distinguish between picketers and supporters. For those looking to get involved in supporting Planned Parenthood -- or reproductive health care clinics in general -- a number of other, more helpful strategies are available.

Emboldened by cabinet appointments like the nomination of extremist Rep. Tom Price (R-Georgia) to head the US Department of Health and Human Services and the use of executive orders to make good on campaign promises to attack reproductive health care programs and abortion access, abortion rights opponents are taking aim at the most visible provider -- Planned Parenthood -- for a nationwide day of protests. More than 70 anti-abortion groups, calling themselves the #ProtestPP Coalition, have come together to target over 200 individual clinics in nearly every state Saturday, February 11.

The #ProtestPP Coalition cites the deceptively edited and widely debunked videos distributed in 2015 by anti-choice group the Center for Medical Progress as its motivation:

#ProtestPP is a coalition of state and national pro-life groups calling for public protest in response to the recent horrifying revelations that Planned Parenthood has been involved in the illicit trafficking of aborted babies' body parts.

The harassment will last beyond Saturday, essentially extending the annual 40 Days For Life heightened picketing season (set this year for March 1-April 9). The group is taking donations processed by the PLAL with plans to continue operating by recruiting and training new "protest leaders," creating signs and banners, and working with the media.

Off-Site Protests Are Better Than Counter-Protesting Outside Clinics

Meanwhile, reproductive justice advocates urge those moved to show their support for their local clinics to resist the temptation to "counter protest" in opposition to the #ProtestPP demonstrations.

Lawyer David Cohen, an Abortion Care Network board member and co-author of "Living in the Crosshairs: the Untold Stories of Abortion Terrorism," told Truthout that unless a clinic asks for a counterprotest, rallying on site is "a terrible idea."

Cohen suggests checking out each clinic's website, as most have ways for community members to volunteer, and also encourages people to rally in visible public places or at the offices of legislators who will be part of the decision about whether to defund Planned Parenthood nationally.

"While the intention of pro-choice groups is to support patients, clinics and escorts, counterprotests on the clinic sidewalk often adds to the chaos," said Ulisano, who is the founder of the Clinic Vest Project, a nonprofit that provides free resources to escort groups across the US and Canada. "Patients really do not have all that much time to read signs and differentiate between anti-choice protesters and pro-choice counterprotesters," she told Truthout. "All patients see is a large group of folks with signs standing out in front of the clinic, which they more than likely will assume are anti-choice protesters."

A number of providers and clinic staff who spoke with Truthout expressed similar concerns. In areas where anti-choice picketers spread out, chase down patients, yell loud enough to be heard in procedure rooms and/or for quite a distance from the clinic, and intentionally confuse patients by wearing the same vests that escorts wear (making it visually unclear who in the crowd can be approached for help amid the chaos), even low-key counterprotests can heighten tension and make entrances less safe for patients and staff.

Ulisano and others who spoke to Truthout made it clear that they are not against demonstrations -- far from it. They simply recognize that their focus is on providing quality, compassionate care.

Planned Parenthood of Illinois's manager of external affairs Julie Lynn told Truthout that patient and staff safety is their "number one priority."

"These patients are coming to Planned Parenthood to receive health care, not to make a political statement, and they should be able to do so safely and without walking through a crowd of people," said Lynn. "Large crowds could cause fear and anxiety for people coming to get care.... Imagine if you were going to a doctor's appointment and had to walk through groups of people to get into the building."

Lynn discourages calling health centers to request permission to counterprotest as it distracts staff from their primary mission of tending to patients. Anyone who's ever called a doctor's office knows how busy those answering the phone typically are on any given day.

What does bolster abortion providers' morale, in addition to making it harder for legislators to reduce access to reproductive care, is planning supportive off-site events.

"Lots of groups have realized that counterprotests at health centers aren't a great way to support Planned Parenthood, so they are having rallies and events on their own," said Lynn. "Some groups are having 'speak-outs' for patients (past and present) to talk about why Planned Parenthood is important to them. I've heard of events happening in areas where Planned Parenthood doesn't even have a health center! I think it's encouraging to see people organize, rally and mobilize to support an organization that millions of people across the country rely on for care."

The Stakes of the Fight Over Planned Parenthood

While abortion care only constitutes 3 percent of Planned Parenthood's services (leaving between 60-80 percent of abortion care to independent clinics), Planned Parenthood's clinics are the most visible target of abortion rights opponents thanks to perpetual congressional investigations and posturing from anti-choice legislators. Ending the long-standing reimbursement to Planned Parenthood for preventative care, such as contraception, annual exams and cancer and STI screenings through Medicaid was an immediate focus of the majority of Republicans for the new legislative session. Reproductive health care advocates know that these services are vital, and many who work and volunteer for independent clinics also work in various ways with Planned Parenthood.

Kim F. Chiz, a registered nurse and executive director of the Allentown Women's Center in Bethlehem, Pennsylvania, described the cooperative relationship between the clinics in her area.

"In Pennsylvania, we regularly refer patients to Planned Parenthood and they send patients to us; Planned Parenthood's patients are our patients too," Chiz, who is a board member of the Abortion Care Network, told Truthout. "Defunding Planned Parenthood will make it much harder for our mutual patient populations to access the care that keeps them healthy and allows them to live full and productive lives. So many of these folks are low-income, uninsured or on Medicaid. They are already struggling to access health care services."

In poll after poll, year after year, Planned Parenthood and other reproductive health care providers rank higher in public opinion surveys than most politicians elected to Congress. The scope of the care offered and the accessibility for marginalized people are among the reasons for this popularity.

The effort many clinics put into serving the entirety of their communities extends beyond their doors. Joyce Arthur, executive director of Abortion Rights Coalition of Canada (ARCC), has seen her share of picketers and discourages counterprotests not just to protect the privacy and confidentiality of patients, but as part of a "good neighbor" policy clinics across North America ascribe to.

"Clinics often work hard to fit into their neighbourhood and be good neighbours; they want the support of their community, not enmity," Arthur told Truthout. "Protesters hanging around a clinic -- especially a lot of them -- can disrupt the neighbourhood, anger and upset residents [and] interfere with nearby merchants.... Resentment against the clinic can build and privacy, economic and safety considerations can cause neighbors to complain to police and the city -- even if they are pro-choice and otherwise support the clinic."

Planned Parenthood of Greater Ohio sent an email to its supporters encouraging people to demonstrate and march off-site as well.

"Counterprotests increase the risk of confrontation between opposing parties, increase the likelihood of media coverage for anti-abortion protesters, and make it harder for local police to control the situation in front of our facilities," the email said.

Instead of demonstrating outside of Planned Parenthood, Arthur suggests demonstrating outside a "crisis pregnancy center" -- one of the fake clinics run by ideologically extreme religious groups -- or at the office of a local anti-choice group. Also on her list are public areas like city hall.

"I often encourage folks to hold any kind of alternative event too," she said, "preferably something pro-actively pro-choice like a speaker's panel, a film night, a letter-writing party, etc. That may be a lot more constructive than protesting an anti-choice protest."

Other independent clinic staff who spoke with Truthout suggested demonstrating in support of reproductive health facilities in locations that are visible to the community like restaurants and retail areas.

Ashley Gray, cofounder of a clinic escort program in northern New Jersey, told Truthout that her first impulse was to counterprotest, but her many hours of protecting patients from screaming picketers quickly led her to seek out other ways to support her community's Planned Parenthood.

"We knew that increasing the presence of people outside may only make the situation worse for the patients and staff," said Gray. "Instead of a counterprotest, we'll be mailing supportive postcards to the clinic in the days leading up to the event so that they know that, even though we are not physically there, we are still with them in principle and are grateful for the amazing care they bring to their patients."

Volunteering remains one of the best ways to support Planned Parenthood and other clinics; it may be less cathartic than a counterprotest, but it's typically more rewarding and helpful. Other supportive steps Lynn suggests include becoming a patient and speaking out about your own experiences.

"Hearing from patients is so important to get the word out about the great care that happens at Planned Parenthood," she said. "Patients have even been bringing in flowers or baked goods to health center staff in the last few months. Patients want to make sure they stand with us as much as we stand with them. A great way to support health centers on a day when a protest is scheduled could be to send a cake or some cookies to let staff know you are there with them."

Donations, of course, are always on the list of ways to support an organization you believe in. Lynn understands that not everyone has resources and encourages creativity and community-building get-togethers.

In a moment when legislators -- both at the state and federal level -- are being asked to decide whether funding is cut or eliminated and #Protest PP is successful, speaking out loud and strong for abortion access and reproductive justice is more important than ever.

Copyright, Truthout. May not be reprinted without permission.  Thanks to Truthout for granting permission for this reprinting.

Katie Klabusich is a contributing writer for The Establishment and host of The Katie Speak Show on Netroots Radio. Her work can also be found at Rolling Stone, RH Reality Check, The Toast and Bitch Magazine. Follow her on Twitter: @Katie_Speak.