Solidarity with Immigrants or Welcome to the Police State of America; California Example: Training - Solidarity and Defense Against Immigration Raids

President Donald Trump wants to impose a police state on undocumented immigrants. Workplace raids - sometimes called 'silent raids' - have been a mainstay of immigration enforcement, will likely ramp up. Now - predawn raids, arrests and deportation of undocumented immigrants who have been convicted of the most minor criminal offenses, and stops of dark-complexioned motorists and pedestrians - will become the norm, in the new anti-immigrant policy to be soon rolled out. 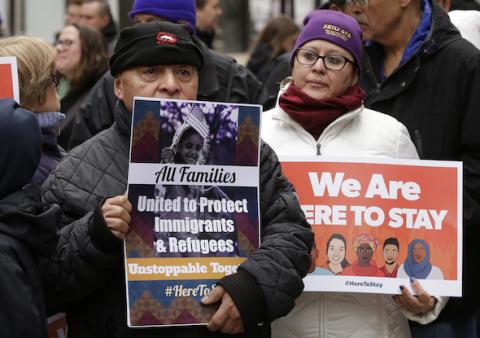 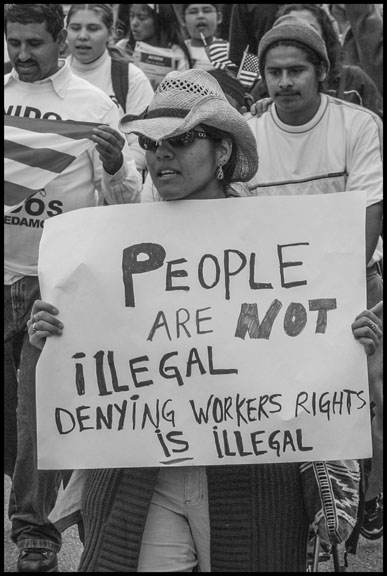 Fifteen thousand people rally and march in San Francisco, demanding legalization and equality for undocumented immigrants.
Photo credit: David Bacon
STOP IMMIGRATION RAIDS AND FIRINGS!
English and Spanish here.
Raids and the threat of more raids is upon us.  Please join us at a training about workplace raids and immigration enforcement affecting workers:
Saturday, Feb. 25th from 9am to 12noon
Carpenter's Local 713 Union Hall
1050 Mattox Rd, Hayward, CA 94541
The legal rational for workplace enforcement -  called Employer Sanctions - became part of immigration law in 1986.  Over the last few Administrations workplace raids - sometimes called 'silent raids' - have been a mainstay of immigration enforcement and will likely ramp up under the Trump regime.  Immigration enforcement has included firings for immigration status, raids and detentions at work, streetcorner raids and others, and we may face any or all of them.
The training has 3 goals:
Help our communities, our workers and our unions get ready.  Come on Feb 25th.
Everyone is welcome - knowing our own history and sharing critical information is important to all advocates who want to resist Trumps attacks on immigrants and refugees.
If you have any questions, please contact Lillian Galedo (Filipino Advocates for Justice), 510-409-1679 or Agustin Ramirez (ILWU), 916-606-4681
Spanish/English simultaneous translation provided.